MI5 Announce Plans To Hide CCTV In All UK Toilets

Posted on 5 November, 2015 by Ethan Harrison 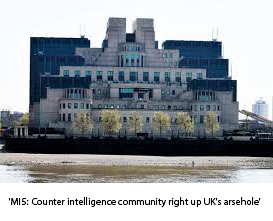 MI5 have announced new breath-taking plans to force new legislation through Parliament, making it obligatory for all UK toilets public and private to possess hidden CCTV equipment. The plans, known to be backed by David Cameron’s Government, are thought to be a response to the growing threat of terrorism everywhere, which is now thought by top terror officials most likely to originate from the home.

A spokesman representing MI5 laughed, “After our successful work, homegrown terrorism is now the UK’s biggest security threat. A threat that could come from the places you least expect. That’s why hidden toilet cams, or WCTVCCTV as we call it in the counter intelligence community, are so important. This unobtrusive machinery, digi-box and 3G booster, plus four annoying visits every month from one of our rude employees trying to make it work properly is for your own safety and peace of mind, and essentially for many reasons. One: These mass data dump collections are an integral part of modern information gathering. Two: The toilet rim of your bathroom and your arsehole are the only place that we don’t currently have a microphone or computer recording what you’re saying. Three: We’re literally and clinically a bunch of perverted psychopaths who receive morally delinquent pleasure looking at people’s private shit.’

Former MI5 spy lifts the lid on working for the intelligence …

11 Oct 2015 – Annie Machon worked for MI5 for five years before spending two years on the run. … I put my boyfriend in hospital… and I had sex on a web cam: Mirror … Cops say 12-year-old victim of ‘shop toilet sex attack’ was ‘not unwilling ...

View all posts by Ethan →
This entry was posted on 5 November, 2015 in homepage and tagged current events, Ethan Harrison, politics, satire, Social Comment. Bookmark the permalink.