This was planned to end on 26th April 2020 but got closed down by the Cocvid-19 pandemic. 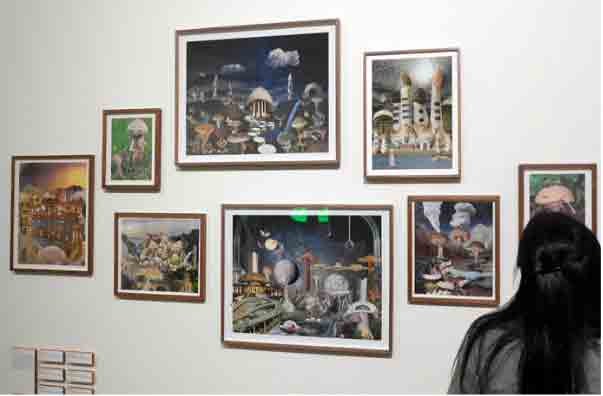 Alan Dearling says: “A nicely bonkers mix of the science, art, poetry and the mind-altered states encountered by the disciples of Magic Mushrooms”.

A stimulating psychedelic trip into the creativity that 40 leading artists, writers, designers and musicians have discovered through Mushrooms. Exhibits offer examples of the fungi’s colourful cultural legacy, as well as some highly evocative re-imaginings of our relationship with the planet.

‘Shrooms’ have fascinated, intoxicated, stimulated and probably killed off many people over the centuries. Their use in ritual ceremonies has led to many expeditions to Mexico and beyond in search for the Magic Mushroom. Whilst closer to home, the annual psilocybin harvest offers a free crop of this hallucinogen and a gateway, a portal to ecstasies.

As I wandered around the exhibition, I found myself recalling the authors that I have read books by. The many mind-explorers who have harked the call of the Magic Mushroom. It’s quite a roll call. It includes Timothy Leary, Aldous Huxley, Robert Graves, Carlos Castaneda, Lewis Carroll, Gurdjieff, Fraser Clark and my old friend, Jeremy Sandford. In the case of the Reverend Dodgson (aka Lewis Carroll) I rather favour the theory proposed by author Mike Jay, who wrote about Dodgson’s one and only visit to the Bodleian Library in Oxford in the ‘Fortean Times’ in 2003: 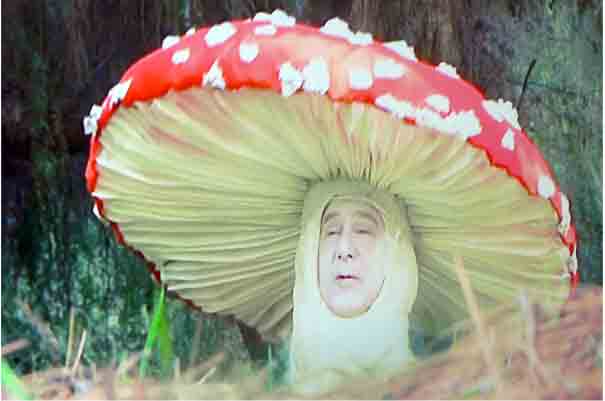 “Mordecai Cooke’s recently-published drug survey The Seven Sisters of Sleep (1860) had been deposited….(in ) The Bodleian (Library) … (the) copy of this book still has most of its pages uncut, with the notable exception of the contents page and the chapter on the fly agaric, entitled ‘The Exile of Siberia’. Carroll was particularly interested in all things Russian: in fact, Russia was the only country he ever visited outside Britain. And, as Carmichael puts it, ‘Dodgson would have been immediately attracted to Cooke’s Seven Sisters of Sleep for two more obvious reasons: he had seven sisters and he was a lifelong insomniac’.”

In the ‘Mushrooms’ exhibition there is a selection of copies of Lewis Carroll’s Alice books showing a variety of artist interpretations to accompany the description of Alice’s experimentation, her partaking of a mushroom, which appears to have magic properties. Here’s the original ‘Alice’ source of the famous Grace Slick song, ‘White Rabbit’, which countless music fans have used as an invitation and permission to ‘free their heads’!:

“This time Alice waited patiently until it chose to speak again. In a minute or two the Caterpillar took the hookah out of its mouth and yawned once or twice, and shook itself. Then it got down off the mushroom, and crawled away in the grass, merely remarking as it went, ‘One side will make you grow taller, and the other side will make you grow shorter.’

‘Of the mushroom,’ said the Caterpillar, just as if she had asked it aloud; and in another moment it was out of sight.” 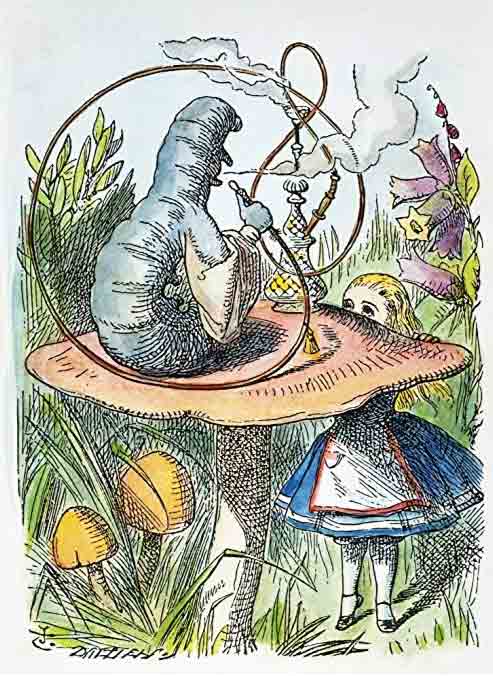 Here’s a nice mash-up of images to accompany the Jefferson Airplane version of ‘Go ask Alice: White Rabbit’: https://www.youtube.com/watch?v=ug2EcWkb26I But not everyone knows that Grace had actually written the song back in 1965 and performed it with her brother, Darby Slick’s band, The Great Society.

Returning to Jeremy Sandford, his book, ‘In Search of the Magic Mushroom’ has pride of place alongside Alice’s Adventures in the exhibition. It was first published in 1972, a few years after Jeremy found fame and much public acclaim as a social commentator with ‘Cathy Come Home’ and ‘Edna the Inebriate Woman’. To be honest, the book and its tale of Jeremy’s adventures in Mexico in search of magic mushrooms is a bit of a mess. He comes over as rather rich adventurer from England in search of cheap thrills and lays. But buried in its pages are some really wonderful and extremely vivid descriptions of the out-of-body effects of eating mushrooms, such as,

“I cut a small piece, less than half an ounce in weight, from the edge of the mushroom. I ate it. It had a very pleasant taste, not at all bitter…Slowly at first, and then more rapidly, I felt a mad rush in my mind, a sense of being riveted to the night sky outside the car. My vision became altered and there were auras around the stars and over the horizon…I walked to a large rock on the beach and sat on it…I really felt at one with the elements around me…as the waves came in, they seemed to shatter like glass on the rocks…Everything seemed to slip sideways in time. Time seemed warped somehow…I had what I believe was a discourse with God. I just called God up and invoked Him on an imaginary telephone, a sort of Dial-a-God system. I talked to this internal presence of Him about my problems, and I can remember receiving back simple straightforward answers to my complicated questions.” 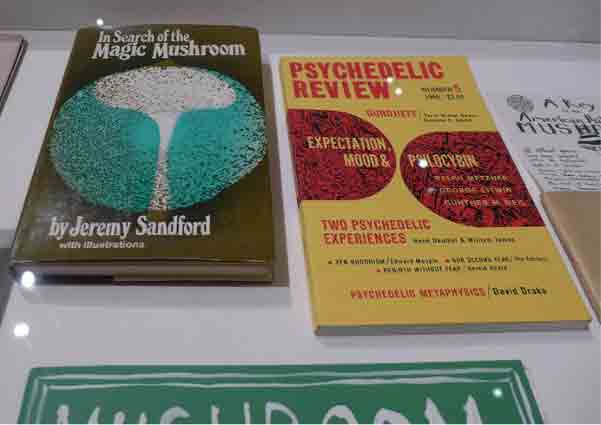 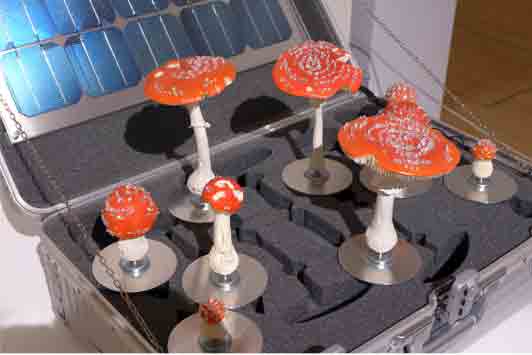 ‘In Search of the Magic Mushroom’ also includes a fascinating and well-researched Appendix: An Essay on the Divine Mushroom in Literature. It’s something of a tour de force charting up to 4,000 years of the Divine Mushroom – God’s Flesh – and, the ‘food of the Gods’ (‘bromatheon’ for the Greeks) in writings from around the world. To my mind, Jeremy is one of the few writers who wrote from much personal experience that, “The bemushroomed person is poised in space, a disembodied eye, invisible, incorporeal, seeing but not seeing…For the Greek ‘ekstasis’ means flight of the soul from the body. Can you find a better word than that to describe the mushroom state?”

Likewise, I’ve always been taken with the following description of the ‘psilocybe effect’ from Lynn Darnton in Oz magazine, 31, in 1970: “My eyeballs have just been cleaned and see how the new world looks!” 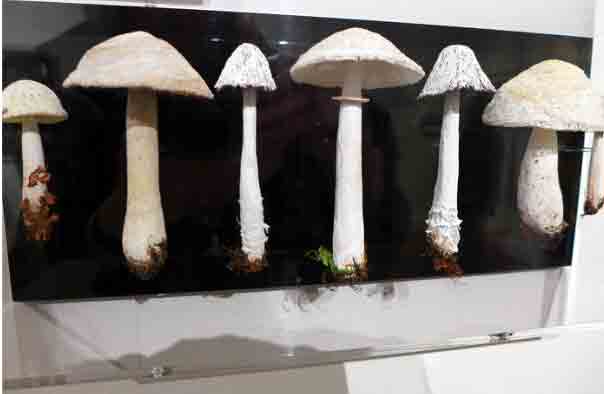 I hope you enjoy my photos of some of the fascinating exhibits. Go see the Somerset House Mushrooms’ exhibition. It’s worth the Trip! 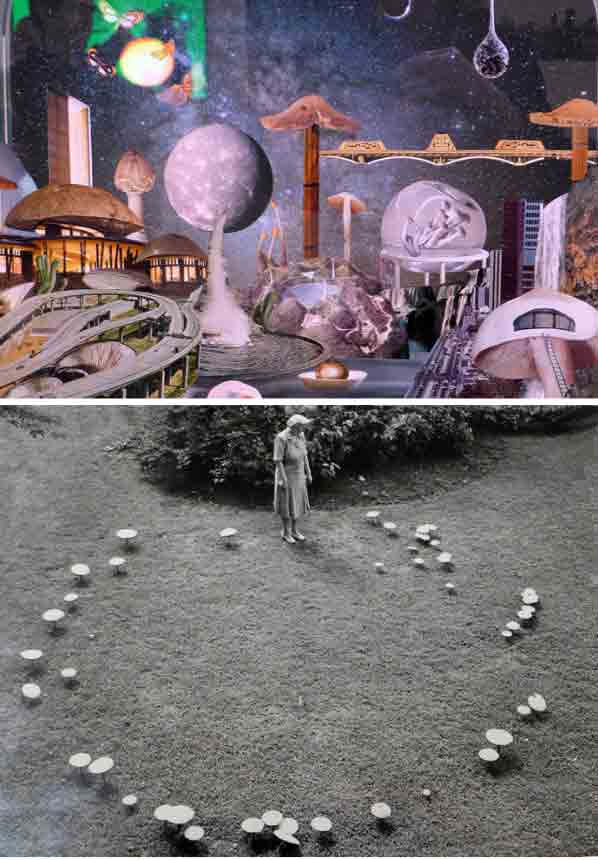 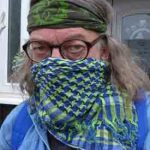 Tweet
Tweet
This entry was posted on 2 May, 2020 in homepage and tagged Alan Dearling. Bookmark the permalink.