Ode to an English Tea Pot 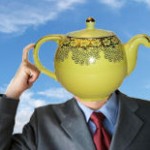 Philosophy too has power; although again, it is not of the institutionalised kind.

Some philosophies have reached down through millennia to influence the mind of man and point along a more righteous path than that of base animal instinct. While others, not so benign, have led through metaphysical dilettantism to basic distortions of reality which are now accepted without question

The most bizarre views on ‘daily life’ often spring from knowledge which is at root quite commonplace. For instance, a teapot is a ‘thing’, and like most other ‘things’ it has a common name: ‘Teapot’. A hat is a thing which also has a name: ‘Hat’. Everyone knows this. Nevertheless, they are both things, and remain so whatever they are called. This is an irrefutable fact.

If all objects are ‘things’, then as such, and at the primal level, they are all the same, since that plane is homogenous with all its parts and therefore without language cannot be fragmented into separate things.

This separation is accomplished by associating each thing with a unique name. The uniqueness of this name is necessary, since if trees and birds and all other things were called ‘teapot’, one might as well call them nothing at all. Being given a name however, they become intellectually abstracted from the primal field of awareness and then appear to be items separate from that plane and each other.

This intellectual view however, is an illusion, since despite this view, the thing itself remains in essence unchanged, and is still a ‘thing’, while the name with which it is endowed is nevermore than entirely subjective to the observer (ask any Chinaman).

This transition from the view of that which is, as it is; to a world entirely composed of named ‘things’, is an important shift, since at that point the primal view becomes overlaid with an intellectually imposed structure, which with use, then becomes associated with ‘reality’, and the vision of that truly nameless world becomes the last resort of sub-borderline nihilists.

Naturally, in the everyday world it would be awkward were these unique names to fall into disuse, a condition, which, to paraphrase Descartes’ complacently misguided maxim, might lead to the obvious alternative.

‘I think, therefore I am a teapot.’

View all posts by David →
This entry was posted on 8 January, 2013 in homepage and tagged dave tomlin, Mike Lesser, Philosophy, Philosophy and teapot. Bookmark the permalink.