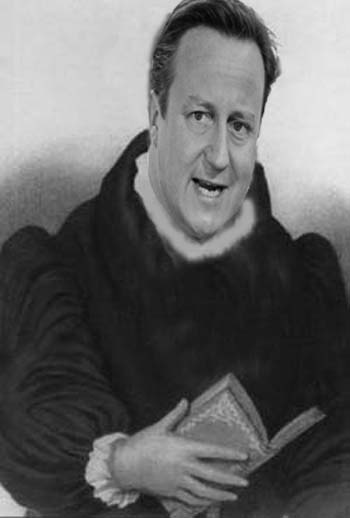 behold the Tory reader in his history books

robed as a Puritan rather than pinstriped in City suit

praying for a plague to fall on the Renaissance theatre

their bronze-age book was to be displaced by Shakespeare

even as the poet was translating the King James Bible, thus

evolving his people with both secular and religious verse

those early Tories refused to wash their souls at the Globe

but gnashed at the St. Paul’s Cross

to poetry, who instructed them to look into the Wooden O

and behold the Devil’s Dam, the mother of Sin and Death,

to whom they would lose this intellectual fight-to-the-death,

fading from life’s pages, life’s stages, to be born in new costumes

behold the modern Tory and his ‘progressive’ Unionist allies

fulminating and judging from secular and religious pulpits,

voicing their gospels of hate via The Daily Mail, always war-drumming,

who have no culture but the Masonic lodge and golf club

today they’ve progressed to two books, the Bible and Shakespeare,

but remain incapable of Biblical or Shakespearean love

don’t warn them they’re Goliaths not Davids, militant philistines
not
‘The Chosen’

behold the modern Tory in his history books….

View all posts by Niall →
This entry was posted on 7 January, 2013 in homepage and tagged A Tory Reader (ed. Niall McDevitt, Shakespeare, St Pauls Cross, the Tories as philistines, the Tories as Puritans, Tory philistinism, William Prynne. Bookmark the permalink.

2 Responses to A TORY READER