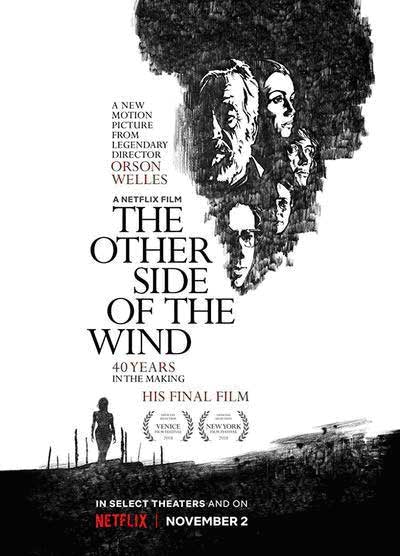 At last, it enters the air, Xanadu bred, yet transcendant,

The restorative breath from a dead man, blown from his limb like cigar,

His partner. Separated from the dust of projection and the blanket of death,

Love is loud. Now, after years of legal binds and desertion, Hollywood’s

When labouring under hardship, the digital age granting freedom

After a long campaign and heart fight. Welles’ broken heart was remade

Over the five decades his art modelled. Refashioning himself after failure,

Often induced, rarely his. Reduced to stealing shots here and there,

Over long years of travel, like the child he never was he played puzzle,

With the fragments and shine of his gift. Each completed film set a stamp

That delivered advances, while each one unfinished, pointed to newly

Possible worlds. The Merchant of Venice. The Deep. When Will I Finish

Don Quixote? With each one made over decades, he was both

A father to film and his girls. But it was The Other Side of The Wind that had gained

Mythic status. Its imposed limitations had freed the imprisoned spirit of Welles.

With all of his invention at play, he seemed to return to the piano,

Unplayed since the untimely death of his mother, now shots were sounded

With a classical thrust, in light spells. And yet there is also jazz in this film,

As sections move within filmstock. The capturing of the protagonist

Which is itself screened in parts, forcing its waiting audience into travel,

Echoing Welles’ own  geographical efforts to finance his films and convince.

Hannaford’s film has no end. His successful protégé, Brooks Otterlake

Will not help him. Played by Peter Bogdanovich there are shimmers of the unspoken

Bond, Welles felt fall. The end of Hannaford’s film is his death in his car

And there is an eerie premonition too  in this journey, as if Welles new too,

That to finish his most personal piece housed death’s call.

As the house party reigns on and Hannaford, as played by the great John Huston

Finds kingdom, a host of press cameramen  film and their different angles and views

Form each shot. From Closeup, to Wide, from Reverse Angle to Long Shot,

From Black and White back to Colour, from 35 mil to 16, a new way to watch

And receive is both startling and inventive. An equal to Citizen Kane’s famous

Then there is Hannaford’s film in the film, a sexual pursuit that’s soul driven,

In which a Sioux  tanned Oja Kodar becomes the most desirable woman in skin.

Her stare is magnetic. Her shape in a bathhouse or on bedsprings could fire

All predilections to end their current wants and begin.

She represents the older man’s need of the young, as evidenced by the art film.

Reproduced Pasolini, and Antonioni too that defines what a master he was

Of both word and image. These silent scenes are sex opera, searingly sung

Through the frame. As Hannaford’s acolytes throng and the scenes are experienced

By them, we in watching one master see the greater one at his game.

Welles was playing with death while being vibrantly alive at each moment,

Creating unsurpassed energy then and at great distance when both peace

And heavy pocket allowed. He made this instant myth, a comment on his own reputation,

On the edges of Hollywood’s gardened crowd. The great director deposed.

With the once tamed winds blowing wildly. But like Lear before him,

Welles could still command ‘cataracks.’ ‘Hurricanoes’, too, there’s no doubt,

And there are aspects of the heath to this movie. Outside the town, on the outskirts

This wounded wastrel had art and fury about him as he mounted and waged his attack.

This final  film is a song, formed in different keys and arrangements.

Its notes are tuned freely and some of it tone improvised

Through both light and though shade, here’s our prize.

A film made from scaps, and which, in being scraps is not perfect,

But which, seen as music for both the memory and the eye,

For both the wind the weather and the forces behind why we die.

Shady finance locked  this film, but devoted hands sought to free it.

Stefan Dressler in Munich and then a host of colleagues after him.

From one side of life, to the other. With his last breath still exhaling,

Even after death, Orson wins.

Tweet
This entry was posted on 17 November, 2018 in homepage and tagged David Erdos, Orson Welles. Bookmark the permalink.