Poverty in America: Why Can’t We End It?

RONALD REAGAN famously said, “We fought a war on poverty and poverty won.” With 46 million Americans — 15 percent of the population — now counted as poor, it’s tempting to think he may have been right.

Look a little deeper and the temptation grows. The lowest percentage in poverty since we started counting was 11.1 percent in 1973. The rate climbed as high as 15.2 percent in 1983. In 2000, after a spurt of prosperity, it went back down to 11.3 percent, and yet 15 million more people are poor today.

At the same time, we have done a lot that works. From Social Security to food stamps to the earned-income tax credit and on and on, we have enacted programs that now keep 40 million people out of poverty. Poverty would be nearly double what it is now without these measures, according to the Center on Budget and Policy Priorities. To say that “poverty won” is like saying the Clean Air and Clean Water Acts failed because there is still pollution.

With all of that, why have we not achieved more? Four reasons: An astonishing number of people work at low-wage jobs. Plus, many more households are headed now by a single parent, making it difficult for them to earn a living income from the jobs that are typically available. The near disappearance of cash assistance for low-income mothers and children — i.e., welfare — in much of the country plays a contributing role, too. And persistent issues of race and gender mean higher poverty among minorities and families headed by single mothers.

The first thing needed if we’re to get people out of poverty is more jobs that pay decent wages. There aren’t enough of these in our current economy. The need for good jobs extends far beyond the current crisis; we’ll need a full-employment policy and a bigger investment in 21st-century education and skill development strategies if we’re to have any hope of breaking out of the current economic malaise.

This isn’t a problem specific to the current moment. We’ve been drowning in a flood of low-wage jobs for the last 40 years. Most of the income of people in poverty comes from work. According to the most recent data available from the Census Bureau, 104 million people — a third of the population — have annual incomes below twice the poverty line, less than $38,000 for a family of three. They struggle to make ends meet every month.

Half the jobs in the nation pay less than $34,000 a year, according to the Economic Policy Institute. A quarter pay below the poverty line for a family of four, less than $23,000 annually. Families that can send another adult to work have done better, but single mothers (and fathers) don’t have that option. Poverty among families with children headed by single mothers exceeds 40 percent.

Wages for those who work on jobs in the bottom half have been stuck since 1973, increasing just 7 percent.

It’s not that the whole economy stagnated. There’s been growth, a lot of it, but it has stuck at the top. The realization that 99 percent of us have been left in the dust by the 1 percent at the top (some much further behind than others) came far later than it should have — Rip Van Winkle and then some. It took the Great Recession to get people’s attention, but the facts had been accumulating for a long time. If we’ve awakened, we can act.

Low-wage jobs bedevil tens of millions of people. At the other end of the low-income spectrum we have a different problem. The safety net for single mothers and their children has developed a gaping hole over the past dozen years. This is a major cause of the dramatic increase in extreme poverty during those years. The census tells us that 20.5 million people earn incomes below half the poverty line, less than about $9,500 for a family of three — up eight million from 2000.

Why? A substantial reason is the near demise of welfare — now called Temporary Assistance for Needy Families, or TANF. In the mid-90s more than two-thirds of children in poor families received welfare. But that number has dwindled over the past decade and a half to roughly 27 percent. 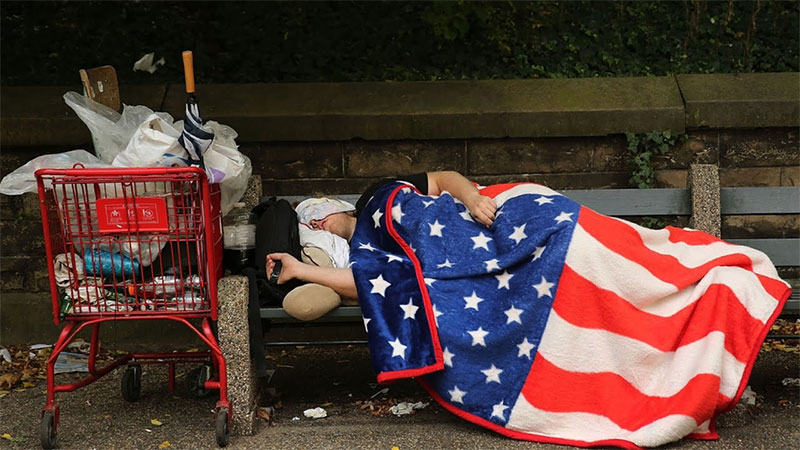 One result: six million people have no income other than food stamps. Food stamps provide an income at a third of the poverty line, close to $6,300 for a family of three. It’s hard to understand how they survive.

At least we have food stamps. They have been a powerful antirecession tool in the past five years, with the number of recipients rising to 46 million today from 26.3 million in 2007. By contrast, welfare has done little to counter the impact of the recession; although the number of people receiving cash assistance rose from 3.9 million to 4.5 million since 2007, many states actually reduced the size of their rolls and lowered benefits to those in greatest need.

Race and gender play an enormous part in determining poverty’s continuing course. Minorities are disproportionately poor: around 27 percent of African-Americans, Latinos and American Indians are poor, versus 10 percent of whites. Wealth disparities are even wider. At the same time, whites constitute the largest number among the poor. This is a fact that bears emphasis, since measures to raise income and provide work supports will help more whites than minorities. But we cannot ignore race and gender, both because they present particular challenges and because so much of the politics of poverty is grounded in those issues.

We know what we need to do — make the rich pay their fair share of running the country, raise the minimum wage, provide health care and a decent safety net, and the like. But realistically, the immediate challenge is keeping what we have. Representative Paul Ryan and his ideological peers would slash everything from Social Security to Medicare and on through the list, and would hand out more tax breaks to the people at the top. Robin Hood would turn over in his grave.

We should not kid ourselves. It isn’t certain that things will stay as good as they are now. The wealth and income of the top 1 percent grows at the expense of everyone else. Money breeds power and power breeds more money. It is a truly vicious circle.

A surefire politics of change would necessarily involve getting people in the middle — from the 30th to the 70th percentile — to see their own economic self-interest. If they vote in their own self-interest, they’ll elect people who are likely to be more aligned with people with lower incomes as well as with them. As long as people in the middle identify more with people on the top than with those on the bottom, we are doomed. The obscene amount of money flowing into the electoral process makes things harder yet.

But history shows that people power wins sometimes. That’s what happened in the Progressive Era a century ago and in the Great Depression as well. The gross inequality of those times produced an amalgam of popular unrest, organization, muckraking journalism and political leadership that attacked the big — and worsening — structural problem of economic inequality. The civil rights movement changed the course of history and spread into the women’s movement, the environmental movement and, later, the gay rights movement. Could we have said on the day before the dawn of each that it would happen, let alone succeed? Did Rosa Parks know?

We have the ingredients. For one thing, the demographics of the electorate are changing. The consequences of that are hardly automatic, but they create an opportunity. The new generation of young people — unusually distrustful of encrusted power in all institutions and, as a consequence, tending toward libertarianism — is ripe for a new politics of honesty. Lower-income people will participate if there are candidates who speak to their situations. The change has to come from the bottom up and from synergistic leadership that draws it out. When people decide they have had enough and there are candidates who stand for what they want, they will vote accordingly.

I have seen days of promise and days of darkness, and I’ve seen them more than once. All history is like that. The people have the power if they will use it, but they have to see that it is in their interest to do so.