Review: In the Court of the Crimson King Director: Toby Amies 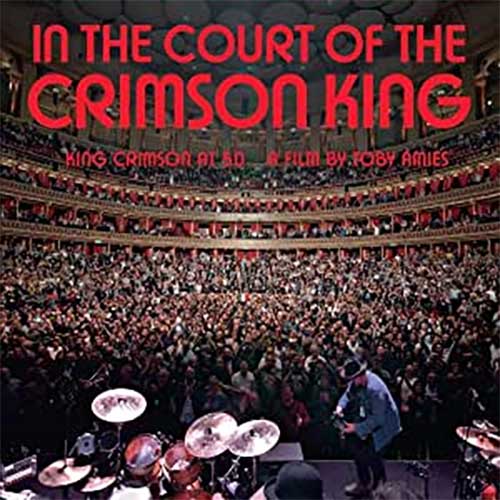 In The Court Of The Crimson King is Toby Amies’ excellent observational documentary about classic British progressive rock’s most celebrated – and derided – surviving band (at least, up to and including the making of Amies’ film. Robert Fripp has since announced his retirement.) The film includes concert footage shot in Tokyo plus extracts from a special performance at Tring Studios. An 8-disc box set featuring the film, bonus content and 4 CDs of concert performances is available online. Crimson do not do things by halves.

Making a film about King Crimson was never going to be an easy task. There is no attempt at a potted history of the band, no Pete Frame family tree, no seasoned journos or members of rival bands expounding on KC’s greatness and importance. Robert Fripp is a renowned curmudgeon who talks about his art in abstract terms reminiscent of the more arcane reaches of esoteric religio-philosophy. He occasionally refers to himself in the third person. One gets the impression that had he chosen a different life path he would have made an excellent Calvinist minister. He talks about taking cold baths as a sanction against personal comfort intended to sharpen the resolve. Give it a break Bob, this is ‘a snob’s Black Sabbath’ for fuck’s sake.

For Fripp, music is sacred and demands discipline of the highest order to do it the greatest justice. Everyone has to suffer. This includes, sadly, the audience, under threat of being removed from the auditorium if they dare raise their phones during a performance. Judging by occasional shots of audience members many seemed to be having a transcendent experience. It all seemed a bit like a religious cult. One of the best live bands in the world? Fripp one of the true geniuses of classic Brit prog?  Undoubtedly on both counts. So yeah, despite everything, job done.

The film focuses heavily on the iteration of King Crimson convened in 2013, the most stable and longest lasting in the band’s turbulent history. In the Q&A with Toby Amies that followed the screening on Sunday November 20th at the Kino in St Leonards, it was made clear that making In The Court Of The Crimson King had been an unpleasant experience. No-one in the band seemed happy – satisfied perhaps, but under heavy manners from Fripp to the extent that it all seemed a bit sado-masochistic. Amies interviews all the band members and does a commendable job of tracking down almost all the surviving former alumni. Composer, sax player and flautist Ian McDonald appeared curiously chagrined by the whole thing, 50 years down the line.  McDonald quit along with drummer Michael Giles only a few months after the band’s debut album, In the Court of the Crimson King, in 1969. This was a move he later regretted. (Happily, McDonald and Giles made their own album in 1970, a record arguably more likeable than anything by King Crimson.) Absent from the 2013 band’s battery of drummers was Bill Bruford, whose tenure ran from 1972 to 1997. It wasn’t clear whether or not he had been asked back, or whether he cared that much either way.

Adrian Belew, looking alarmingly like a much battered punch bag, bemoaned not being included after more than 30 years’ service. According to Fripp Belew wasn’t a team player. Belew said plaintively ‘I think he needs me’. It didn’t look much as if he did. Fripp had assembled a dream band, awesomely skilled and ruthlessly drilled, and firmly in thrall of their lord and commander. If it all needed proving, they proved it.

Was it all worth it?

From a strictly musical perspective, up to a point, yes. On the batch of seven live CDs released since 2014 the band’s considerable legacy – especially the early stuff recorded between 1969 to 1975 – has been given the kind of upgrade only possible since the development of digital tech. Songs that were virtually impossible to recreate live 50 years ago are flawlessly rendered – if anything almost too much so. A little more extemporisation, and the chance to swing without being constrained by continually changing time signatures and episodic arrangements, would have been welcome. The arrangements themselves are seamless, the musicianship exemplary. KC’s music is complex and demanding. Much of it is brutal, yet there are moments of searing beauty. Even so, aspects of it, like most classic prog, are preposterously grandiose. The front line is taken up by three drummers, all playing to a click track. Why this is deemed necessary has remained unclear. Behind them stands the rest of the band dressed like a row of humourless middle managers. No one seems to be having fun. Belew, to his credit, would undoubtedly have had fun, but would have likely tried to steal the show. Sensible, dependable and curiously uncharismatic Jakko Jackzsyk is, for the purposes of this version of KC, a far better choice of de facto frontman.

To his credit, Amies, in trying to make sense of the relationship between Fripp and the rest of the band, shows commendable patience during what was clearly an uncomfortable experience. Behind the camera he manages to largely stay cool while Fripp repeatedly gives him a hard time, for seemingly no better reason than that he can. Some of the interviews are done backstage on tour, some in private. King Crimson is an interesting collection of people. For anyone seriously devoted to KC’s music – and there are many the world over –  this is riveting stuff. There are some poignant moments with Bill Rieflin, who sadly died during the making of the film.

One question that briefly hung unanswered in the air was why, in the nine years of this final, commendably stable version of the band, there was precious little new material and no new studio album. Had Fripp’s well of inspiration run dry? It seemed so. A Scarcity of Miracles, released in 2011 and officially attributed to KC offshoot ProjeKct Three, was an underwhelming collection of material sailing perilously close to yacht rock. Sadly for Jakko, former teen KC fan turned singer and guitarist, this was his only studio recording with Fripp, saxophonist Mel Collins and bassist Tony Levin – King Crimson in all but name.

The impressive run of live albums fills the gap left by the lack of fresh material, one including a film on blu ray of the band live in Chicago. This is the best King Crimson tribute band in the world turning in immaculate performances. Musically there is little to complain about but equally little to really celebrate. As a guided tour of KC’s legacy, the albums do a good job. Is it all a fitting end to a truly legendary career for Fripp? Fripp, ever the tortured perfectionist, seemed ambivalent. Maybe if he’d punished himself and everyone around him harder they’d have achieved something approaching perfection.

View all posts by Keith →
This entry was posted on 26 November, 2022 in homepage and tagged In the Court of the Crimson King, Keith Rodway, Toby Amies. Bookmark the permalink.

4 Responses to Review: In the Court of the Crimson King Director: Toby Amies