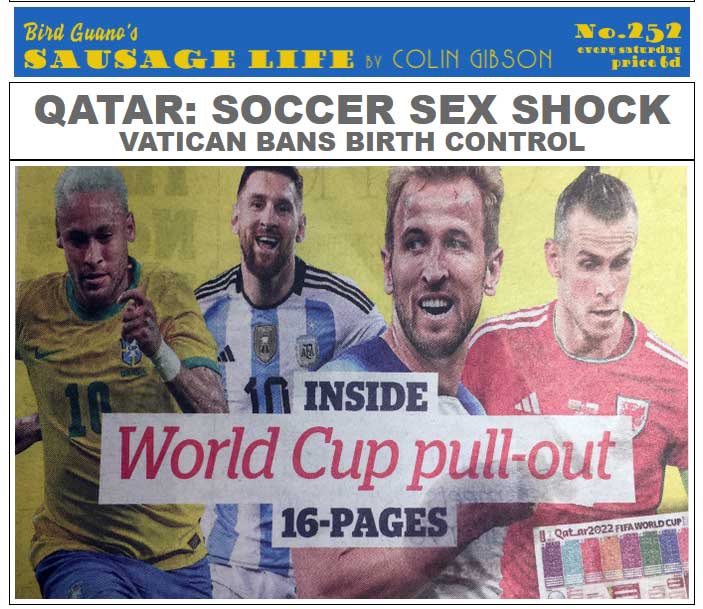 MYSELF: See what a fine mess were in now?
READER: I don’t want to talk about it.

MYSELF: We’re in a right pickle, thanks to you lot.
READER: I don’t even want to hear about it.
MYSELF: Can’t you see what a……
READER: Look! I’ve got my ears covered! La la la!
MYSELF: Read my lips then.
READER: I don’t want to read about it either.
MYSELF: You’re like a one-man three wise monkeys.

Theatre news
FRIDAY AD – THE MUSICAL
Citizens of East Sussex towns are mourning the loss of one if their most enduring publications, Friday Ad. The weekly classified columns livened up many a car journey featuring bizarre items of this type: Honourable, cuddly, vivacious, non smoker, GSOH, adores the theatre, especially Cats – loves people-watching, walking in the rain and beautiful sunsets. Wishes to meet leather-clad biker chick covered in tattoos who likes being tied up for a bit of anal during Strictly”. But what enthusiasts will miss most is Friday Ad’s speciality; the long, tempting description of an article for sale at a bargain price which suddenly and without warning just………
Anyway, fans will be delighted to learn that Friday Ad-The Musical is to be released to coincide with the Christmas holiday. The mega-budget adaptation by screenwriter Daphne Pangolin, directed by Tintin Quarantino with music and lyrics by Lars Öngar and Rita Brevis,  was previewed this week at a secret location which I was lucky enough to attend. Felicity Smallgoose of film buff magazine The Upper Dicker Megaphone described it as “a tragicomic triumph”. Amongst the featured songs, the stand out numbers for me are No Time Wasters sung a capella by six piece vocal group The Project Enthusiasts and the tear jerking ballad Buyer Collects performed by the entire cast at the film’s heart rending conclusion, the nature of which I cannot, in the grand style of Friday Ad, reveal..

CHAIN SNORING
Hastings’ prolific inventor, professor Gordon Thinktank has been hard at work in his secret underground laboratory in the basement of The Horse & Nightmare in Cockmarlin, on what he describes as “a breakthrough for sufferers of sleep apnoea”. The process involves the amputation under local anaesthetic of the entire nasal area, completely replacing the the nose and its accompanying cavities with a realistic plastic prosthetic made from sustainable plastic waste. “Lest we forget,” the professor told us, “nocturnal trumpeting is the number one cause of the UK’s rising divorce rate. My device, which I call The Chainsnore, is a genuine technological breakthrough. The false proboscis looks and smells just like the real one, but installed in the “nostrils” are a number of tiny strings of varying length, and tuned to the mixolydian scale, they play haunting melodies when caressed by the escaping wind of the sleeper, instead of the usual terrifying road-drill. My prototype currently plays Ravi Shankar’s Raga Rageshri or That Toothbrush Ain’t Gonna Mow The Lawn by Imaginary Chairleg, but a larger selection will be available by the time The Chainsnore reaches the shops.”
Meanwhile, work has been suspended on another of the inventor’s patent applications, which he describes as “a pyramid-shaped tupperware box, which keeps soup hot even in the fridge, and also sharpens razor blades” until unspecified health & safety issues have been resolved.

Sport
THE BIG FIGHT
By our boxing correspondent Rod Dulle
Tickets for next week’s grudge match at Herstmonceaux’s Hernia Arena between current champ Typhoon Anger and challenger Sean “Punchbag” O’Hulahoy are going like “shit off a shovel” according to promoter Bert Wormhole. “Calling this the fight of the century would be the understatement of the millenium. Its going to be more like Alexander the Great versus Louis XVI, or Benito Musselini versus Doctor Who”.
“Anger is all washed up”, O’Hulahoy’s manager Georgiou Falafel told us, “he’s like a draining board full of plastic forks. I’ve watched him sparring. His footwork is like a one-legged tap dancer wearing a pantomime horse costume. As for his so-called fists of fury, he couldn’t punch a bus ticket even if the bus ticket was tied to a lamp post”.
“Nonsense” declared Anger’s born-again manager Ron Maserati  “Let’s face it, Punchbag  is a wuss. He watches Strictly Come Dancing and has a tiny dog, a paradoodle which he carries around in a pink handbag. My boy owns two Irish Wolfspaniels, both called Tyson, one of which is on parole for attempted murder and has to wear an electronic tag, the other is a paranoid schizophrenic with its own gym in East London. Typhoon’s footwork has been compared to Torville and Dean if they had skated for The Bolshoi Ballet. His fists are like two atomic bombs having an argument in a night club. ”
The fight will be preceded by a performance of Dark Side of The Moon by tribute band Pink Fraud

YOUR STARS
Aquarius (21 January-19 February)
Aquarians should consider themselves lucky. On the 19th a large truck containing nitro glycerine narrowly avoids crashing into your house and the gas runs out shortly after you go to the shops leaving a pan of chips on.
Pisces (20 February-20 March)
Buy shares in anything beginning with Q except Qatar, as the letter U is empathising with your rising sign of Stradivarius.
Aries (21 March-20 April)
A letter from a dead aunt arrives containing a postal order for five shillings which you spend on one sock. A cigarette end lodged in your underwear may lead to divorce
Taurus (21 April-21 May)
Jehova’s Witnesses kidnap your children and threaten to kill them unless you take them out for a pizza. Resist the temptation to refuse as they are ruthless psychopaths. A cheerful squirrel waves to you from across the street.
Gemini (22 May-21 June)
Are you actually really a Gemini? Check your birth certificate, driving license or a utility bill. Better safe than sorry.
Cancer  (22 June 23 July)
Saggitarians hate you. Don’t leave the house on the 29th as two of them are waiting near the bus stop to beat the crap out of you. A grocery bill seems depressing at first, but you get over it.
Leo  (24 July-23 August)
With Taurus hovering, a holiday in Rhyl could spell disaster, go to Aberystwyth instead, even if its’s raining.
Virgo (24 August-23 September)
You’re not seriously going out in those trousers are you? You look like a French mime artist with hemorrhoids.
Libra (24 September-23 October)
Hard boiled eggs and turkish delight should be avoided on the 26th. Your watch stops at 11-20, leave it there, it suits you.
Scorpio (October 23 – November 23)
Leave town, everybody hates you. A parcel arrives on the 27th containing a horse’s head.
Saggitarius (24 November-21 December)
Saggitarians have a cause to celebrate! Venus leapfrogging Mercury and narrowly missing Mars on the 30th leads to a brief but intense romance with a tree surgeon.
Capricorn  (22 December-20 January)
All your cutlery goes missing on the 23rd due to Saturn’s misalignment with Pluto. All ends well however, as the police arrest your cleaner and retrieve everything except the forks. 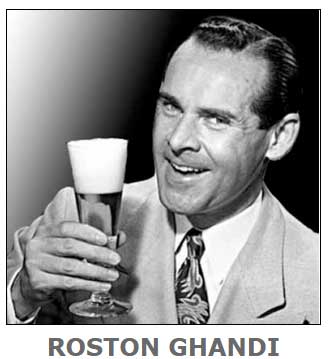 I wonder if I left the gas on?
An explosion at this time of night
Would be most inconvenient,
Especially in this neligee.
If I get up early enough I can get to the paper before the dog.
Hang on, we haven’t got a dog.
That smell must be something else.
A piece of tuna behind the sofa perhaps
Or some camaembert under the stairs.
What was the name of that footballer?
You know, the one with the orange hair
And the race horses.
Bobby? …Tommy?…Jimmy?  …..
Maybe it wasn’t a footballer
Perhaps it was a jockey.
Yes, that would certainly account for the horses,
But not the orange hair.

View all posts by Colin →
This entry was posted on 26 November, 2022 in homepage and tagged Colin Gibson, SAUSAGE LIFE 252. Bookmark the permalink.