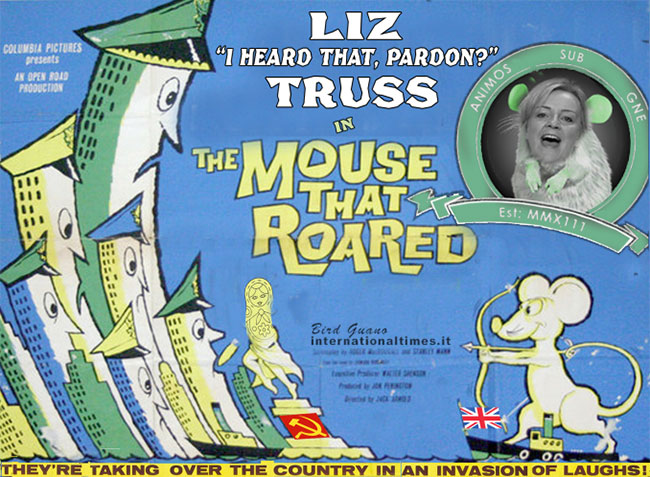 SAUSAGE LIFE
Bird Guano
The column which leaps before it looks

READER: So what are you doing for Valentine’s Day?
MYSELF: The same as I do every year. The night before, I have my friend Banksy stencil a satirical depiction of the whole money-making Valentine’s Day jiggery-pokery on the side of my girlfriend’s house.
READER: Lucky girl, I love Banksy! Let me guess, did it feature hearts with legs, running off with bags of money?
MYSELF: No. Then I fly her to Las Vegas for the day in a private jet and we get married in the Elvis Presley Memorial Chapel.
READER: I’m so impressed! I never knew you had it in you.
MYSELF: Then, in the helicoptor on the way to Reno for a quickie divorce, we usually breakfast on a Marks & Spencer’s Love Sausage*.
READER: The M&S Love Sausage! What an utterly brilliant idea! Who says romance is dead?

THINGS TO DO WHEN YOU’RE WORKING FROM HOME
1. Watch television.
TV is especially sparkling during half term, and often features films designed to get you off to sleep after lunch, so that the children can steal your alcohol. If you don’t own a television, buy something else to stare at, like a tank of tropical fish, or a tasteful nude by Modigliani.
2. Sell your soul.
A Faustian pact always livens up a dull holiday – remember, you can always hire one if you need it.
3. Take up surfing.
It keeps you fit, and a surfboard will always double as an ironing board in an emergency.
4. Learn to play a musical instrument.
A jaunty tune played on the pianoforte will make any party go with a bang, even if you are the only one there. However, a word of caution; in earlier times, music was made by professionals with dinner jackets and music stands and waxed moustaches which curled up at the ends. Today it is all leather trousers, electronic organs and stereophonic gramophones, a combination which quite frankly does not cut the sartorial mustard, so do make an effort to dress properly!
5. Apathy.
Apathy is the UK’s fastest growing hobby, and it’s easy to see why. Anyone can do it – all you need is an interest in virtually nothing, and a broad range of things to not care about.
6. Make your own crackers.
It doesn’t have to be Christmas to enjoy a cracker. All you need are the following items: some hollow cardboard tubes, such as you might find in a toilet roll, colourful crepe paper, twisty freezer-bag ties, a small quantity of nitro-glycerine or plastic explosive, some cheap plastic novelties and most importantly, a funny joke or riddle. Here is an example to start you off:
Q: What is the difference between a betting company and a letting company?
A: You don’t have to show the betting company two year’s bank statements.

NEVER A BORROWER OR LENDER BE
The story of the Welsh taxi driver who borrowed a lawn mower from a neighbor and modified the engine to power a drone which he used to smuggle wet wipes into Wormwood Scrubs has reminded me of a recent personal experience. Last year I lent my sewing machine to a friend for a “quick job” and I didn’t get it back for for three months. I discovered that he had not only used it to completely rewire his house, but had insulated the loft and drained the septic tank with it. It was never the same after that.

BUT IF YOU DO…
I was recently shown around Upper Dicker District Lending Library which, instead of being sold off like many other British libraries, is actually being renovated at great expense. So far, all the talking books have been confined to a separate soundproof section so as not to disturb the other books and security guards with dogs patrol the aisles regularly. I was allowed into the hidden back room, where  the non-payers of overdue book fines are sent. Once my eyes became accustomed to the gloom, I noticed there were several people chained to the wall and from next door I could hear the plaintive sound of a harmonica accompany a wailing, soul-wrenching blues.

IN THE COURTS
At Hastings Crown Court, a decree nisi has been awarded in the case of Mrs Onya Byche of Upper Dicker, who accuses her husband Dennis of mental cruelty. Eric Smorgasbord the solicitor acting for Mrs. Byche, a sufferer from Obsessive-Compulsive Disorder, claimed that “on several occasions when his wife had been called away in her capacity as septic tank night-supervisor at the Cockmarlin Sewage Reclamation Farm, she would return to find that Mr. Byche had, with malice and aforethought, superglued all the furniture to the ceiling but in slightly different relative positions. This caused Mrs Byche to suffer such severe anxiety that she began to pull out her hair and eat it. After one such incident, when her husband had also glued the couple’s miniature Cockapoo Ecoli to the ceiling-mounted sofa from which he was forbidden, she called the fire brigade, who, from an extended turntable ladder, accidentally flooded the two upper floors and the basement of the adjacent building.”
Court was adjourned to decide costs.

MUSICAL CONCRETE
A Pre-St. Valentine’s Day concert by the avant garde composer Arnold Stang packed the first row of seats at Herstmonceaux Colliseum. Stang was here to premier his remarkable new composition Nail Bar which is provoking much controversy in the music world, with Royal Opera House conductor Godfrey Matterhorn describing it as “Worthless tosh thinly disguised as total rubbish”, and Jacob Schooner the outspoken music critic of The Wealdon Advertiser defending the three-hour piece as “A magical neo-realistic dreamscape, an elusive memory wrapped in a blanket of enigmatic tone poetry”.
As someone unfamiliar with Stang’s work, I took my seat with a certain amount of trepidation. The curtains parted and the house lights, along with the audience’s expectant murmur, dimmed. A single spotlight panned along a row of six tuxedoed musicians standing in front of chairs. A French maid entered stage left and produced from her bag a whoopee cushion, which she inflated and placed on the first chair. She repeated the action on all six chairs before exiting stage right.
Conductor Imogen Macarena waved his baton and simultaneously, the six musicians sat down hard on the chairs, causing the whoopee cushions to emit a legato ensemble rasp.
According to Stang’s programme notes, the subtle differences in timbre of the individual whoopee cushions builds up a “nuanced harmonic sub-tonic drone wave, creating a stream of ethnomusicological imitative polyphony.”
After three hours, I was inclined to agree.

View all posts by Colin →
This entry was posted on 12 February, 2022 in homepage and tagged Colin Gibson, Sausage Life 216. Bookmark the permalink.