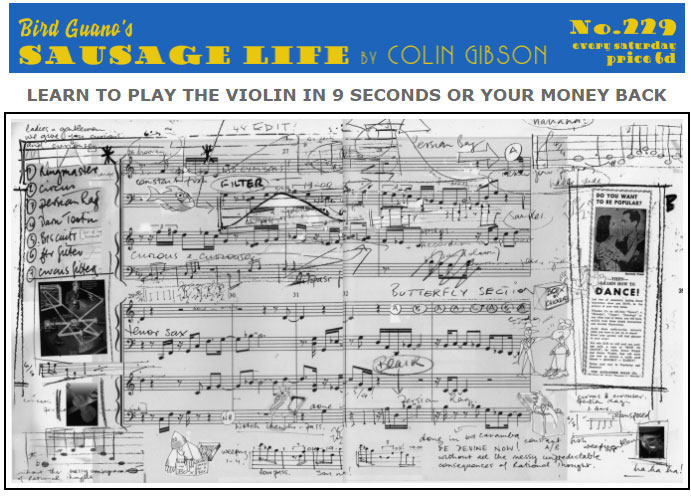 READER: Aren’t you excited about the new series of Killing Eve?
MYSELF: You mean the edgy, award-winning series written by that middle class woman with the hyphenated name who isn’t afraid to write about having sex with priests?
READER: That’s the one! What a cast!
MYSELF: Cast? I’ve seen self-assembly furniture that can act better than Sandra Oh.
READER: I knew I shouldn’t have mentioned it.

FILM FESTIVAL
The fifteenth International Film Festival Of The Unwatchable continues at Upper Dicker Multidrome with a barrage of undistinguished films guaranteed to turn your brain to mush. My favourite was Sven Svenson’s three hour documentary Why Do Eskimos Like Fish? if only for for its bold pointlessness, but you should on no account miss Welsh auteur Wensleydale Parsimoney’s outrageously bland two hander, Vocational Phobias.
Upper Dicker Multidrome until June 9th

STRANGE FACTS FROM AROUND THE WORLD
Notorious career criminal Arthur “Gaslight” Tumult, who, in 1985 was found dead in extremely suspicious circumstances on the ghost train at Margate funfair, would surely be spinning in his grave were he still alive today. Ironically, although Arthur’s promising extortion business never fully recovered, that very same ghost train sold on Ebay recently  for £232,000! The buyer was retired carpet shampoo millionaire Hiram J. Leverage, a republican senator from Paranoia, Texas,  who’s hobby is collecting ghost trains in which people have actually died.

BRAINWAVE
Following his innovative scheme for replacing the seeds in raspberry jam with shredded bus tickets, Hastings inventor Gordon Thinktank’s ingenious new idea is to line overcoats with bear grease to repel beavers.
READER:What use is that? We don’t have beavers in this country.
MYSELF: That’s what’s ingenious about it. You can also wear them when you’re swimming the channel in cold weather.

FOUL LANGUAGE BARRIER
Dejected supporters of Hastings & St Leonards Warriors FC suffered a further setback this week, as their first season in the Hobson’s Denture Fixative League (South) continued to follow a downward trajectory. On his recent controversial appointment to the club, Sicilian manager Sergio “The Horse” Peccadillo delighted reporters after declaring that he would dispense with translators and speak only English during his post match interviews. The recent run of unfavourable results however, appears to have caused the talkative Italian to fall out of favour with Warriors fans. At half time in Saturday’s shock 17-0 defeat against Cockmarlin Thunderbolts, banners were unfurled on the terraces calling for the manager’s dismissal. After the game, Sergio responded robustly to a barrage of questions about his competence saying: “Please direct me to a chemist, I wish to purchase some shaving cream and a disposable razor.” Pressed on whether he intended to offer his resignation, he snorted angrily: “Is there a lifeguard on duty? I have forgotten my bathing costume.”

RAGE & THE MACHINES
Several people were arrested and charged with causing a public affray last Saturday outside the Cats Pyjama nightclub in St Leonards. An argument ensued after two men entered the bar dressed as C-Threepio and Chewbacca, two mechanical characters from Star Wars, and were confronted by three giant security robots. Things rapidly escalated when the two men, and several members of staff who sprang to their assistance were incinerated by a blast from the droids’ 300,000 volt electric death Tasers. “We hold our hands up,” Bob Loaf, the club’s owner told us, “The security robots malfunctioned when their facial recognition systems incorrectly identified the chap wearing the C-Threepio outfit as a hostile cyber-challenge and they acted accordingly. We have contacted Robocop4S, the security company who supplied them and they have promised to look into this. Lessons must be learned”. Police were called by alarmed customers who had taken refuge in the cellar and a helicopter containing an armed rapid-response unit raced to the scene in less than four hours. “By the time my men got there,” Hastings’ police chief Hydra Gorgon told us, “the situation had calmed down somewhat. The unfortunate casualties, sadly now reduced to piles of smoking ash, were declared dead at the scene by paramedics. After a thorough search of the building, we concluded that the two giant security robots had fled the scene and although we have received a reported sighting of the pair in a Ladbroke’s bookmaker in Herstmonceaux, trying to chat up a fixed odds betting terminal, they are still at large. We strongly urge members of the public not to approach them, particularly if dressed as a cyborg”.

Sponsored Advertisement
LEARN TO PLAY THE VIOLIN IN 9 SECONDS OR YOUR MONEY BACK!
Get bowing immediately and be the life and soul of the party! Instant results guaranteed. No need to annoy the neighbours with screechy practicing and boring scales. Imagine – great classical works to folk evergreens like Paddy McGinty’s Goat and Ahoy for the Wooden-Headed Sailor will be instantly at your virtuoso fingertips. Just enter your bank details, mother’s maiden name, name of first dog and a recent photograph and we’ll do the rest: www.fiddleronthehoof.co.uk

MONKEYS vs. DONKEYS
It looks as though the monster raving loonies of UKIP have woken up again. I see the Tory Party had yet another defecator last week. At this rate it won’t be long before they run out of idiots and are forced to put up morons as candidates.
READER:  I think you meant defector
MYSELF:   I think I meant exactly what I said.

INTERNATIONAL POETRY MONTH
International Poetry Month lingers on like a tin of golden daffodils, which prompted me to invite travel writer, explorer and exotic jam maker Hasselblad Van der Voome to contribute something. He has sent us this potted African vignette:

AN OSTRICH
I saw an ostrich, he saw me,
and looking up he turned to flee
with all the speed that he could muster
like a mobile feather duster.

The first ten thousand copies of Hasselblad Van der Voome’s autobiography Hawaii Marmalade will be given away free with family packs of Dawson’s ready to eat luxury wild boar sausages at all branch’s of Lidl from November.

View all posts by Colin →
This entry was posted on 21 May, 2022 in homepage and tagged Colin Gibson, SAUSAGE Life 229. Bookmark the permalink.