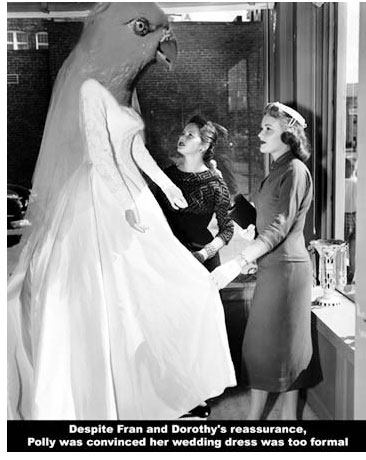 READER: Why the long face?
MYSELF: I’m getting into character.
READER: Gosh, that sounds interesting, what for?
MYSELF: I’m rehearsing for a part in the Meathurst Repertory Company’s production of Warhorse actually.
READER: Really? Are you playing one of the horses? I thought they were all done with puppets.
MYSELF: No, I’m playing Nelson, the Zimbabwean Anteater who saves the life of Staff Sergeant Billy Wagstaff after he is captured by Germans. The Meathurst Repertory Company’s budget will not stretch to puppets, or scenery.
READER: As an actor of note, isn’t it a little demeaning playing an Anteater?
MYSELF: Not at all. I once portrayed a tortoise in A Midsummer Night’s Dream. Compared to that, playing the part of an Anteater is like playing Othello. You should come to the opening night of Warhorse, you’ll love it.
READER: I’d love to! But Meathurst? Where exactly is that?
MYSELF: It’s just before you get to Beyondenden.

A MIDSUMMER NIGHT’S CREAM
Dedicated scientific boffins, working through the night with sometimes only mice or spiders to eat, have suggested that there may be a link between dressing up as a pirate and excessive alcohol consumption. In response, Hastings’ inventor extraordinaire, Professor Gordon Thinktank, has patented what has been dubbed anti-pirate cream, which he claims will curb the obsessive urge to clap a patch over one eye, daub some eyeliner on the other, get drunk and shout at people. The unique formula, made from unpasteurised feta cheese, yams and a secret ingredient he calls Arrgon, will, when rubbed on the temples, produce a profound feeling of soporific tranquillity, allowing the user to experience an idyllic nirvana, far from the hedonistic temptations of drunken dressing-up.

IF “LORD” NELSON WERE ALIVE TODAY
A study by The New Institute for Going Forwarder a Hastings-based radical right wing thinktank, has proposed that Admiral of the Fleet Lord Nelson, after losing one eye in Corsica during the Napoleonic wars, would have been quite unable to properly enjoy today’s 3D films, even when wearing the provided glasses. It is also thought that due to his renowned parsimony – he would often claim “Alas, regrettably I have left my duckets in my other breeches” – the premium 3D admission price would have stuck in the great admiral’s craw as he watched what was, in effect, a regular 2D film. After this, the study claims, his unpredictable temperament may well have led him to bombard the cinema with cannon fire from a flotilla of warships anchored just offshore.
According to the institute however, the admiral’s battle-earned numerical arm deficiency might easily work to his advantage today. Playing tennis would still be difficult, particularly when serving, but advanced robotic prophylactic science could prove to be the perfect solution when it came to playing games like snooker, where a steady cueing technique is crucial in the pursuit of ruthless professionalism. Or darts, which only requires one arm.

SPACE RACE LATEST
Discoverator, the £40million Cockmarlin space probe is “doing very well” according to Captain Rod Dulle, chief spokesman for the East Sussex Control Centre for Space Missions (ESCCSM). Launched in February, the probe, constructed entirely from stolen bicycles and recycled cider cans, is currently travelling at 500,000 miles per hour on a trajectory which, it is hoped, will result in a voyage of discovery unprecedented in modern-day space exploration.

“We hope to establish an orbit around Seepsterboo,” said Dulle, “an earth-like planet on the outskirts of a parallel universe three light years from here known to astronomers as Constellation K99-7H.”.“We suspect that on this planet, Boris Johnson is a mild-mannered reporter with no discernible superpowers working for a great metropolitan newspaper. Wearing thick horn-rimmed tortoiseshell glasses and a blonde wig, he is constantly in amorous pursuit of Helen Hardwater, the glamourous newshound with a secret super-identity: Wombat Woman.”

When pressed, Dulle admitted: “Obviously this theory, containing as it does a great deal of speculation on our part, is not yet factually underwritten, but, if proved to be true, it could set the baffling world of non-existent particle physics on fire. Not literally of course.”
The probe is expected to reach K99-7H by 2252, by which time, according to Dulle, “The global economy will be controlled by a Korean drug syndicate based in Sunderland which is powerful enough to have London and Paris relocated to China. New York will be under a mile-thick sheet of ice, and eventually become the permanent venue for the Winter Olympics. Helsinki on the other hand…..”.

Halting abruptly, Captain Dulle suddenly smiled, reached into his pocket and retrieved a pack of cards, from which we were invited to “Pick a card. Any card. Now put it back. Don’t show me.” At this point we were quietly approached by two white-coated men who very politely asked us to leave, so that trained HMCCSO nurses could administer the captain’s medication.

View all posts by Colin →
This entry was posted on 4 June, 2022 in homepage and tagged Colin Gibson, SAUSAGE Life 231. Bookmark the permalink.