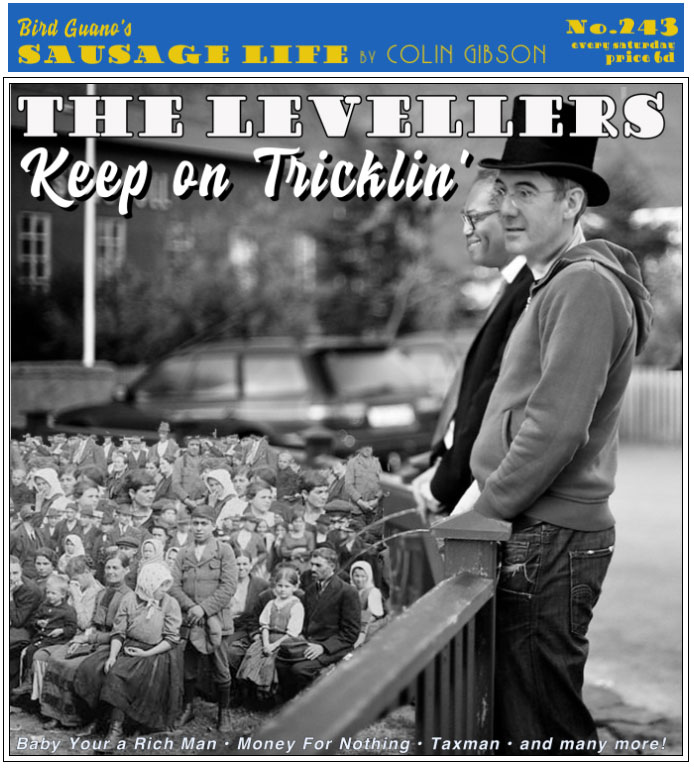 READER: I will ignore that shallow humbuggery, I’m looking forward to it. Do you go out for Sunday Lunch or have a nice homely roast?
MYSELF: I’m from the far north, we don’t do lunch, but having Sunday dinner at home? Are you mad? With the plethora of diverse, local, sustainably-sourced catering on offer?
READER: I know but… I just want a traditional home-cooked Sunday Lunch….
MYSELF: Dinner!
READER: …..dinner, with Yorkshire pudding, roast beef and all the unhealthy trimmings. Restaurant menus are far too pretentious these days. I mean, how do you fry something without a pan?
MYSELF: You don’t, and the problem is this; the people who write these menus are clearly head hunted from estate agents or art galleries. For example, this year I’ve booked a table at ZootAllure on Cockmarlin Marina, and I’m having purée des haricots cuits au four juxtaposed with rod-caught, gluten-free, pan-fried baril de poisson pourri, nestling on a rustic trio of Assaulted Jersey Potato, Hand-Shaved Raw Celery and Violently Crushed Raspberry Stems, all drizzled with a melange des têtards vivants swimming in a marinade of secretly blended Tibetan healing oils.
READER: You lucky thing, that sounds delicious!
MYSELF: I know, but unfortunately, hand-shaved raw celery always gives me heartburn.

HORSES ‘FURIOUS’ AT ROYAL GUN CARRIAGE SNUB
“Where will this end?”  asked spokeshorse Gulzar’s Folly of the Equestrian Employment Board. He was referring to the decision to have the gun carriage bearing the late Queen’s bier hauled by130 infantry marines. “They told us the internal combustion engine would not affect employment opportunities for horses. I need to make no further comment on that promise.”

THE FURTHER ADVENTURES OF HOLMES & WATSON
No. 352 The Golden Earwig of Rangapanga

It was mid-December and Dr. Watson sulked moodily as he flicked through the April 1875 edition of Simpson’s Almanac of Churlish Revenge searching for ideas. He was still bristling from an incident earlier that day, when he had foolishly described to Holmes his attendance at his favourite niece’s school, where she was appearing in a nursery rhyme-themed Christmas pageant. He winced as the afternoon’s events once more paraded mockingly before his mind’s eye.
Holmes had been studying an application from Mr. A.G. Bell for the patenting of his long-distance speaking tube, when the good doctor, clearly upset burst in to their lodgings at 221b Baker Street. During his tearful companion’s relating of the story, the soot-belching cherrywood pipe waggled like the antennae of a praying mantis between the detective’s firm jaw, causing dark, foreboding cumulous clouds to gather ominously around his head. The cynical sleuth, (whose idea of a good Christmas was to lock himself indoors until it went away), idly poked the glowing fire as he tried, unconvincingly, to appear vaguely interested.
It transpired that the school governors had voted that Watson, because of his background in amateur dramatics, be put in charge of acquiring the props for the production, an appointment he was delighted to accept. But the forgetful doctor had catastrophically omitted a very important item from the first piece, Little Miss Muffet, in which Polly, his niece, played the lead.  “Can you imagine my embarrassment Holmes?” pleaded Watson, “I mean, everything was going swimmingly, but as the offstage narrator recited the rhyme’s second stanza, poor little Polly glanced into her bowl and her face assumed the most heartbreaking expression. The dear girl appeared utterly mortified and burst into tears. The spider, played by a ten year old boy who had just spent 3 hours in makeup, deflated like a balloon and he had to be helped off. I was forced to leave via an emergency exit, in order to avoid the ire of the angry parents!”
Holmes’ eyes, until now veiled in the grey patina of stultifying boredom, seemed to light up for a split second like mating fireflies. Removing his filthy pipe, he looked Watson straight in the eye and with a look of feigned surprise, detonated his deadly sarcasm bomb. “No whey!” he intoned with all the sincerity of a snake-oil salesman. Watson, feeling a familiar twinge in his back, slackened his braces and trying desperately to remember the mantra given to him by the fraudulent yogi Vishuddhananda Ranjit Singh, during The Baffling Case of the Indian Rupee Trick, attempted to levitate.

READER’S LETTERS
Dear Sausage Life,
I was listening to Radio 2 the other day whilst cutting up a couple of cow carcases for my husband’s hounds, when I heard Countryside Alliance by The Hunt Cult. How refreshing to hear a record which extolls the healthy outdoor pastime of foxhunting. The Hunt Cult have come up with a jolly catchy ditty which so perfectly encapsulates the joy of getting drunk at 6am, getting on a horse and galloping about killing furry animals. I have only one criticism however:- I may stand accused of being old fashioned and fuddy-duddy, but why does it have to have the word “bloody” in it?
Helena Handcart
Herstmonceaux

Dear Helena,
a version of “Countryside Alliance” can be accessed at the bottom of this page, where you can make your own mind up. Or not.

MATHS DESTRUCTION
Dear Sausage,
I wonder if you could settle an argument. My friend says that in an equilateral triangle, the square on the side of the hypotenuse is equal to the sum of the squares on the other two sides. I say that the angle of incidence is equal to the angle of reflection. Who is right?
Myrtle Beelzebub
Nuneaton
Dear Myrtle,
You are both wrong. The Otto cycle is a two-stroke internal combustion engine with a low cubic capacity, unsuitable for heavy pulling work .It was originally designed for King Otto of Sweden, whose religion forbade him to wipe his own arse.

View all posts by Colin →
This entry was posted on 24 September, 2022 in homepage and tagged Colin Gibson, SAUSAGE LIFE 243. Bookmark the permalink.