Posted on 1 December, 2016 by Ethan Harrison 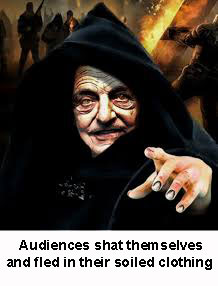 George Lucas has described George Soros ‘Too scary’ to play corrupting Dark Side master Darth Sidious in the new Star Wars movie: Star Wars 18. The comments come after the Hungarian American business magnate took a ‘troubled’ screen test for the role last week and studio bosses reported ‘severe discomfort‘ amongst audiences many of whom literally shat themselves and fled in their soiled clothing upon seeing the international banker’s evil face projected forty foot wide and hissing down on them, “Give in to the Dark Side!”

Mr Soros (86), famous for admitting ‘I have no sense of guilt’ about stealing possessions from fellow Hungarian Jews in 1944 before they were taken away and  liquidated (see article below), viciously seethed, “This Lucas is a fool! I will destroy him like I did the Malaysian and Thai economies in 1998 plunging millions into eternal debt slavery. Heh heh. Oh yes! No one can escape the true dark side: money and the pure greed for power! Heh heh. Oh yes! Heh heh heh heh. The pure greed for power!”

George Lucas explained,”Unfortunately, we felt Mr Soros was not right for the role for a couple of reasons. Firstly, we only needed someone evil enough to seem to want to take over a galaxy far far away not the whole universe. Also, Mr Soros has spent so much time being truly wicked he now looks like a melted candle with a goblin’s face carved into it by a blowtorch. Even with the best makeup department in the world and a graphics computer the size of Belgium, there’s still only so much we can do. Of course, while we want the movie to excite people we don’t want to scare them to death. He’s just too scary.”

The monster businessman (net worth USD $29.3 billion) is thought to have wanted to go into acting for ‘something to do’ after orchestrating fellow failed actor Hillary Clinton’s troubled US presidential bid and was last seen creeping back to his luxury tax-exile cave in Antigua to plan his next attack on the world and feast on the bones of his victims. Leading psychologist Max Prank; PHD, REA, DBE, TWE, ENL, INZ, studying the mass psychological effects of the economy, said, “People have every reason to be scared of individuals such as Mr Soros. If I may make an analogy; the predatory nature of the current international financial system operates much like the 70’s BBC kids’ TV show ‘Jim’ll Fix It‘ in which the Central Bankers, including Mr Soros, play the part of Jimi Savile and the unsuspecting children in the audience represent the countries of the world. In both cases the abusers appear as philanthropists hiding in plain sight in order to disguise their real intentions thus enabling them to safely continue grooming and attacking their targets while the camera crew and production staff represent the world’s media and ‘economic specialists‘ know something is deeply wrong but choose to ignore it under the duress of public and professional alienation. I’ll tell you what though, I would rather have Luke Skywalker shoot his last photon torpedo up my ventilation shaft than see that psychopathic banker come at me as big as a house, wobbling his bony finger about in a dark hood and moaning, “Come with me and feel my real power!”

Interview: George Soros Admits He Has No Sense of Guilt to Profiting …

16 Nov 2016 – He also explained that he had no remorse for what he had done, and that if he had notparticipated, somebody else would have done it anyway …

a http://vidmax.com/ original. ⚫ Tip Jar: via PayPal to: [email protected] If you would like to support this channel, which is …

View all posts by Ethan →
This entry was posted on 1 December, 2016 in homepage and tagged current affairs, Ethan Harrison, politics, satire. Bookmark the permalink.