Reviewing At the Edge of Light the new album by Steve Hackett (Inside Out, 2019) 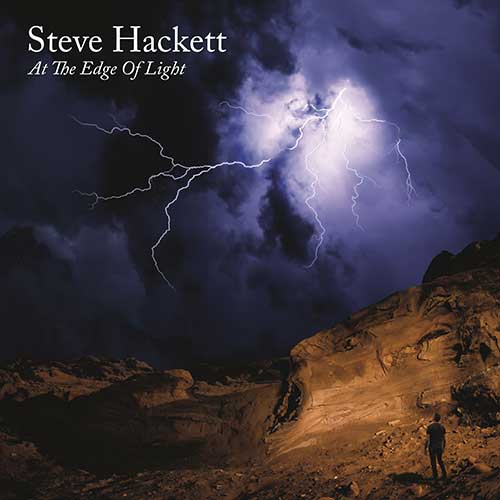 Defiance in D and indeed all the others, the notes dealt, deft and deadly,

And a fearsome overture introduces the orchestra in his fingers,

And those of course in support. Hackett is a musician whose hands

Have never failed those who listen, over fifty years music,

His new songs attain colour, from the boundaries he still searches

Back to the influences jestered in Robert Fripp’s crimson court.

Fallen Walls and Pedestals shake with the forging of a refined heavy metal,

Hackett’s melody masters and goes onto reshape a set form;

With each phrase a new turn, a fresh twist to stringed language,

At the edge of light, is the spectrum from which a new prism or shade

Can be born. Beasts in Our Time seques in with an eerie stumbling pattern,

Its thrust and persuasion speaks of a dark carnival,

The one in which we’re ensnared by those we elect to control us,

Feeding on us, as a past time, while making modern life itself, cannibal.

And yet as in all of his progressions, there is a change to one of the album’s few

Acoustics, an immaculate voicing speaking of ‘poisons in the minds of men,’

Here is warning and call for reason and sense to find focus, as enchanted sounds

Portent and the patterns in death weave again. Rob Townshend’s sax blazes through,

Synths glacier. All weathers at once that fuse to condemn the sad climate

In which the scarred landscape we live on is somehow celebrated

By such a skilled composition and rarefied atmosphere.

With the didgeridoo of Paul Stillwell and Rob Townshend’s Duduk,

Preceeded by stuttering bass and the guitar sheets of Hackett, conjuring strata

With anthemic scope and song hook.  There is a trace of Watcher of the Skies

To this piece as Hackett keeps the land venerated. The speed and force of the music

Needs no atlas as it maps its own bright horizons in vocal glory and near majestic refrain.

Meeting its own form of advance. Hackett and co.’s energy is a true and pure package,

That makes manufactured pop the real desert, around which the laziest feet

Attempt dance. ‘Hot on the trail, the trail of the wind’  a pinball wizard guitar thrall

Skitters across the known air and ear, it is in the magic of change that soon gives way

To the plaintive as those ancient sounds enter, as if ghosts in sunlight were suddenly

Brought to appear. Hackett is restless. He tours across all the world’s stages

And now across ages, often in a moment and in a flutter of sky sent notes and words.

Each musical phrase immediately sisters another, in this and all pieces,

No chance to transform is deferred.  Underground Railroad claws through with Hackett’s

To lead a gospel infused invocation, soothed on a voice bed that the soon warning strings

Crease and shift. Here is Hackett’s song cinema, a casting of the roles

He has acted, across twenty six albums of playing with genre,

And placing song’s cards into twist. He combines an almost frenzied technique

With the heat of invention, his love of the search after so long

Allows his relevance to stay set. As one of the few of his time who seek to exceed

Their first sources, without denying the difference that first brought excitement

Sound could address. These Golden Wings swoops straight in with Orchestral Strings

There as skyscape and the guitar strings fused echo, that holds the magic

Of Hackett’s first solo LP;  Voyage of the Acolyte will remain as one of the finest

First albums and this new song sits central all of his reverberation and work,

Revealing renewed vibrancy. ‘You rejected the notion of a scorecard God,’ is a line

That one expects in a poem, and here it is delivered with beauty, ageless at once

And profound.  The orchestra rivers through as Hackett sails across the turned waters,

In a quest across danger that the very air itself disavows.

From what could be a Soothsayer’s song to a Carl Orff informed choral,

The classic journey’s a painting, depicted in spume and in gale, that the protagonist fights,

Turning every hand to the challenge, all the while elevating a song through the octaves

Onto and into a thoroughly epic scale. Shadows and Flame frames the east,

And exotic airs of the song. Tabla measures each step as the keyboards stab

Through the daylight, rendering the exotic to the listener’s need to belong.

For the song is a world, as is each on this album. Hackett becomes globalist

And travel writer, along with Jo, his wife and his Passapetout, Roger King,

From which Hackett’s Phileas Fogg has made music, and atmosphere echoed

In the invention and joy he now sings. Each finger shift and found song is proof

To all of the power, not only on display here but in music, almost beyond other forms.

You convey more in a note than in a paragraph or a poem, so much more can conjured,

As the heart’s heard expression crests across sound, unadorned.

Hungry Years could be pop, as the east is traded now across water.

The Western ear recognises a disguised lullaby. It seems to cycle around  a Byrds’ like

From explorations of place to enthusiasm forged for the present,

Of the eye. Descent is conveyed by a stutter of drums and chord warning.

A dark shadow forming over once bright land, that stops life.

A singular guitar squeal is paint across a troubling canvas, that has been stretched

Beyond reason, marked and starkly scarred by the brush. Chilling strings taint the air,

String tries to crush.  The instrumental gives way to Conflict, made from a far more

Furious pattern, in which those previously troubled forces have tried to make their assault.

There is the sense of a battle above and perhaps a step or two from Dance on a Volcano,

As if all of Hackett’s instrumentals across his career have been sought.

To reveal a stately piano that has a McCartneyesque feel reveals hope.

There is a trace of Lennon here, too, in the tidy form Hackett masters,

Showing that heroic guitar and songwriting and simple appeal can ring through.

‘Trust in all you know,’ Hackett sings, ‘Love will always show,’ he continues,

And it is as direct as the couplet that completed The Beatles and indeed ‘Abbey Road.’

Hope heard in the heart and now sung through the dark also.

At the Edge of Light, what is left us is all of the chance we are owed.

This most prolific of men has continued to serve his muse grandly.

He tours and shelters the group with whom he found fame and new work.

He works with the most impressive of teams, as his loving wife writes with

And supports him. This new album from Hackett, as in all the work given,

Still stuns and surprises, making him an Emporer of sound

Whose found kingdoms glory each aspect, dressing them grandly

In the very richest of clothes. Hackett is prepared for each change

And chases warmth itself, as you listen. 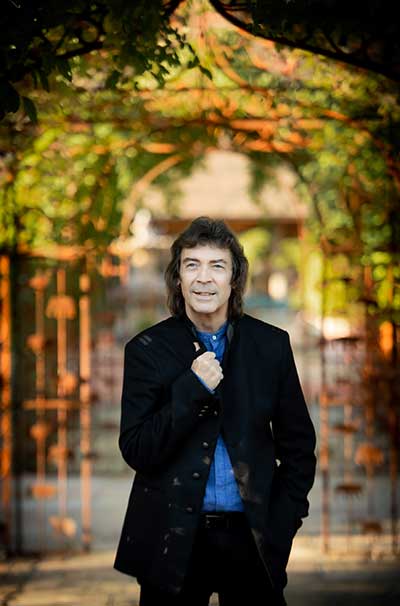 View all posts by David →
This entry was posted on 12 January, 2019 in homepage and tagged At the Edge of Light, David Erdos, Steve Hackett, Tina Korhonen. Bookmark the permalink.