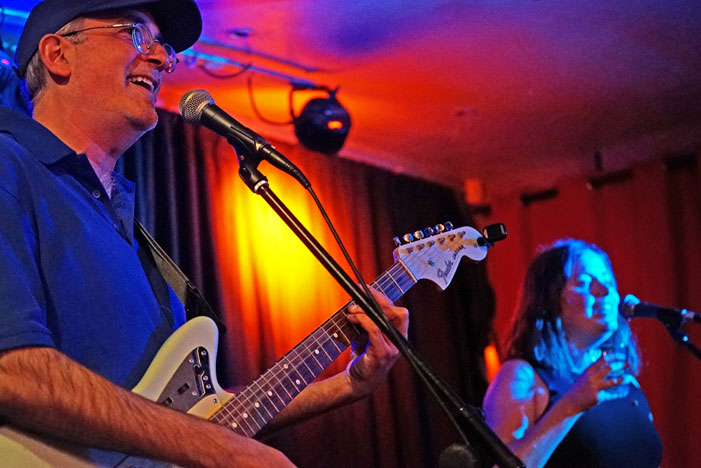 Alan Dearling reflects on the……

Slyly humorous songs. Songs of drink, cigarettes and err, more drink… “I’m going to the bar without you.” 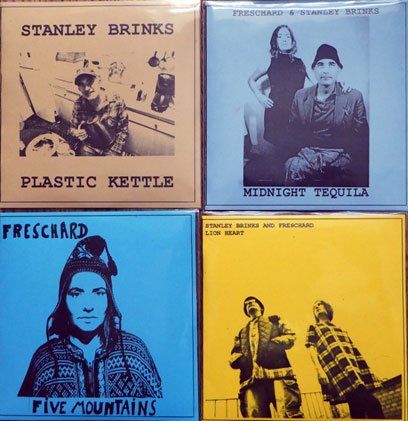 Definitely best considered through a lot of glasses darkly… full-on Anti-folk music, or, something.  Stanley Brinks and Freschard live at the Golden Lion in Todmorden were really good. Memorable, in fact. Quirky, playful, emotional and intimate.

“I AM The Boss,” Clemence (Freschard) told us, and we sang along. Loudly, “You are The Boss!”! These guys are currently based in Berlin. This was the last night of their current UK tour. Lovely. Personal and quirky. And I came away from their gig, humming their tunes, songs full of catch-phrases. And I’ve since been listening a lot to four of their albums. Here’s a wonderfully nutty version of ‘I am The Boss’ while running a bar: https://www.youtube.com/watch?v=-5Lec9pln94 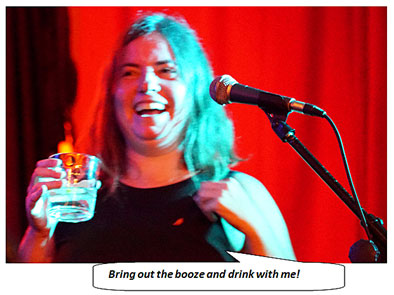 The night I watched them perform they offered a mix of Solo Freschard, then Solo Stanley Brinks, with back up instrumentation from their compatriot. Then, in a final set operating  as a ‘double-act’ showcasing many of their newest songs along with many crowd-pleasing favourites including ‘Orange Juice’, ‘Tweet, Tweet’ and ‘Sober in Barcelona’. So many songs that are total instant ‘Ear-Worms’.  Freschard offers a Gaelic ‘Francais’ that enchants and captivates. Stanley employs the word-craft of Loudon Wainwright, Paul Simon and Jonathan Richman. Both seem to mix in the edgy subterranean beats of the Velvet Underground, and hints of other secret, clandestine entertainments.

Here are some links to their music:

‘Going to the Bar’: https://www.youtube.com/watch?v=r2m_OpxHECw

‘Orange Juice’, Stanley with the Wave Pictures back in 2014: https://www.youtube.com/watch?v=rOIHV8iyzfU

Stanley Brinks is sometimes called the ‘Calypso King’. He appears to have well over 100 albums in his discography. Here’s another one:

Rather than utilising snippets from a range of sources, here are some fascinating insights into their lives and work (so far!) from the rather wonderful, ‘Hug and Pint’:

“STANLEY BRINKS was born in Paris, France, in 1973. He studied a bit of biology, and worked as a nurse for a while. Half Swedish, half Moroccan, strongly inclined to travel the world, he soon started spending most of his life on the road, and developed a strong relationship with the city of New York. He also started playing the soprano sax (among other instruments) in jazz bands. He finally became a full time singer- songwriter – as André Herman Düne – in the late 1990s. He recorded several albums and Peel sessions with his three piece indie-rock band, Herman Düne. After a decade of touring Europe, most of the time in the company of American songwriters, he finally settled in Berlin, Germany. There he developed a taste for the early carnival music of Trinidad, and in the early 21 st century he became the unquestioned master of European calypso, and changed his name to Stanley Brinks. Performing solo with a guitar or a clarinet most of the time, he also toured and recorded a lot with the Wave Pictures, Freschard, Ish Marquez, among others. In 2010, after an all-night jam with local musicians in Egersund, Norway, he started his own band: Stanley Brinks and the Kaniks.” 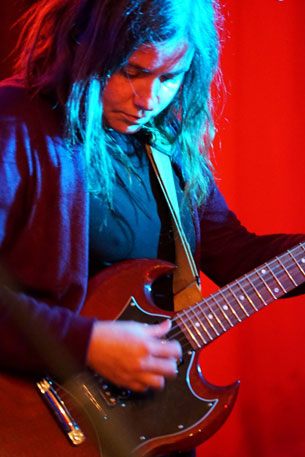 “ In 2016 Stanley Brinks and the Kaniks get together again to record “Turtle Dove”, an ode to peace inspired by ancient poetry, featuring instrumental pieces. During the same recording session, Stan and the Old Time Kaniks – banjo and fiddle – keep the barn rocking all night with new old-timey songs that will be put together on a double LP: “Vieilles Caniques / Nouvelles Caniques”. Back in Berlin the songwriter puts a new kind of strings on his ukulele, learns to play it, and records the quiet “Stanley Brinks Fiddles”. In 2017 he puts out “Apocalypso”, an illustration of the Odyssey accompanied by Greek baglamas and choir. “Midnight Tequila”, a more pop-oriented collaboration album with Freschard, is released in 2018. Then comes “Peanuts”, a collection of indie-pop songs taking place in ancient Egypt and 21st century California, featuring backing vocals by Freschard, Destiny, and Claire Falzon.

Freschard grew up in a farm in French Burgundy. She started organizing shows in the barn when she was about 12 years old. Aged 18 she moved to the big city, Paris, where she baked pies and cakes in a cafe. There, a local musician and regular customer called Andre Herman Düne wrote a few songs for her to sing. She called her first E.P. “Neon Orange”. Homeless in Paris, she saved up just enough money to get herself a ticket to New York. There she found an old electric guitar and started writing her own songs. She recorded her second e.p., “Shower Gel”, with Mike Gomez on lapsteel guitar. In 2004 Freschard moved to Berlin, where she recorded her first LP, “Alien Duck”. Her second album, “Click Click”, recorded in 2006, features a drummer (Leo Bear Creek), and electric guitar by Stanley Brinks. On her third album, “moonstone”, she plays the drums herself. On her fourth “shh…” she also plays the flute. Her fifth album “boom biddy boom” is an urban pop masterpiece. Her latest LP, ‘Sunday Night’ features such hits as ‘friends’ and ‘party’. As a producer she recorded “Yodels” by Stanley Brinks, “if you leave it alone” by the Wave Pictures and many other great sounding albums. Freschard has a Calypso cover band with Stanley Brinks, called Kreuzberg Museum. She’s also part of the cult band “the Fox” with Stanley Brinks, Ariel Sharatt and Mathias Kom (aka “the Burning Hell”). She also has duet albums co written with Stanley Brinks : ‘New Cologne’, ‘Pizza Espresso’ and ‘Midnight Tequila’. Freschard’s shows often feature Stanley Brinks on guitar, the Wave Pictures, the Burning Hell or the Kaniks as a backing band, and she also plays amazing shows on her own.”

And, the following video is apparently his last ever show, 2006, as André Herman Düne. But his personal and band ‘name changes’ and reincarnations are more than a mite confusing. Is he actually David Ivar’s brother? Trust me, I’m a brain surgeon (Editor’s note:  “What”?)

Stanley pointed over to Clemence and told me, “She calls me André, but I am Stanley too. I like to confuse.”

If you get that far, the final, final track, ‘We like you’, is rather a stonking little gem! 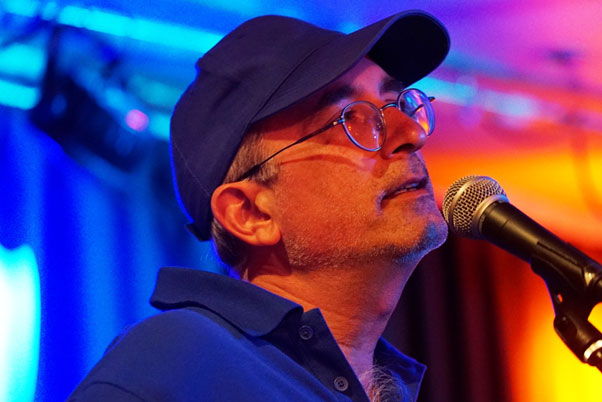 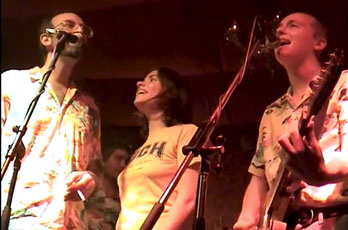 Here’s his ‘Sober in Barcelona’:

Clemence Freschard further enchanted the audience by moving from the stage, dragging Stanley with her, his unamplified electric guitar in his lap, and then sang from the back of the auditorium. Intense, sexy, compelling, electrifying! “Tell me that you love me, and that you like me too.” Tweet
This entry was posted on 28 May, 2022 in homepage and tagged Alan Dearling, Stanley Brinks. Bookmark the permalink.