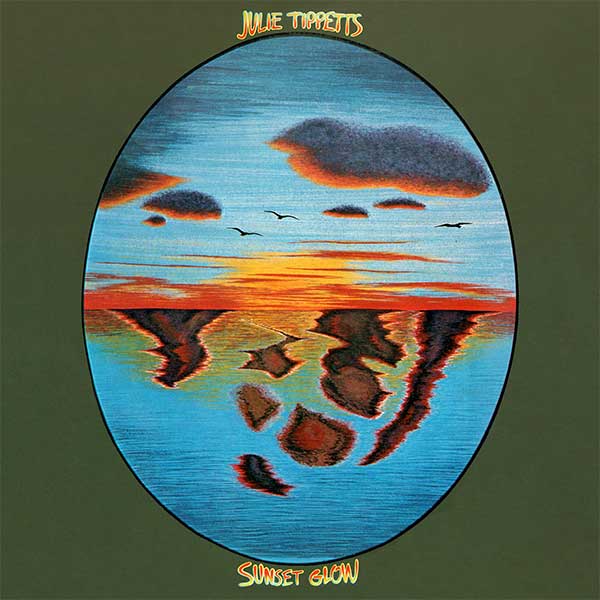 I came to this reissued album at something of a disadvantage, being previously unfamiliar with both the album and artist. The background and experience of the musicians on the album is described in the liner notes by Sid Smith, but other than knowing of Julie’s partner Keith Tippett’s reputation as a jazz musician, I didn’t recognise those names; the closest reference point for me was Robert Wyatt, to whom one track is dedicated ‘for a friend, R’.

As Julie Driscoll (her maiden name), Tippetts had success in the late 60s with Brian Auger & the Trinity, but over a series of subsequent albums and collaborations had moved towards more exploratory forms of songwriting and improvisation, including Sunset Glow in 1975, which has now been newly remastered.

The album feels vibrantly alive with the sound and energy of its performances and its integration of improvisation within its songs, coupled with a sense of recitation, testimony and suspension results in a dynamically confident collection. With vocals, acoustic guitar and piano often foregrounded, and with drums on only one track, there is a generous warmth and intimacy to the proceedings.

The opening track ‘Mind Of A Child’ is a gentle beginning, steadily carried along by cornet, alto saxophone and trombone, alongside Tippetts’ assertive vocals. Following this with ‘Oceans And Sky (And Questions Why?)’ shifts the energy to another level, with a dynamic edge and forward momentum coming in; and as the track unfolds, I realise that while these songs might start on familiar ground, they don’t follow through on any conventional versus/chorus/bridge structures, instead setting a groove or pattern which here develops across troubled and chaotic lines, often containing layers of improvisation.

The 8-minute title track is thread through with a simple piano figure, with layered vocal harmonies from Tippetts, her voice piercing, anxious, confident, comforting and lamenting, and complemented by beautiful cornet and tenor horn from Mark Charig. The song reaches a peak of quiet intensity with the line “I surrender to your overwhelming beauty, unexpected after such a rain-filled day.”

The delightfully bright, and all-too-short, lullaby ‘Now If You Remember’ was written by a friend’s seven-year-old daughter, with Tippetts’ vocal only accompanied by guitars. This leads directly into ‘Lilies’, performed entirely by Julie Tippetts on layered vocals, piano, guitars and clay drum, a strangely possessed song which feels like a poetry recitation.

The instrumental ‘Shifting Still’ foregrounds Keith Tippett’s piano, with a slowly building, improvised intensity. Julie Tippetts’ acoustic guitar keeps pace with this, but it’s the piano which takes over proceedings, shifting into an energy which reminds me of the pointedly pronounced sound of a player piano.

‘What Is Living’ may again layer Julie Tippetts’ vocals, but drives that strategy further: the song’s title is existentially repeated throughout the song, along with other vocals and increasingly wordless sounds. Each time I’ve played it, the track came to its conclusion sooner than I expected, leaving me wanting more.

Concluding the album with ‘Behind The Eyes (For A Friend, R)’, Julie Tippetts delivers an achingly sad vocal with her own piano playing. A poignant piano figure reminding me of Erik Satie, steadily carries the song along, and the vocals navigate a range of emotions and feelings, some heartbreakingly so: ‘we care for you, we care for you’. The liner notes quote Julie Tippetts: ‘I never mentioned the identity of the friend “R” who was mentioned in the dedication at the time because I didn’t want to embarrass him, but that was written for Robert Wyatt after he had his dreadful accident in 1973’; Sid Smith then adds, ‘Robert Wyatt is on record as saying that he regards Sunset Glow as a companion piece to his own album, Rock Bottom.’

This is a powerfully emotional and personal album, ­centred around progressive and exploratory performances. If this is an album you’re unfamiliar with, I highly recommend it.