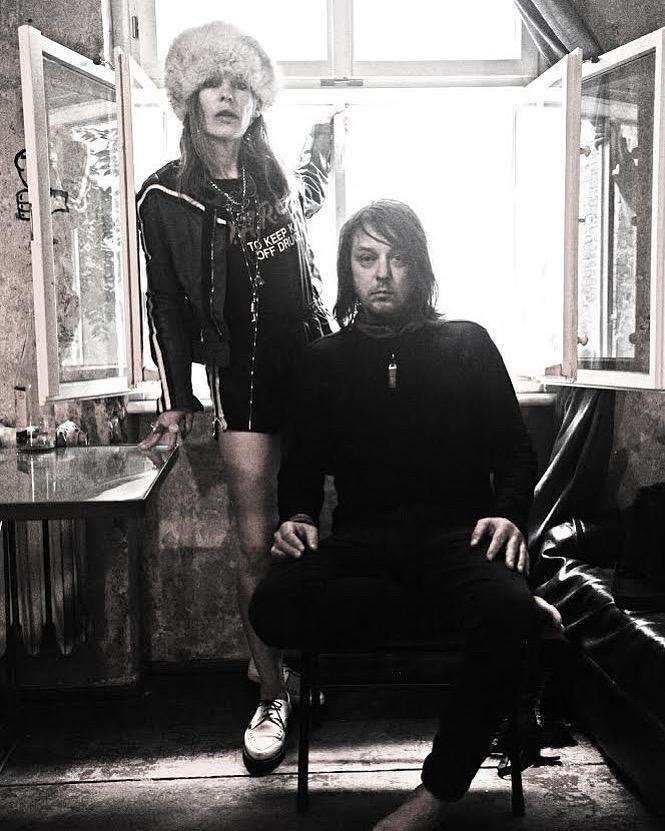 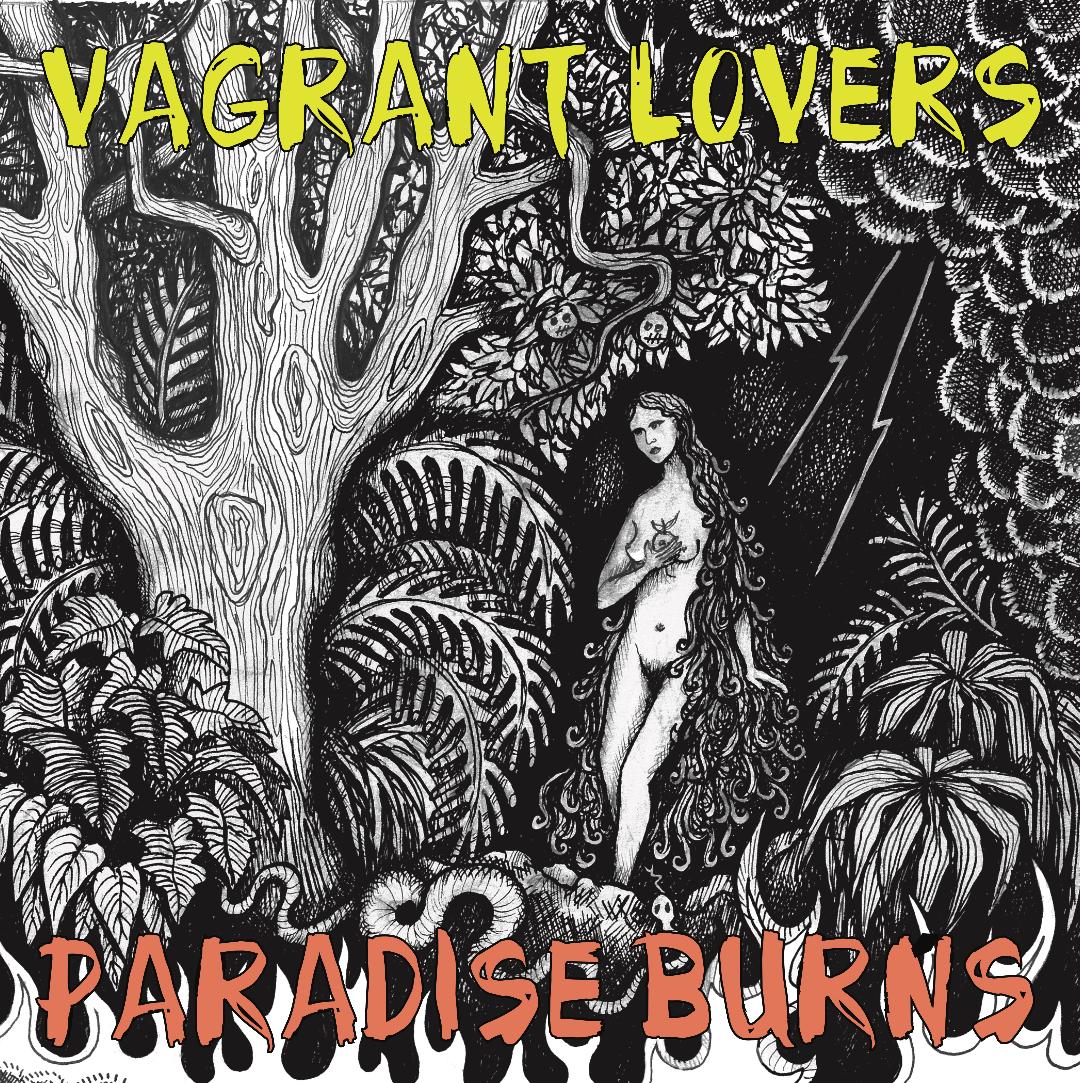 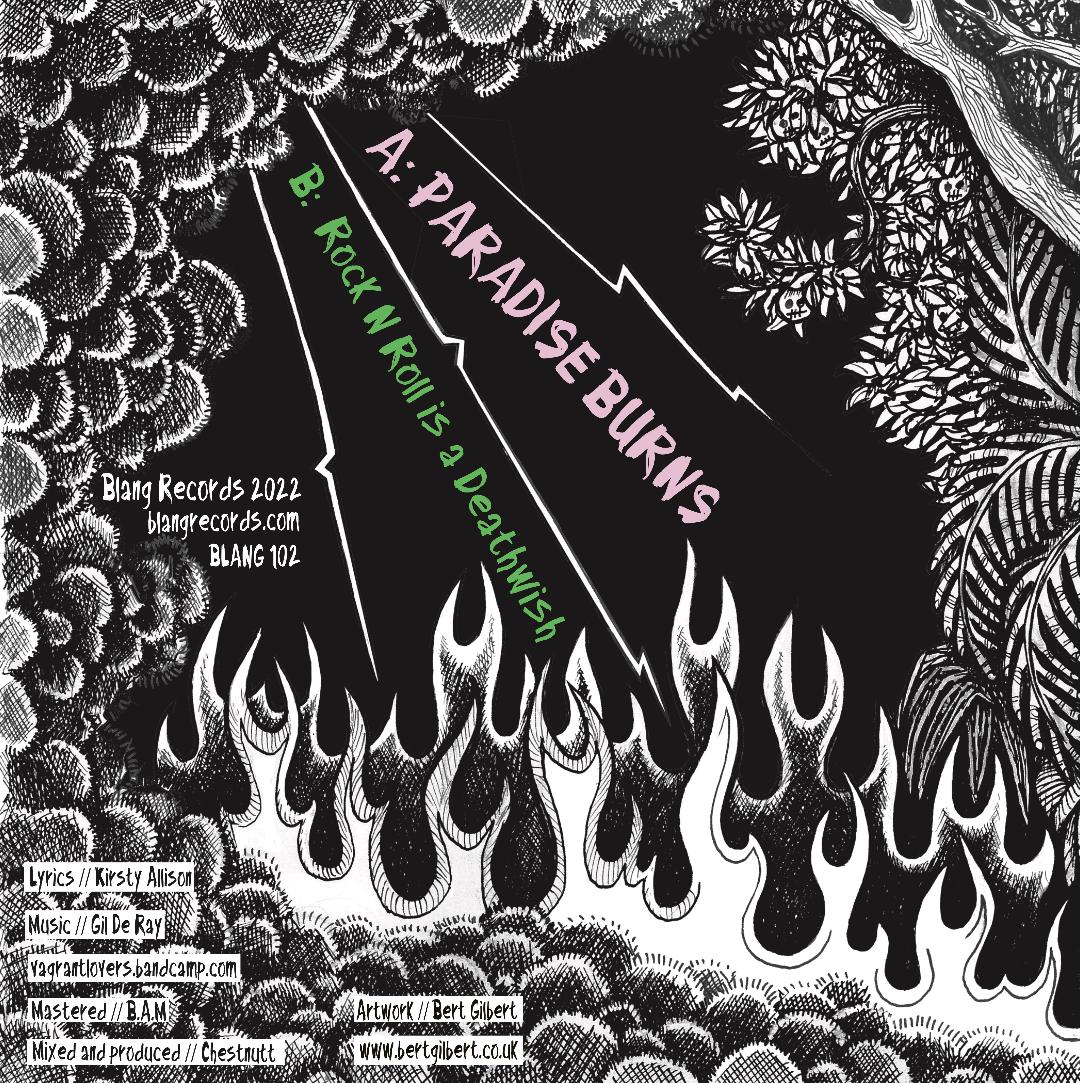 The  Vagrant Lovers’debut single is dropped like the fruit
Of temptation; a bitter bite that spits image as well as the pips
From dark love as the ‘stage is pre–lit’ and the ‘apple split,’
There’s damnation raining down on those searching

For some kind of sign from above. As Paradise Burns,
the drum box trips and slips across Spark charged rhythms,
As Gil De Ray’s dark synth sirens and ominous bass set the scene
For Kirsty Allison’s vox, one part Wendy James, one part Siouxie,

As she sneers and seduces, singing and singeing on the burning
Down of hope’s dream. This track charts the course from Brecht
And Weill, through to Nico; it has the crunch and grunge
Of the Velvets and the sheen and shimmer of its own

Underground groove. It is warning and wind, blowing in
From Hell’s corner, as leather clad angels give up the ghost
To improve their last chance and yours. ‘Experience is pain,’
Kirsty tells us. The points of ascension and fields of descent

Are our own. And while ‘The Garden of Gethsemane
Ain’t new to me’ She speaks for us, as we inevitably chorus
How hot it can be when alone we watch the world burn
As it has been for years now.  Poem as prophecy. Sound

As suture for a future to find in the ash. Which this startling
New  single brings; Blang as provider, produced by Snapped
Ankles and Floating World Pictures’ Chestnutt, like a
Hieronymous Bosch lightning flash. This song is the darkness

During the storm which does not quell the fire. Instead,
It is upto the Vagrants to revivify and tame flame.
Listen, dance, see, as they excoriate Paradise whilst in
Peckham, and then chase horizons, as if scorching all skies

For song fame. Rock N’ Roll is a Deathwish follows on,
With its 70s stomp-like Rhythm. Allison intones on the connection
Between early death for those marked by the need to embark
On the same fate smeared journey in which Hendrix, Joplin,

Morrison, Cobain, Winehouse and co met the dark.
Voice flanged, megaphoned, the sonic assault is pure warning;
Harsh preaching mutating into comfort and care under noise
As the story is told in a collage of reverant reference;

A word storm that’s whipped by Gil De Ray’s bass testing
Treble which plugs directly into the spirit of all of those doomed
Girls and Boys. From Richie Valens to Malcolm Mclaren,
The song says that the desire to dream it, is what in the end

Sours night. As Kirsty cavorts her screed becomes post-punk
Dylan: a Subterranean Homesick Blues, with blood
For these vagrants whose own love is themed through
The fright. You can see these dark angels in light and a film

Of the mind at all moments, as well as at Rough Trade
East on Wednesday, September 21. 2022 is the year
In which the changes are charted. The death of the Queen.
No more Unpriti Patel. No more Johnson. Even as

The tumescence from yet more pricks and cunts has begun.
The Vagrant Lovers both come with a test, and through
A tempest of temptation to make this dark totem,
Burning bright through ripped cloud. In both digital form

As well as a Vinyl, to shake and to show you
How the heads who sing proudly for the sake of us all
Are not bowed. John Gosling and Isabelle de Jour’s mix
Restoratively rams the point home, with a world music

View all posts by David →
This entry was posted on 17 September, 2022 in homepage and tagged David Erdos. Bookmark the permalink.