The Disreputable History of Gerrard Street. 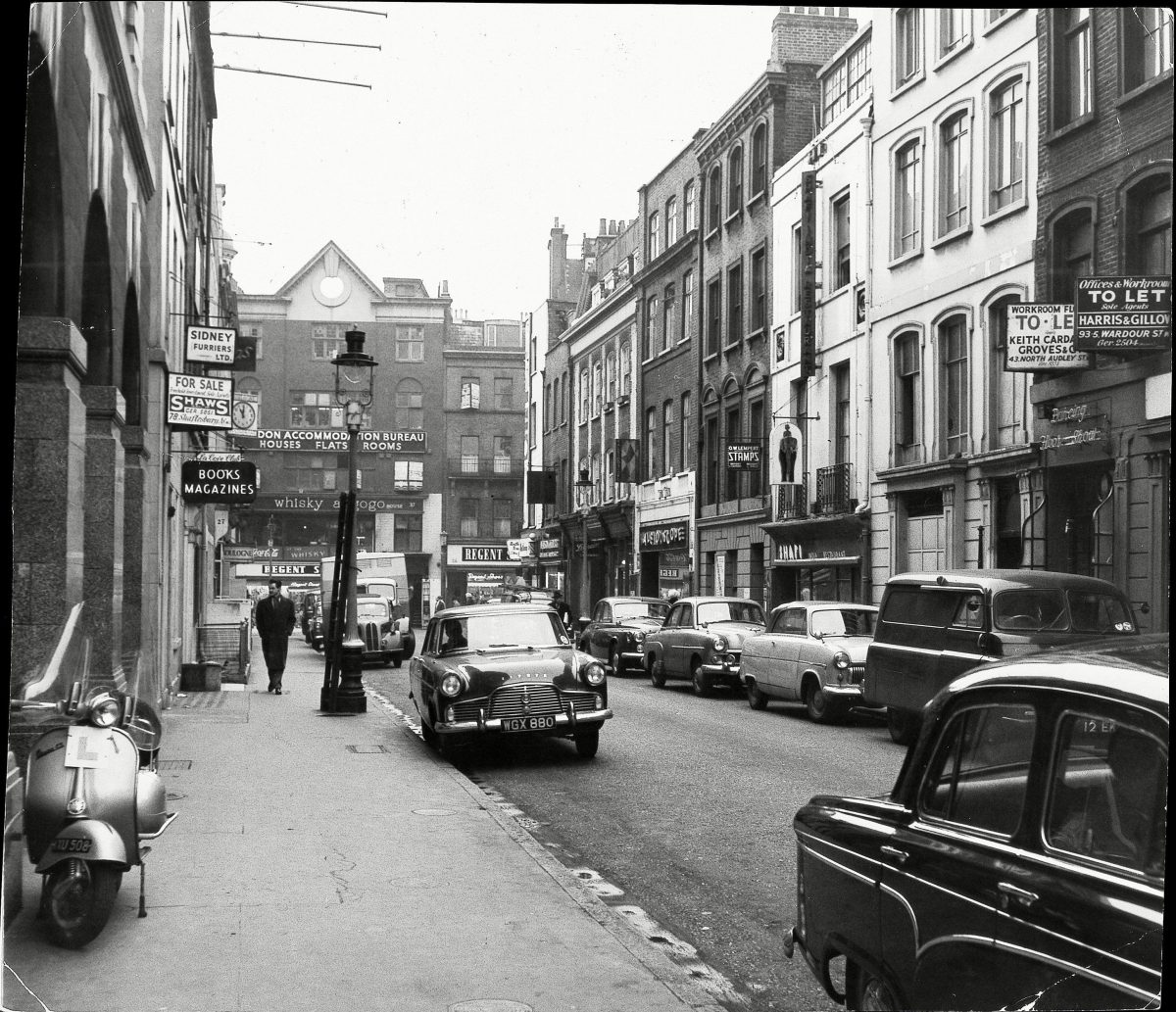 At the end of October 1959 in the basement of 39 Gerrard Street, in an unexceptional and damp space that was once a sort of rest room for taxi drivers and an occasional tea bar, Ronnie Scott opened his first self-titled jazz club. Along with Ronnie himself and his business partner and fellow tenor saxophonist Pete King, the Tubby Hayes Quartet played on the opening night.

Back then, the now vibrant main thoroughfare of London’s Chinatown – popular with tourists and Londoners alike – consisted of mostly brothels, disreputable nightclubs and seedy shops selling books and magazines of dubious quality. The restaurants were shabby and had seen far better days but there were two of note, the Boulogne Restaurant at number 27 near the corner with Wardour Street and Peter Mario’s at 46. The latter sold Italian food adapted for the British palate and the gangster Billy Hill ate there so often it was practically his office. The boxer Henry Cooper was also a frequent visitor and married one of its waitresses in 1960.

Across the street from Peter Mario’s, George Harrison Marks and his partner Pamela Green lived and worked at number 4. Marks provided nude photographs for magazines while Green had been nude-modelling since 1948, initially to pay her way through Art School. The couple launched Kamera magazine in 1957 the success of which enabled them to buy number 5 Gerrard Street where they built a larger studio. Marks was said to be the first person to use the word “glamour” as a euphemism for nude modelling and photography. 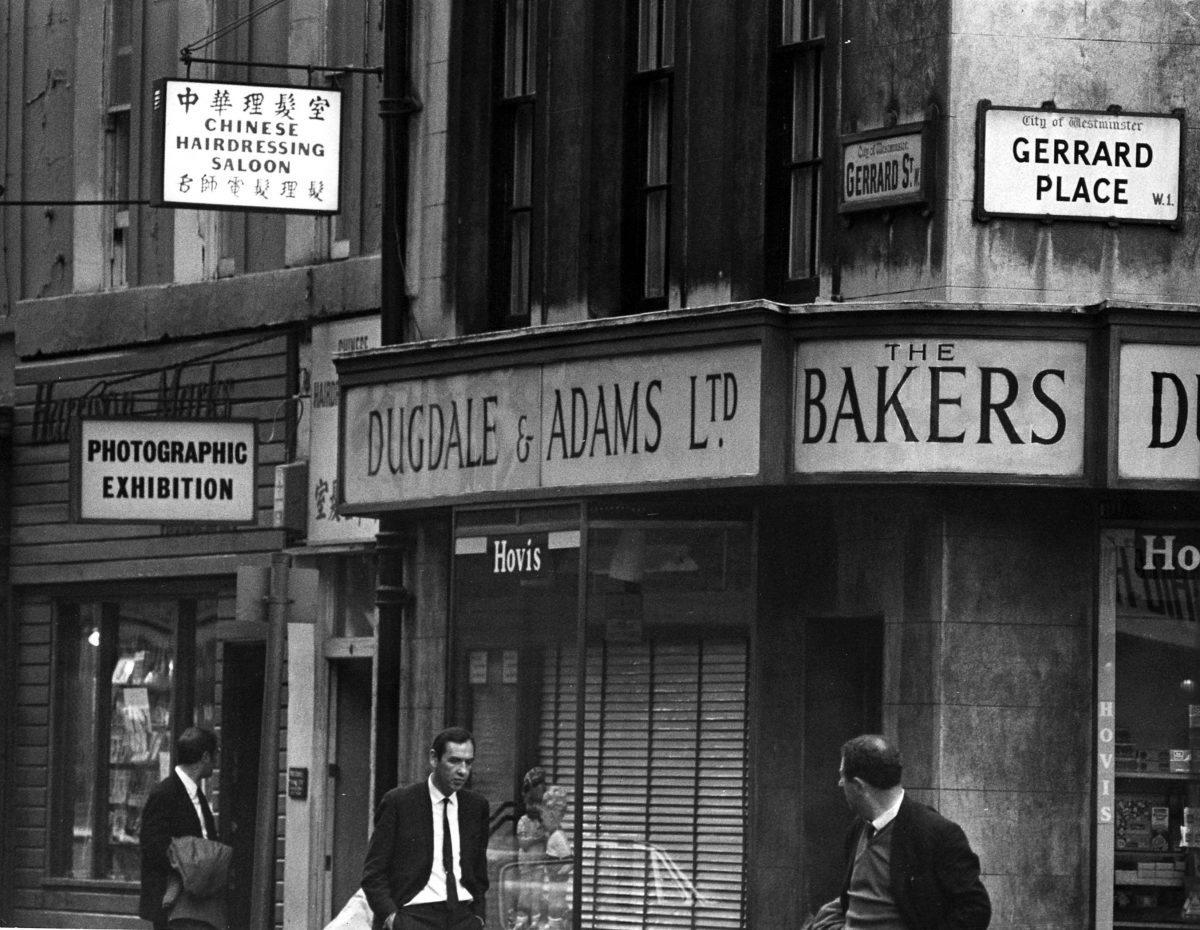 Photo by BRIAN MOODY / Rex Features
The Corner of Gerrard Street and Gerrard Place in Chinatown, the Harrison Marks Studio can be seen on the left. 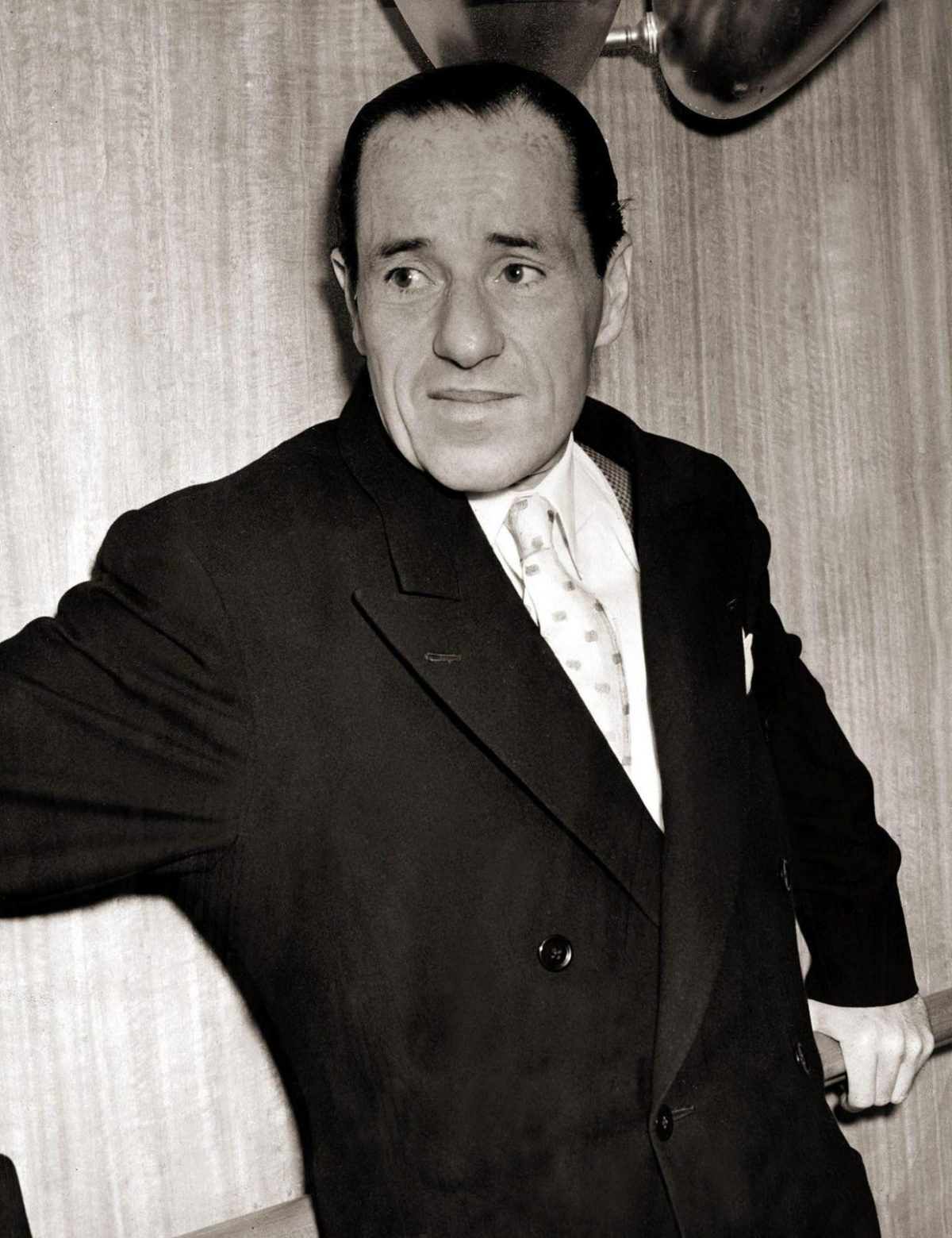 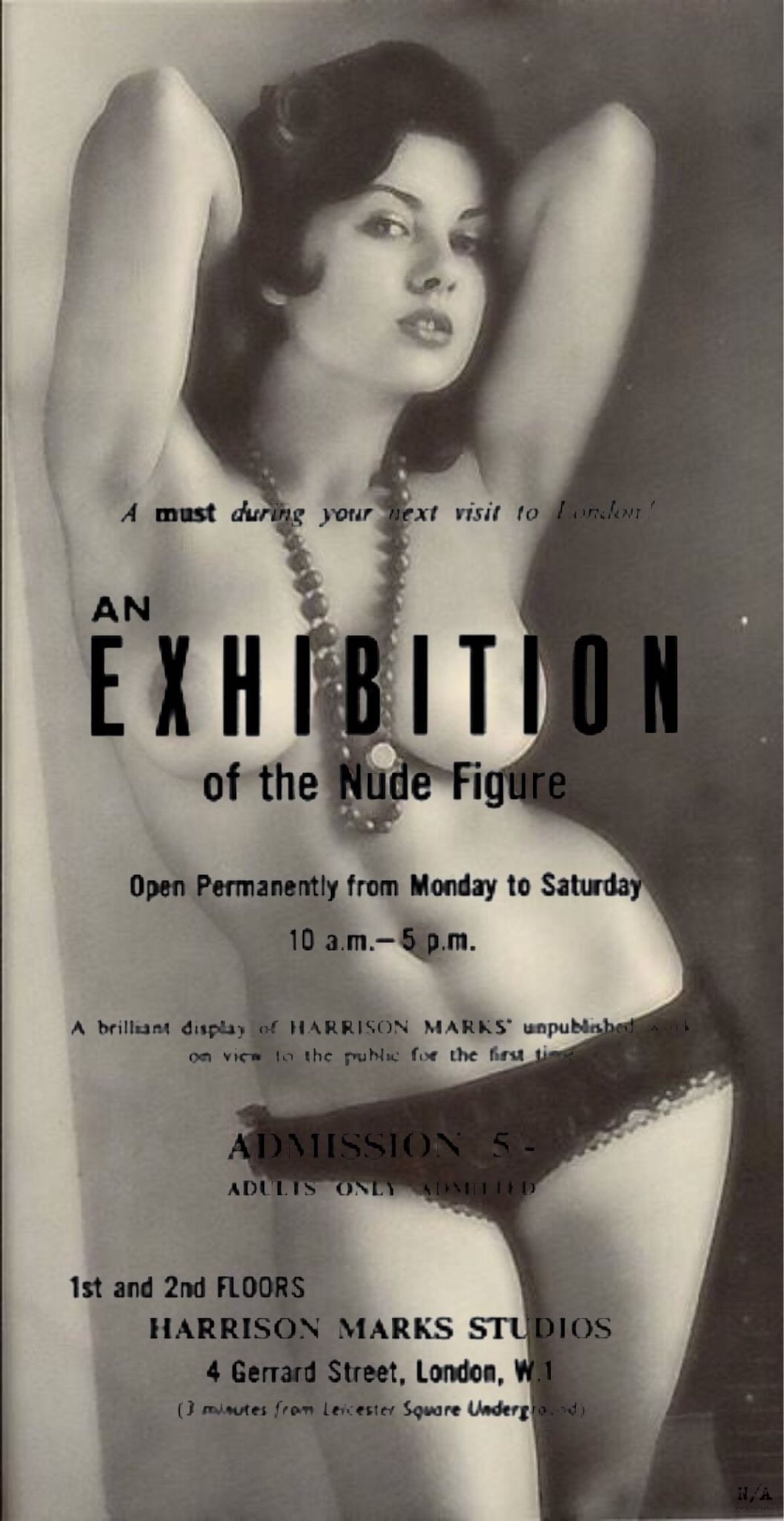 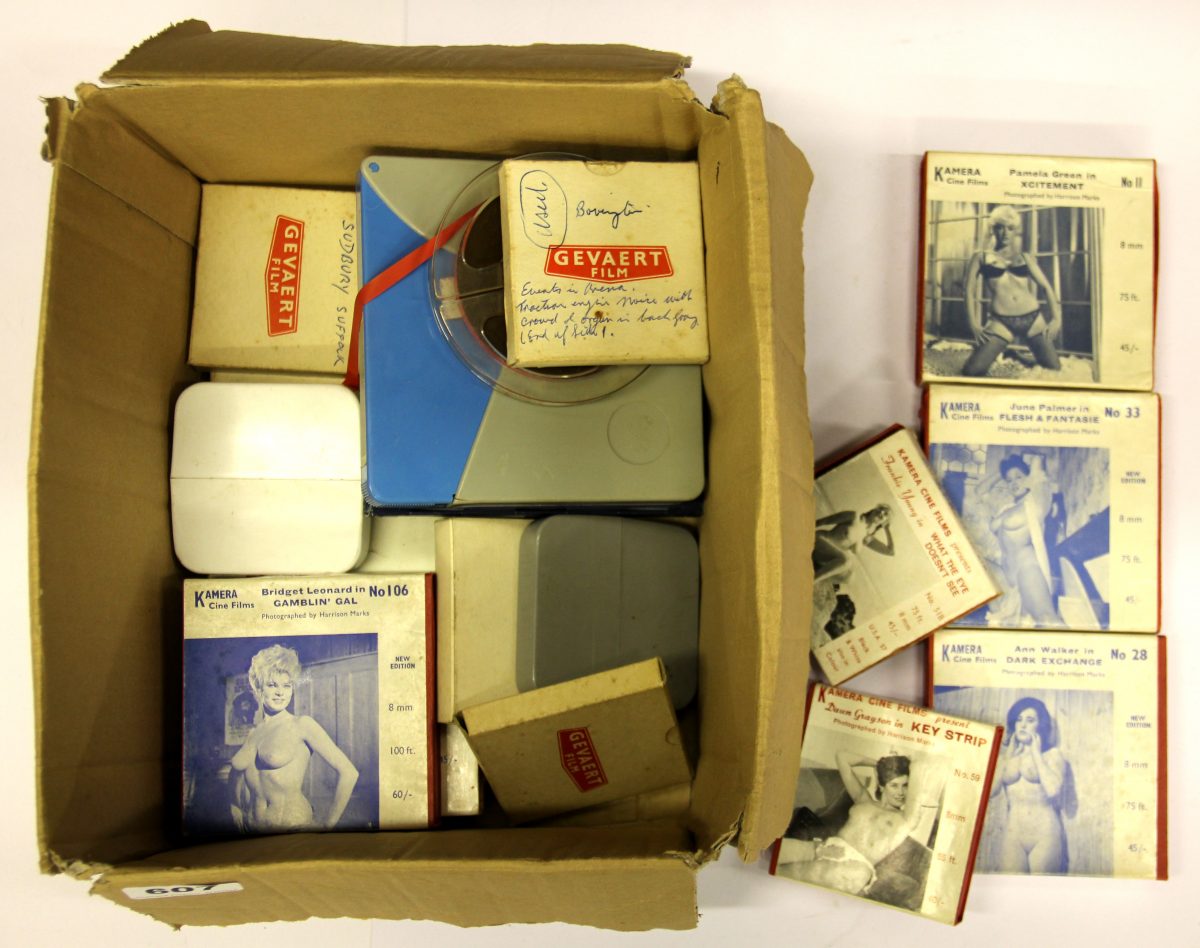 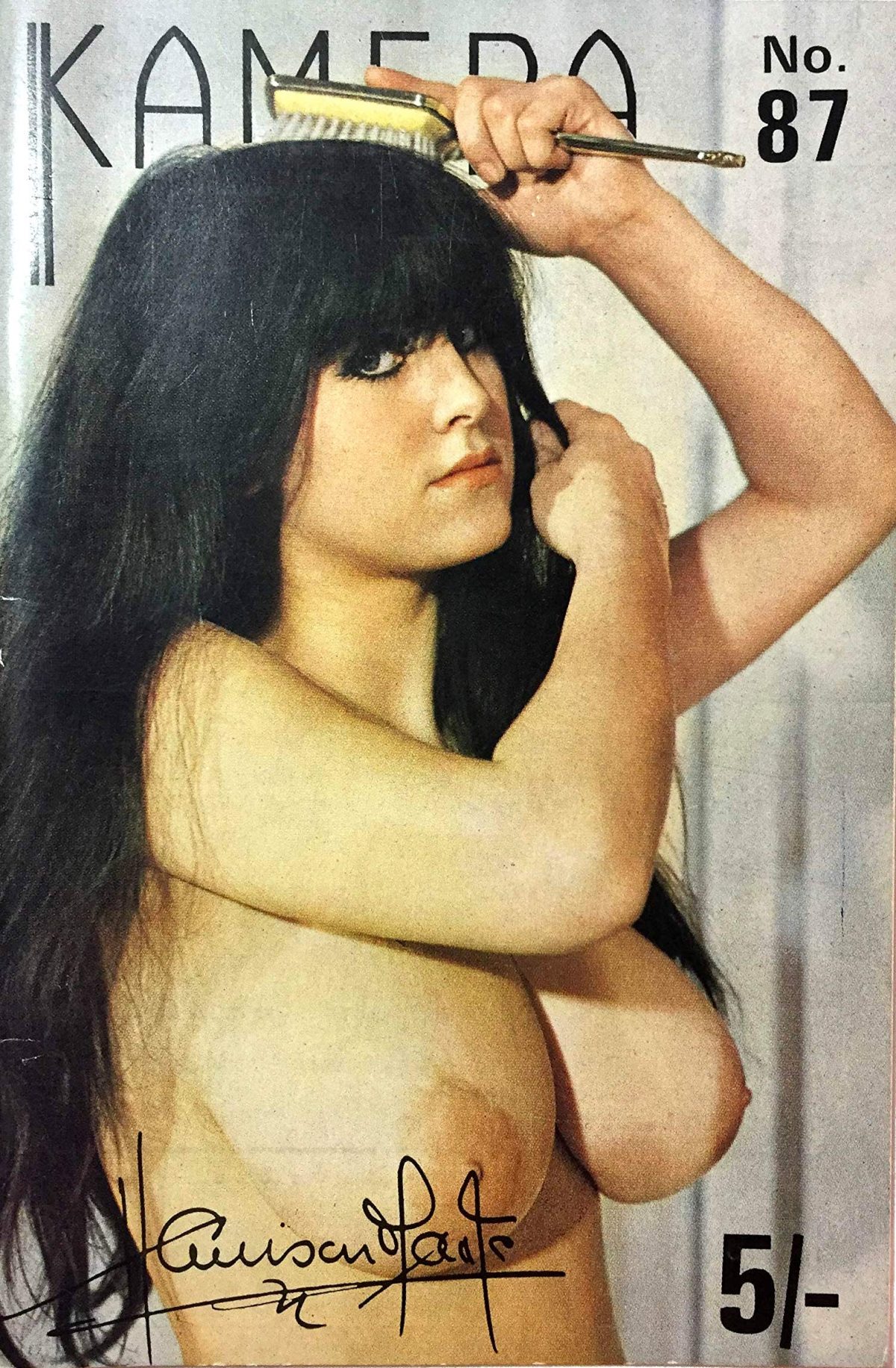 Towards Wardour Street from Peter Mario’s, and on the same side, was the headquarters of Tailor and Cutter. The magazine, established in 1866, moved to 42-43 Gerrard Street in 1902 the same year that Beatrix Potter privately published what was to become her favourite book – the Tailor of Gloucester. Potter’s cover featured a mouse reading a copy of Tailor and Cutter magazine. Exactly twenty years later in 1922, underneath the magazine’s headquarters, London’s infamous “Nightclub Queen” Kate Meyrick opened her first club:

I shall never forget my first sight of the cellars of 43 Gerrard Street..My mind travelled into the future…I saw no longer the mildewed walls of a dingy cellar, but the bright interior of the most famous night resort the world has seen in any land or age. I beheld royalties, peers, millionaires and celebrities…gathered together in a glittering throng.

Club “43”, depicted as the Old Hundreth by Evelyn Waugh in A Handful of Dust, was soon attracting exactly the sort of clientele she envisaged. Although Mrs Meyrick’s disregard for the relatively new licensing laws brought in during the First World War meant that she soon got into trouble with the authorities. In November 1924, after several police raids, Meyrick, despite her determination not to submit to the ‘kill-joys’, was sentenced to six months for selling alcohol without a licence. Club “43” was also notorious for the cocaine dealing that took place on the premises (the advantage for dealers, during the many police raids on the club, was a hidden escape route to nearby Newport Place). Tallulah Bankhead, never one to hide her penchant for the drug once described the club as “useful for early breakfasts” and when asked what time this was, she replied “about 10pm”. 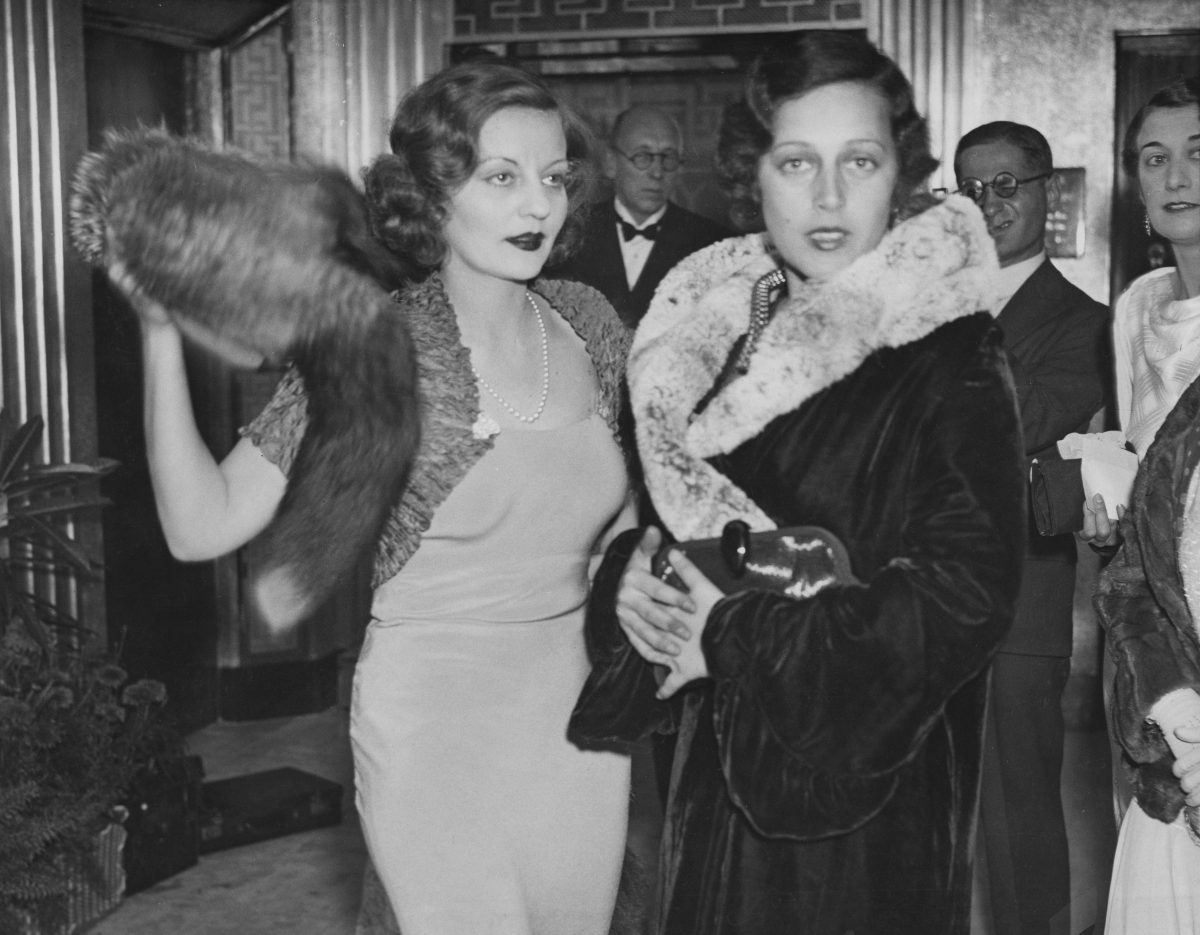 Tallulah Bankhead and her lover Toto Koopman at a screening of  ‘The Private Life of Don Juan’ at the New London Pavilion, 6th September 1934. 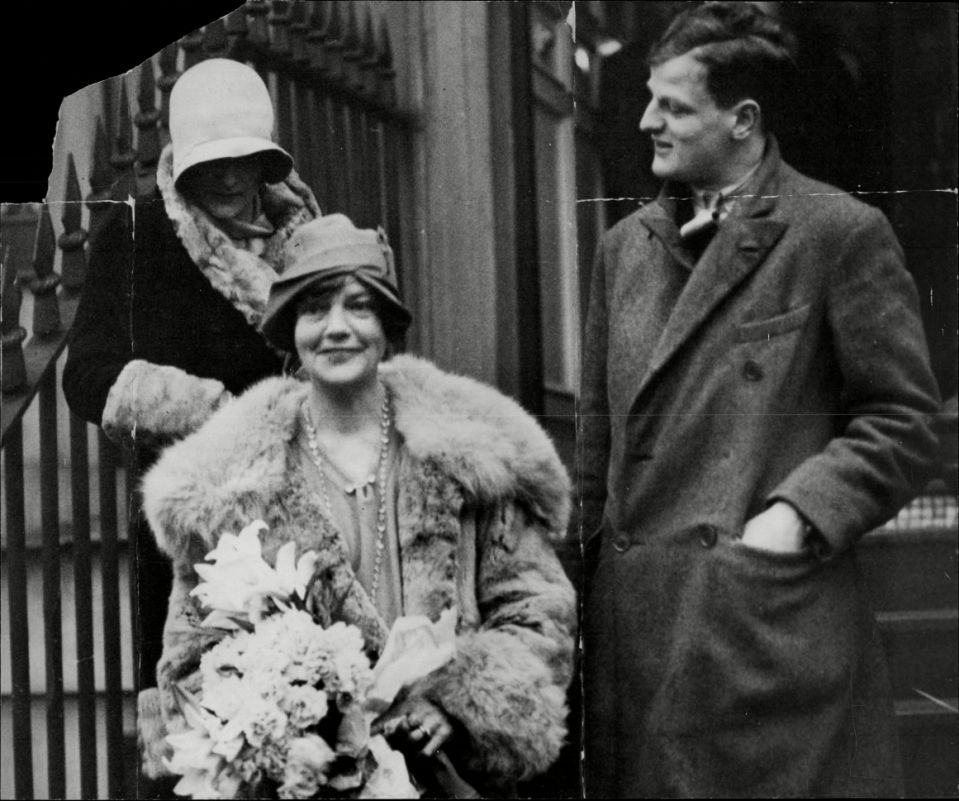 Kate Meyrick with One Of Her Daughters And Her Son – She Became A London Club Hostess And Proprietor Of The Notorious ’43 Club’ At 43 Gerrard Street Soho London (an Address Also Once The Home Of Poet John Dryden). Mrs Meyrick’s ‘contempt for the law’ meant several spells in Holloway prison mainly due to repeated licensing law transgressions but also the bribing of policemen. The latter of which meant that the prison sentence included hard labour. The many visits to Holloway weakened her health and at the age of 57 she died in 1933 – dance bands in the West End, apparently, fell silent for two minutes in tribute.

About twenty years after the death of Mrs Meyrick, George Melly and the trumpeter Mick Mulligan started the West End Jazz club in the basement next door at number 44. It was here that ’beatniks, Soho layabouts and art school students’ took part in the first ‘all night raves’. According to Melly the word ‘rave’ as in to ‘live it up’ was invented by Mulligan and Melody Maker at one point called Mick Mulligan the ‘King of The Ravers’. The drug of choice that allowed George and his friends to last the course was amphetamine extracted from broken up inhalers. Smith, Kline and French’s Benzedrine Inhalers were intended as a decongestant but it was possible to break them open, remove the paper strip or cotton wool inside and soak them in a cup of coffee or tea. This was called a ‘B-Bomb’ and the preparation got so popular the manufacturers had to withdraw the inhaler from over-the-counter use in the mid-fifties. 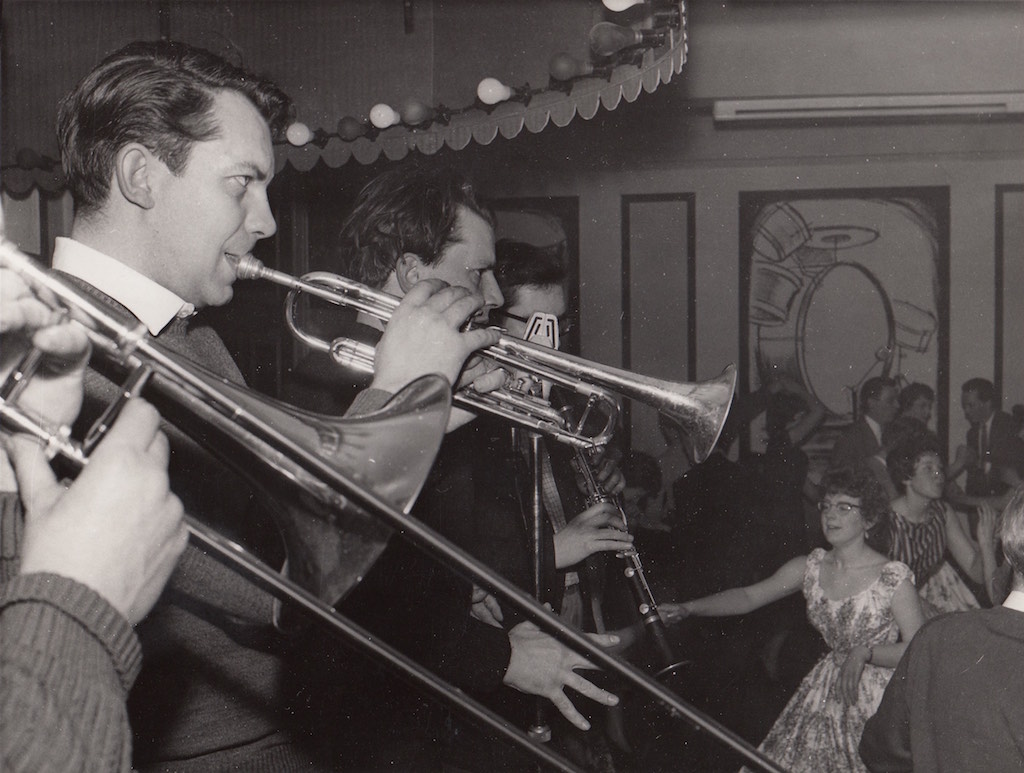 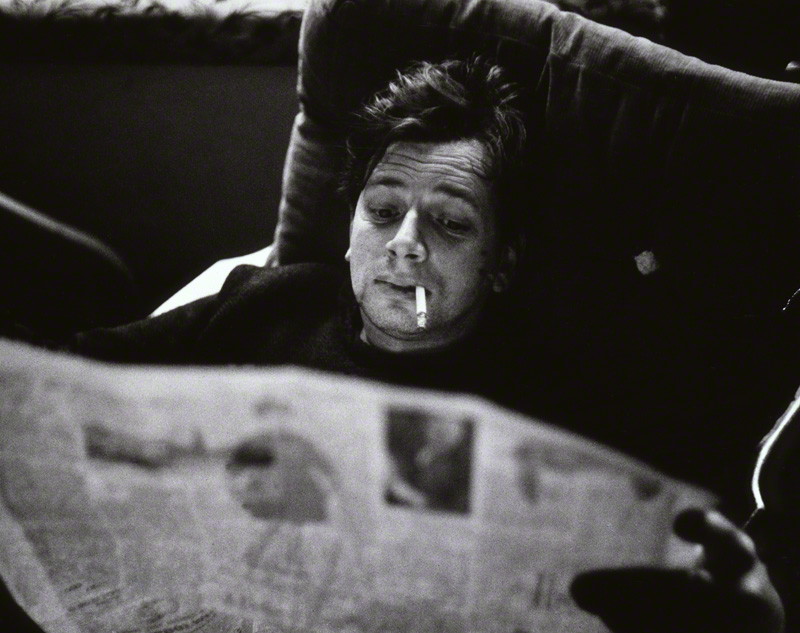 Due, perhaps, to the lack of suitable inhalers the venue became far less frenetic when a folk club called The Good Earth opened in 1955. It soon became the 44 Skiffle Club after the success of Lonnie Donnegan’s Rock Island Line. Run by John Hasted – one of the earliest champions of skiffle which he saw as a form of teenage urban folk music, the house band was known as John Hasted’s Skiffle and Folksong Group and featured the young folk singer Shirley Collins. Many are amused that these trendy clubs were based around, in George Melly’s case trad jazz, and with Hasted, skiffle and folk music, but these were the first youth movements based around music in the country. In London it wasn’t rock and roll that was the soundtrack for the first so-called ‘teen-agers’.

In 1967, after becoming a bit of a dingy old strip-joint, 44 Gerrard Street became known as ‘Happening 44’ – a trendy psychedelic club run by Jack Braceland, a middle-aged, slightly weird beatnik character but one of the earliest light-show artists in the UK. His light shows, featured in the early gigs of Pink Floyd amongst others, used hand-assembled wet slides and Aldis projectors. His company called Five Acre Lights was actually named after a nudist colony he helped run with his wife at Five Acre Woods near Watford – Pink Floyd once played a gig there on Guy Fawkes Night in 1966. If it’s your bag the Naturist Five Acres Country Club still exists. For the few months it was around ‘Happening 44’ featured such bands as the Social Deviants and Soft Machine but also some of the earliest gigs of Fairport Convention. 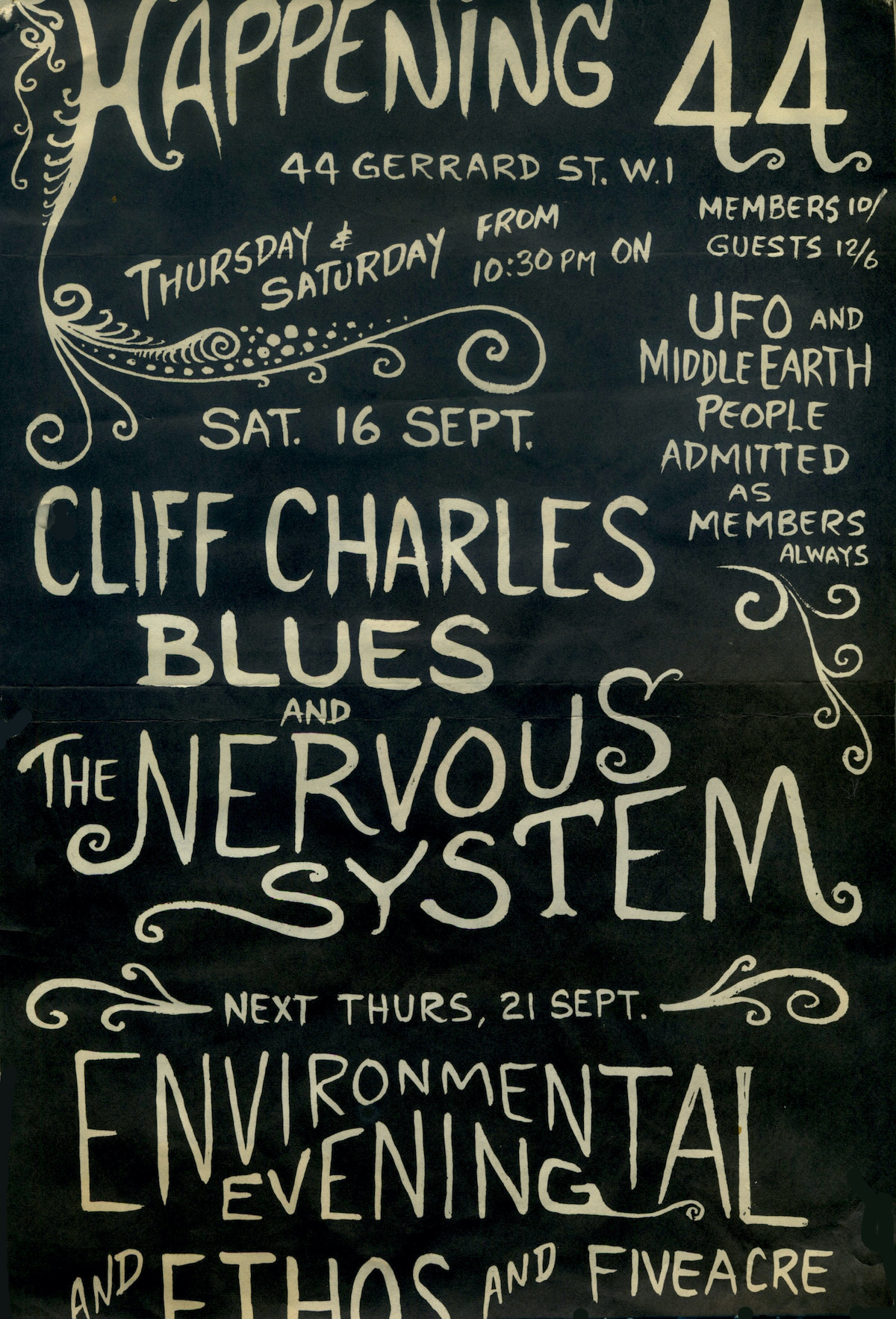 In December 1964, on the other side of Gerrard Street, Hew McCowan opened the Hide-a-way Club at number 16. McCowan made a rather idiotic mistake when he offered the Kray Twins a stake in the club before reneging in public a few days later. The Krays who were looking to widen their empire into the West-End started to threaten McCowan who indirectly let the police know what was happening. In 1965 a charge of demanding money with menaces led to the twins being remanded at HMP Brixton for a trial. After extensive ’nobbling’ the jury was unable to come to a verdict and a subsequent retrial was abandoned. The Krays celebrated their freedom by holding a huge party at the club which had now been sold to them by McCowan’s landlord and which they renamed El Morocco. The partygoers at El Morocco would have noticed that there were already a few Chinese restaurants on the street but additionally, almost opposite the club, the Loon Fung supermarket had just opened in the old Tailor and Cutter building. It was the beginning of the new Chinatown. 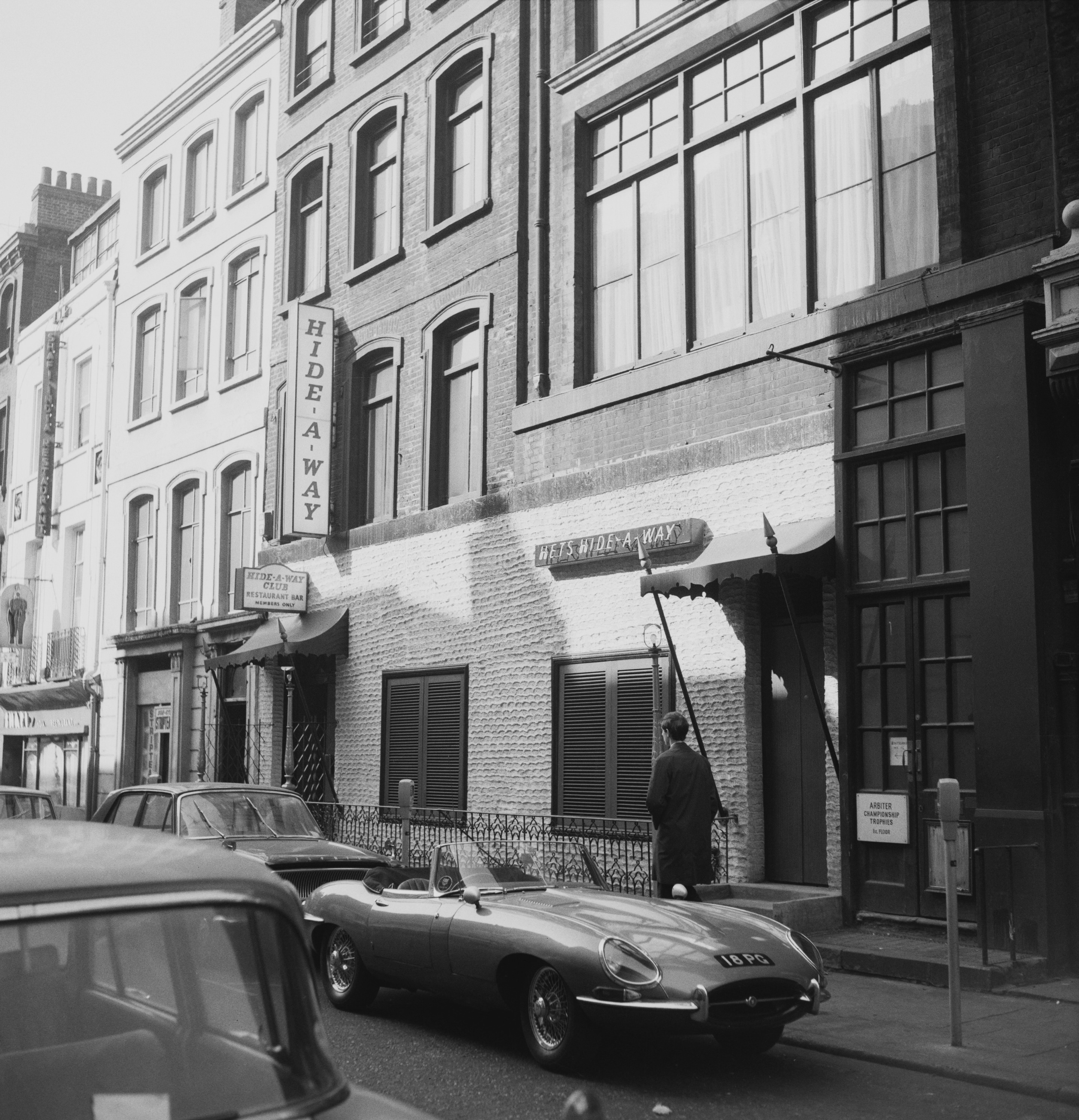 The Hideaway Club on Gerrard Street 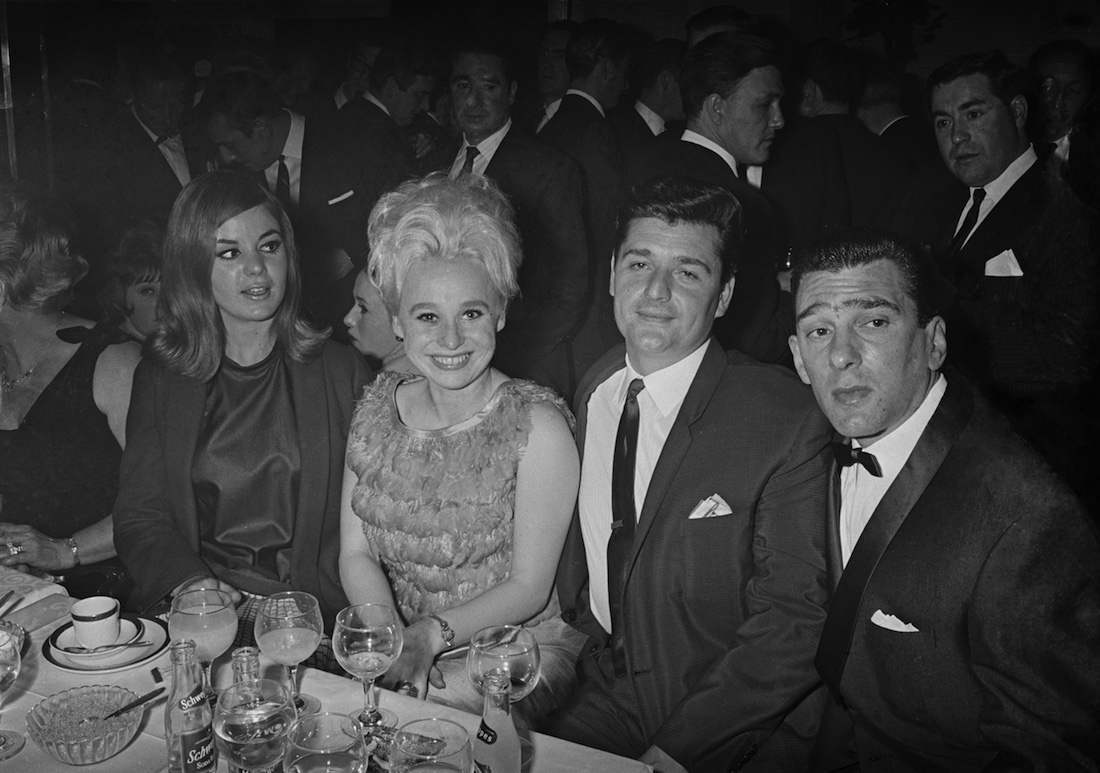 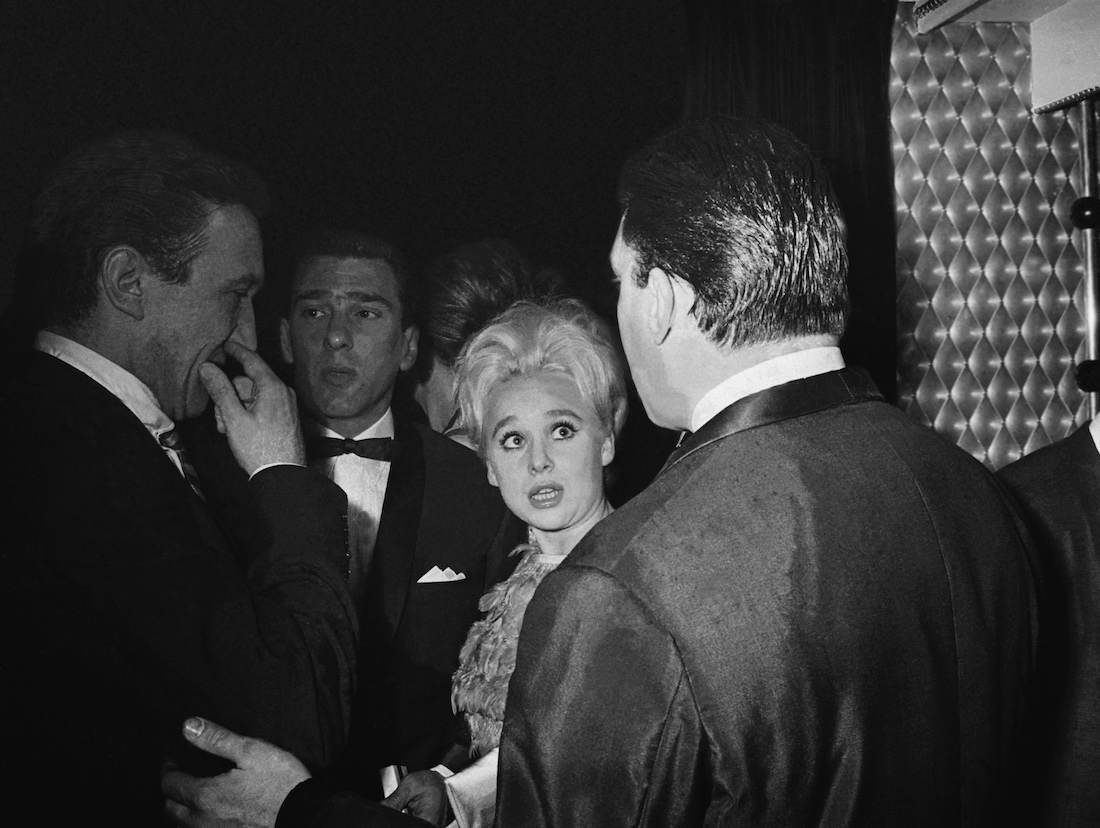 London’s original Chinatown, consisting mostly of Chinese sailors and their wives, was initially based in Limehouse. In the 1930s, probably encouraged by the atmosphere of the ‘yellow peril’ hysteria whipped up by the popular press and only inflamed by Sax Rohmer’s Fu Manchu books and films, the local council decided to clear the ‘slum area’ around Limehouse. Most of the Chinese shops, restaurants and gambling dens were swept away. The destruction of the area, exacerbated by the Luftwaffe bombing during World War Two, meant that much of the old Chinese community de-camped to the West End attracted by the cheap short-term rents of the time. Mandarin Street near Westferry DLR station and Ming Street just off Poplar High Street are remnants of the original Chinatown in the East-End. 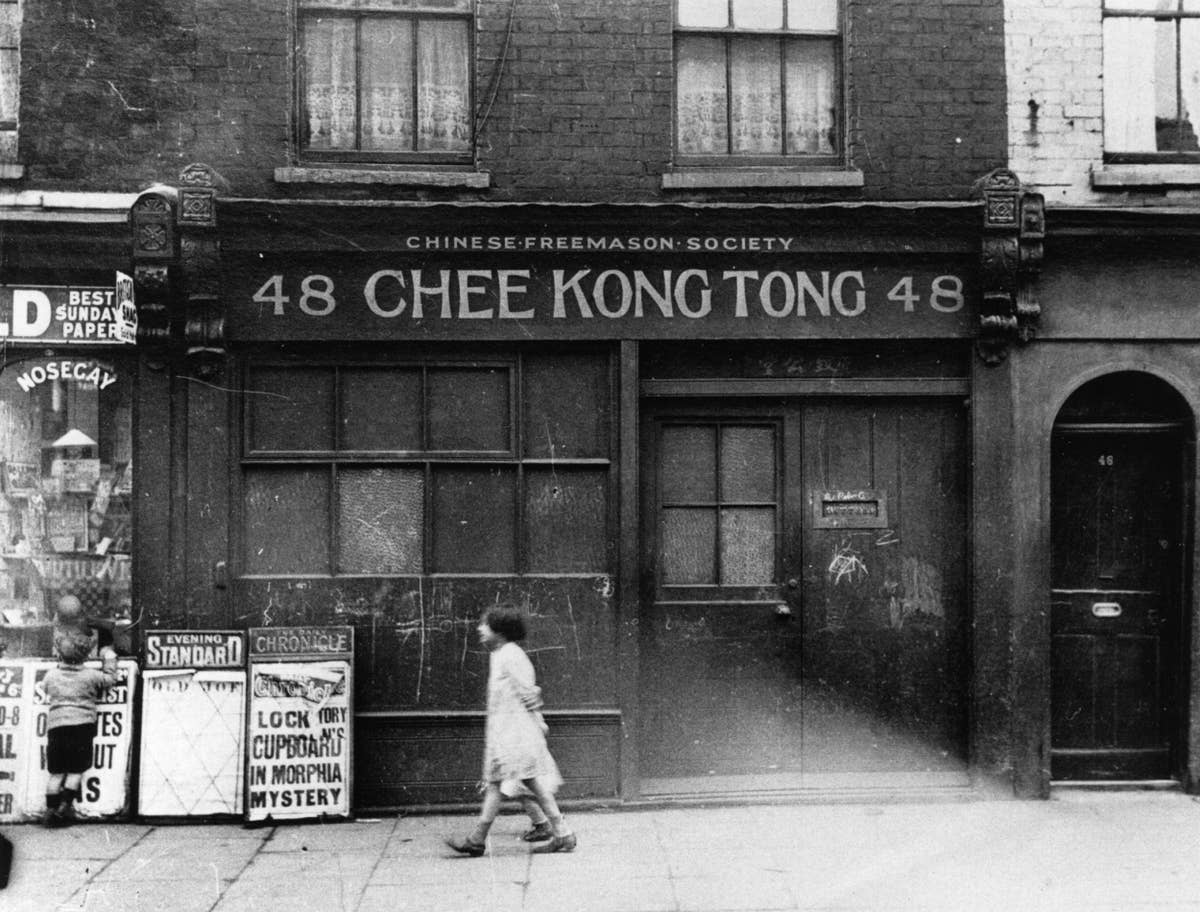 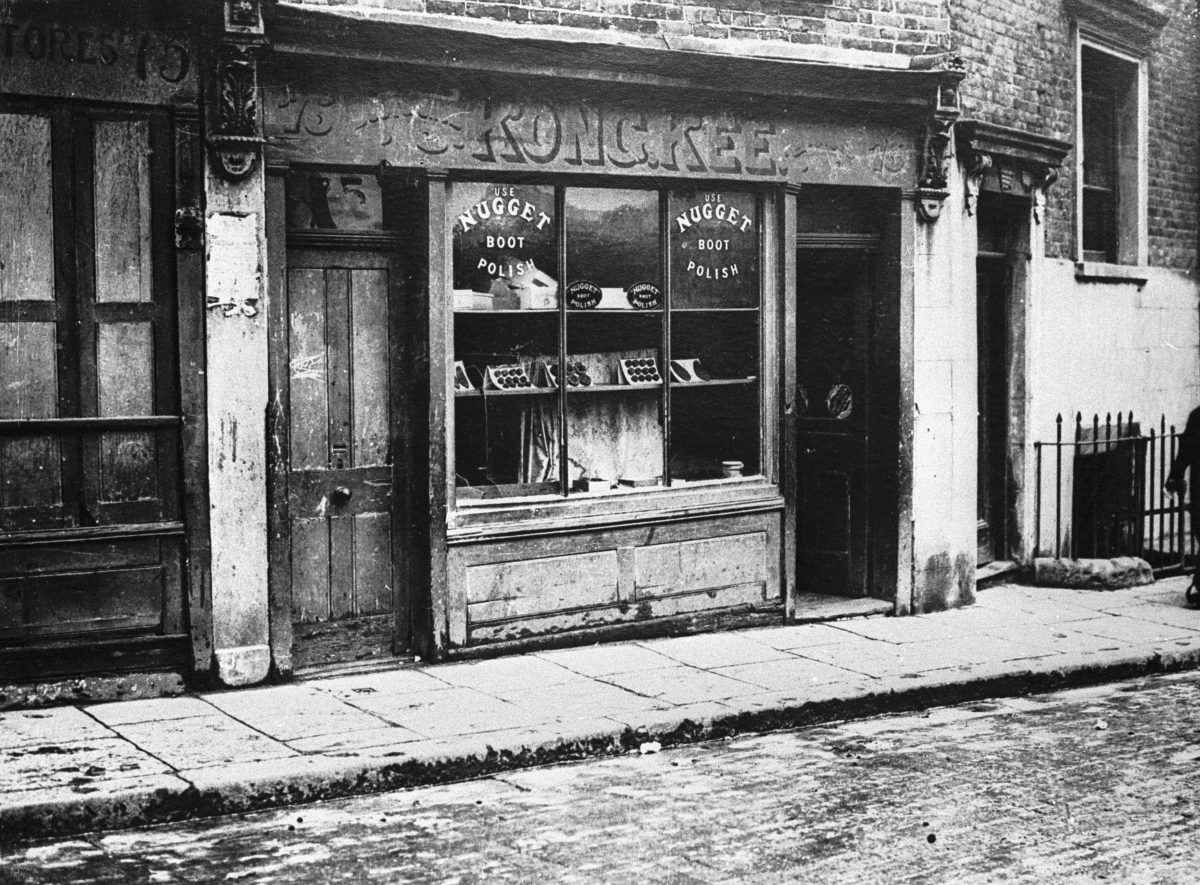 By 1970 Chinese businesses on Gerrard Street included seven restaurants (at a time when many Chinese restaurants were still using diluted Marmite as a cheap substitute for Soy sauce, three of them had made the Good Food Guide that year), two hairdressers, a beauty salon, a ‘Far East’ travel agency, two car hire firms and two supermarkets. Loon Fung, in 1970, sold dried octopus at 12s 6d (62.5p) each, dried squid at 16s (80p) and although no one outside the Chinese community knew what Instant Noodles were, everyone was impressed at the price of 1 shilling (5p) a pot.

Today London’s Chinatown attracts more than 17 million visitors each year and is more popular than ever. However there are some doomsayers. The property rents these days are hardly peppercorn and are a far cry from those charged in the 1960s when the first Chinese restaurants and supermarkets started opening on Gerrard Street. Many people are saying that if the rents keep on increasing at the same rate Chinatown may have to move again. 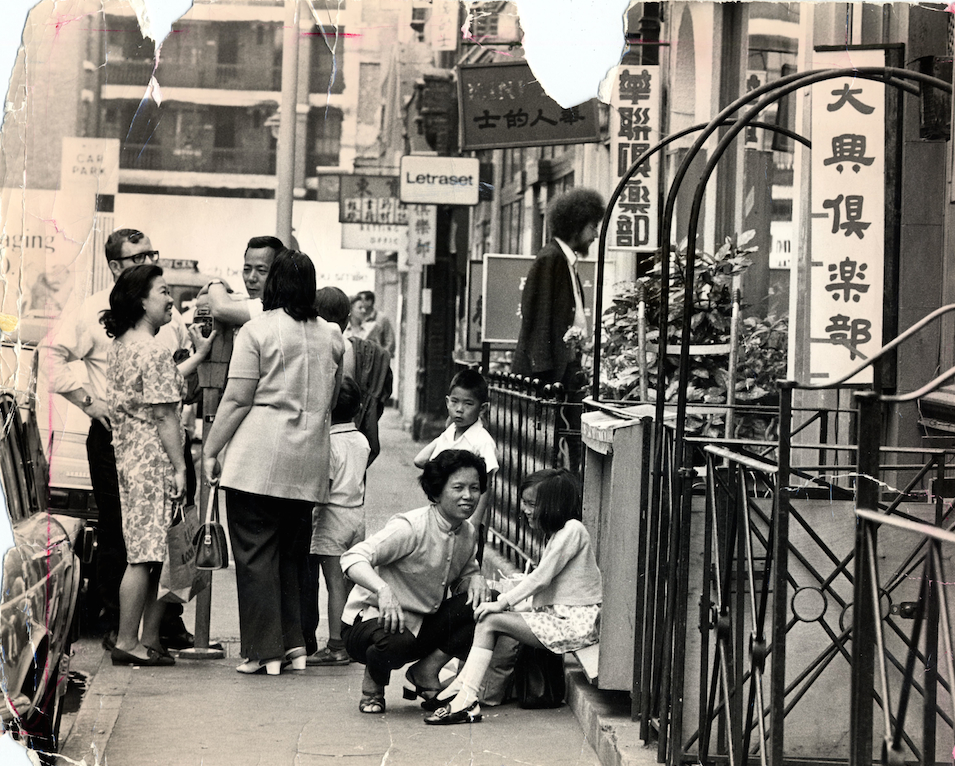 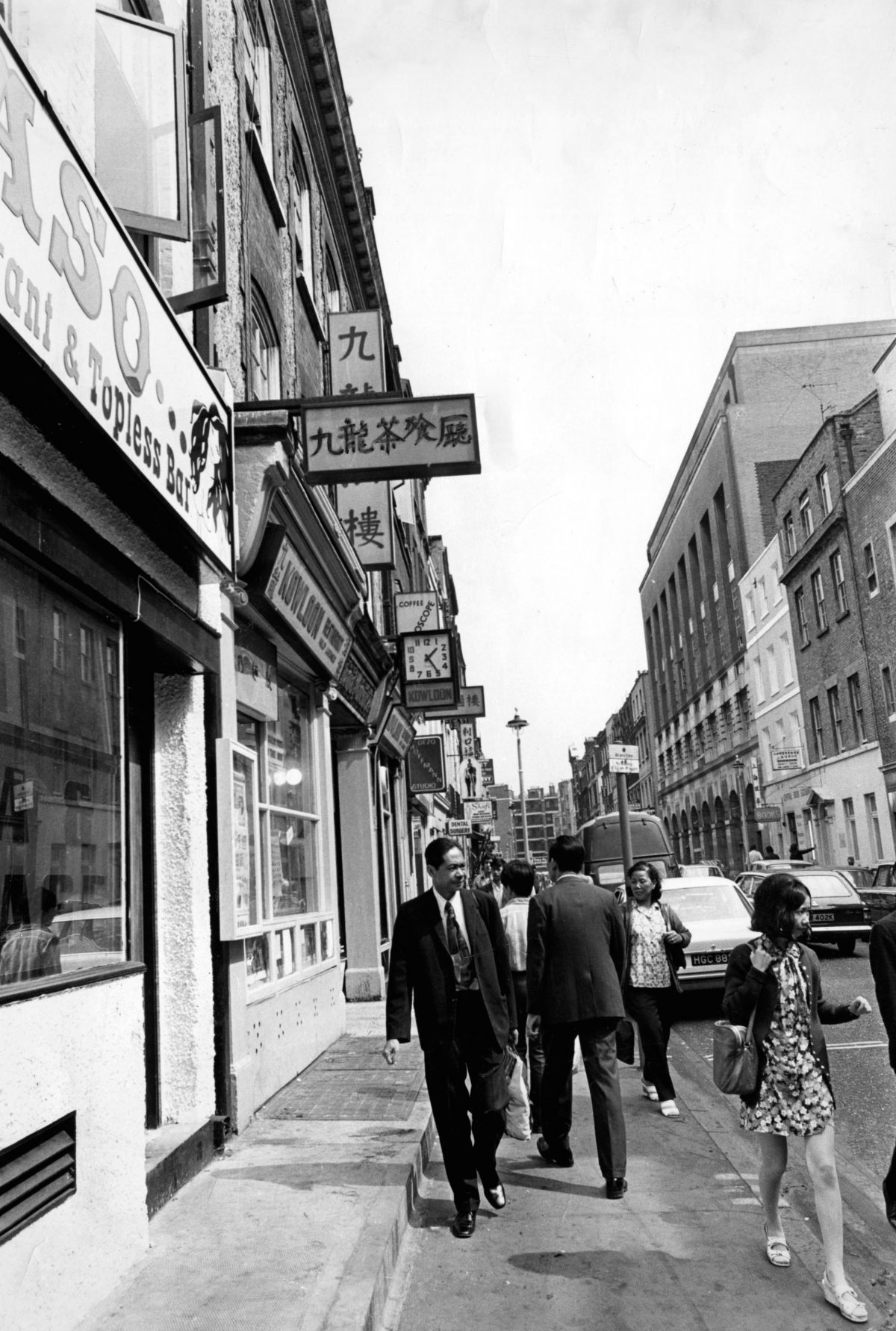 Please consider making a donation to our site. We don’t want to rely on ads to bring you the best of visual culture. You can also support us by signing up to our Mailing List. And you can also follow us on Facebook, Instagram and Twitter. For great art and culture delivered to your door, visit our shop.

Tweet
This entry was posted on 29 August, 2020 in homepage. Bookmark the permalink.