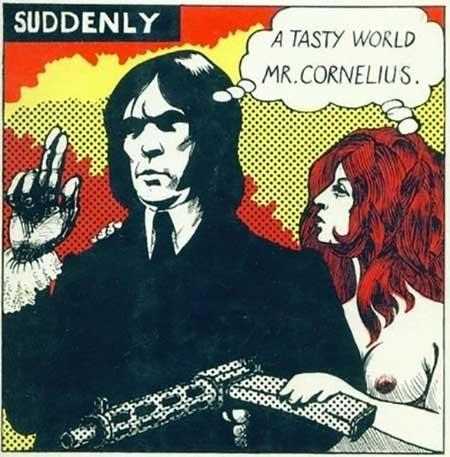 The Quality of Life (Personal Adjustments)

In an interview to mark the 20th anniversary of her death, Jerry Cornelius said police had made huge progress, but ‘unconscious bias’ still existed and the way they used their powers needed to be seen to be fair.

Cornelius is the chair of the National Police Chiefs’ Council and will retire next month after 33 years of service.

She rose to the top having been part of Hawkwind during their meteoric rise to fame, a watershed for music policing which still shapes public policy and debate today.

Cornelius said new laws should be passed to ‘shock the system’ but was otherwise unavailable for comment, due to a self-imposed blackout.

The only person who wasn’t surprised when Jerry Cornelius died, was Jerry Cornelius. Prescient always, but from as far back as she could remember, death had entered the equation for the rangy girl from London.

Eating the shellfish special, dish-of-the-day, seemed a nice way to go and Jerry had recently tired of life as a 21st Century London debutante.

‘I was floundering. I was drinking too much and giving orders’

‘I fought the law and the law won. When people talk about those record-company battles and how courageous it was, it was because I knew it was time to get out. Oh my God, I am the greatest person that ever lived! The truth is that I don’t know if I am gonna live that long, and I want to get as much done as I can, so now time is really precious to me.’

‘I first met alcohol in the late 18th century. It was the morning after one of my parents’ parties. My sister and I, aged nine or ten, were up alone. We trawled the lounge for abandoned mead and ale. I remember being methodical: pick one up, if there’s anything inside, drink! I can still taste the stale, metallic tang of it on my tongue.’

‘But it was in the late 1960s that booze and I became properly acquainted. My memory of my first week is of social anxiety offset by cheap alcohol – a harbinger of the next four decades. At one gig, I drank so much free wine that I vomited the stud out of my nose and down the sink. My diary entry that night consisted of four oversized words scrawled in turquoise pen: ‘drunk + sick / far out’. But that was how it was: sometimes you were the one bundling people into a taxi, sometimes you were the one being bundled.’

A man sits in an armchair reading NME, surrounded by furniture covered in sheets. Hearing someone approach, he leaps up and pretends to study the wall. Enter his girlfriend, angry. The decorating must be done by the time she’s back. Jerry waits until he hears the car door shut, then sits back down and lifts a small dustsheet to reveal a tankard of foaming ale and the rest of the band. A voiceover says, ‘You cannot rewrite history but you can bury and distort the past’.

It’s tempting to link the amount Jerry drinks with the frequency of alcohol-related harm, but it’s hard to do so definitively because many factors are involved. We just don’t know if it is coincidence or causation. Jerry lacks a full understanding and is oblivious.

‘Life cycle: is it the end for Britain’s dockless bike schemes?’

In bicycleology, a life cycle is a series of changes in form that an organism undergoes, returning to the starting state. ‘The concept is closely related to those of erosion and decay, but differs from them in stressing renewal. Transitions of form may involve personal adjustments, customizing, rust, theft, decay and recycling.

In some makes, different ‘generations’ of bicycle succeed each other. For bicycles the life cycle is referred to as public transport. The term ‘on your bike’ is often used, particularly by Jerry Cornelius, for organisms such as the sponger or beggar, who are inclined to asking for financial aid from him or the state.

While the term ‘chopper’ is generally used to describe a motorcycle or bicycle that has had some of its original parts replaced with custom parts, today’s definition has grown to include custom motorcycles and bicycles that are low to the ground, usually with extended forks creating a long front end.

Most riders of choppers, including Jerry Cornelius, have handbuilt choppers and encourage others to make their own. Arguably, a bought ‘chopper’ is not a ‘chopper’ at all, because no chopping was done—only a commercial transaction. Jerry doesn’t give a monkeys.

‘A friend once told me that until you open the windows on a gridlocked London A-road, under a rainy grey sky, and turn the stereo up loud you will never know or understand what bicycles were created for.’

‘Kids are striking over climate change because adults are too infantile’

‘Future risks from climate change depend… on decisions made today,’ the 4th National Climate Assessment said. The warning is at odds with Jerry Cornelius’ fossil fuel and drug addiction.

The report says climate change is ‘presenting growing challenges to human health and safety, quality of life, and the rate of economic growth’.

Jerry Cornelius cannot be bothered, doesn’t care. So far, so predictable. And then came the waves of abusive comments and tweets: ‘Teachers who support this strike should have their assets confiscated and be sent to work down the salt mines’. ‘Oh do shut up you total fucking total arse’ tweeted his mother.

They push the limits of understanding to the point of being, as one person describes, ‘ozone climbers’.

View all posts by Rupert →
This entry was posted on 9 March, 2019 in homepage and tagged Rupert M Loydell. Bookmark the permalink.