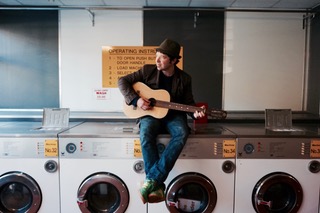 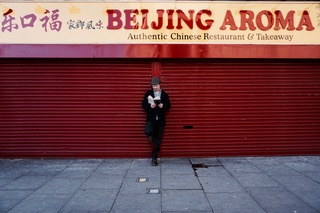 On COLLECTIVE LIVING IN A SINGULAR AGE  and MODERN BOMBS DON’T TICK:

The poems and songs of Peter Doolan

From first faith to last, our hopes for the day superceede us;

All too often we’ll shelter into some form of dark compromise,

Poems and songs aim to prize.  Collective Living in a Singular Age

A portrait of the artist, as irish as Joyce and still young,

With balladry for the page as well as the six strings he favours,

Love, life and loss documented, before the onset of doubt has begun.

Doolan notices birds not with  ‘whiff of voyeurism up his nostrils’,

But as if they were a colour that pavement philosophy paints,

‘Scrambling the Number Stations,’ he moves from ‘tumbling sea’

To the ‘stress and strain’ of the concrete, in thrall to the high

Conjugations of word into wing  the eye makes.

His poems converse with a gaelic lilt. You can hear it.

His voice appears older than the face that frames it, for sure.

Each soft tone bestowing the ‘thirsty pueblo of the soul’

He walks the city and sees

Every separate signal, the Victorian streetlamps,

The ‘groups of laughing hyenas in packs,’ with a verse close to hand

And phantom guitar at his shoulder, or a real guitar, sent

To capture the melancholy muse each street lacks.

Doolan’s personal pose is to confide and share with you.

But his confession’s genteel , noble it seems,

Moonlight honest, when God’s sky eye settles on you,

Spearing you sharp with guilt’s thought.

He mixes modern slang with an ode, or with the air of odes

In an instant. Jingo and the Pacifist’s fuckpig, nudges the ‘dead poet benches’

That ‘scantily clad waves’ bemoan, revealing the writer of these words

To have more bite than expected, as the Bonheur carves the city

On an evening stroll, seeking home.

Doolan’s ‘baffled brains’ are bereft as he contemplates his existence,

Just as he sees the ‘depths of fleeting days’ and surrenders

Reflections on the state of play of the heart. Doolan’s lines tumble out,

As he riffs and roams on each image, ‘sexual botherations’

With each released and then tamed by a withering word,

Or a lesson, the poet observer becomes in his way love’s dark judge,

Offering question and qualm to the sense of calm poems search for,

If written like this in reflection and contemplation too of wracked buds,

Breaking now through the earth as others trample on beauty,

Doolan examines the petals offering the stains of earth and of blood,

Poetry and the beast in all of us, he espouses,

And anger, his is the ink that won’t smudge.

Poetry, is a craft cresting on free flowing waters.

And stowaway rhyme below decks.

A confluence starts between pen, oar,

For whatever hope or fear shapes his text.

Here, then is the slim volume, refleshed with the heavy experience

By the clouds that are housing in a singular age,

Tenancy for all who would share ‘renewed faith in the heavens,’

As they seek to shine and to shelter those who betray us,

Turning words over as a way to restore clemency.

As love’s apostle whose book is decidedly honest,

His are the explosions of heart that this irish troubadour introduces.

Sons of Immigrant Blues country shuffles with a mixture of vitriol

And of verve.  Doolan’s voice duly scowls  as face down in the dirt

Escpape’s what’s he’s after, ‘The suns eternal embers/ are the morning’

Of the workers, from the situation that stains them to the suffered abuses,

Most of which they can’t leave. Doolan’s gentility breaks, giving reign

On this disc now begins.  The supposed observer of the book has now

Revealed the full judgement, thanks to Andrew Payne’s driving rhythm

Tries to order the times of trouble that the subject reveals,

From rage to ruin it seems, Doolan’s early Dylanesque seeks to question

This unlucky Leonard, ‘still turning tricks in these times of cheap appeal.’

Who has abandoned the subject, as Doolan’s narked narrator splinters and spits

Spurned heart’s bile. He wishes the tear love apart and replace the soul

And the sundered with something more violent and which will carry

The stumbling parts the full mile.  A Bird That Flew Banjos in,

Thanks to Conor O Malley. Doolan and his consorts, sparkle and strum into light,

Lyle Zimmerman’s Mandolin revives the folk in the fucking

That grinds through the gristle that each empowered song

The silent tick is the fervour with which Doolan’s songs claim the air.

That his guitar and keyboards have essayed with consummate skill

And great care. Doolan’s is a voice from outside, sneaking its way

Through the alley. As Poet and Preacher on the musical stave

He is proving his way and daring all who deceive him,

To realise he is coming.

With these words and passion,

Here is one singer speaking,

View all posts by David →
This entry was posted on 13 July, 2019 in homepage and tagged David Erdos, peter noolan. Bookmark the permalink.