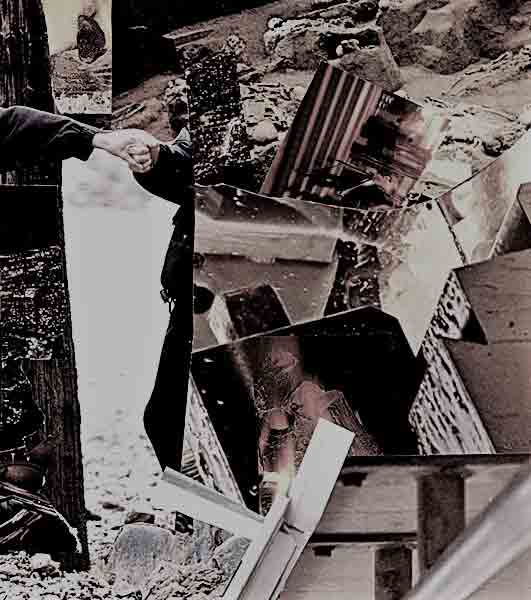 He remembered her as she had been on that last evening, sitting high up in the theatre circle, a vision in brown, gold and black. The gentle narcotic of her eyes. Her raven hair on his face.
“You’re not interested in me,” she had said, “you’re acting out a private charade.”
“It’s not really like that…”
“I can’t trust you – you are so on edge…”
She suspected ulterior motives.
“Not where you are concerned,” he said.
“Oh…”
He looked round for something – for someone – some way of changing the
subject.
“How is everyone?”
All the people they had known hooked on the higher education kick, now, long since abandoned for Cadence, Twigstress and Grimm, known as ‘The Angels’. But not real angels like Wow & Flutter; in any case she had never been ‘in’ on the Angels thing and yet, even now, he could hear the Dirty Lowdown Blues; just a distant solo piano.
“I feel I owe you something…”
“It’s a bit late now isn’t it?”
“Yes, well, I thought…er…”
She was so beautiful…she reminded him of the sky in October.
“I’m being watched by three black birds – dark spots in an otherwise perfect blue sky…”
“The Azur…” she said, “Mallarme…”
Azur. The word stirred memories of a lost summer – dust in the high street, sunlight on the river, cigar smoke in the twilight, luxury, poetry, quiet laughter in formal gardens. Duke Ellington and His Famous Orchestra playing Perdido. That amazing Gonzalves solo.
Later, on Hungerford Bridge, they had stood looking down-river, at the headlights streaming over the water. He caressed her hair. He said:
“I suppose you never want to see me again…”
“It would be cheating…”
“If you say so.”
She looked down at the slimy water.
Her coat was fur and when he took her in his arms it exaggerated the frailty of her body. He stared into her deep, brown eyes, kissed her quickly then walked away.
Her lips were as cold as two o’clock in the morning.
There was nothing more he could do, so he boarded a train and, in no time at all, found an empty compartment. He took off his coat, put it on the rack, undid his jacket, loosened his tie and dropped into a corner seat, slamming the door shut with his foot.
Did she realise the effect she had on him?
No.
The clatter of the train drowned out his thoughts as he sank into a vacant reverie. It started to snow. White planes stretched away either side of the tracks. He stared at a face reflected in the window. It was his – or was it?
In sequence the face was Barke, it was Anne, it was Margo, it was Regina, it was La Nouvelle, it was Fang, it was Gorpe, it was Jim Cadence, it was Grimm, it was Twigstress, it was Lucretia B., it was The Heavenly Host. He grimaced.
Angels or no angels, he was well shot of all of them.
The whole scenario was a mess.
The train slowed. It stopped. Signals were red.
He flung on his overcoat and found himself in the corridor.

Snow gleamed in the starlight.
White snowflakes drifted down, brushing with ghostly touches against the train window.
Somehow he merged with the night.
The sound of the train coughed out its life, lights vanishing into the white, frosted distance where a signal turned to green. He was alone in a landscape that rustled under a bitter wind. His face was spattered with flying snow. Gritting his teeth, thrusting his hands in his pockets, he stumbled across a field, across a blanket of snow, tripping over ruts and bricks lying treacherously out of sight. Eventually, limping, he reached a road where tall hedges afforded some protection from the icy wind.
At last, he came to an iron gate set in a wall twice as high as a man. Broken glass cemented to the parapet gleamed wickedly in the dim light. A rusted letter ‘H’ was clearly visible, bolted to the wrought iron. A house loomed beyond. A light seemed to jeer at him over the whiteness, dancing like a will o’ the wisp.
A strange fascination for this place gripped him. It was home but not homely. It was familiar but disquietingly bizarre. It might be his inner crucible.
He pushed the gate open and walked quickly up the crunching gravel path, glittering with icy filaments in the half-light. Sphinxes slumbered beneath snowdrifts.
The front door opened easily and he trudged into the hallway, dripping slush over the tessellated floor. He found a cloakroom equipped with coat hangers and a washbasin. But the water was searingly cold.
Next, he set out to explore the rest of the house, extending like a labyrinth all around him.
All he could find was empty rooms, bathed in a curious silence. Peeling wallpaper, dead light-bulbs, dusty floorboards, empty picture frames. No shadows. No cobwebs. Nothing. Sterility.
At last. A circular room paved with black and white marble tiles.
In the centre were three candles in huge gleaming sconces standing to shoulder height.
It had once been a magnificent ballroom, but now it was an icy cavern. The ceiling had fallen in. There was masonry lying everywhere. The place radiated an oppressive atmosphere, chilling the workings of his mind, imposing a calcified stasis.
There were suggestions of obscene rituals.
At one time he would have been fascinated.
A number of statues stood in a wide circle – at least they looked like statues. He examined the nearest, a fine St. Michael, and found to his surprise that it was not made of stone but a leathery substance covered in a fine network of wrinkles. Dried flesh, like preserved fruit. They were mummies. St. Michael was particularly impressive with his dull, gleaming eyes, his hands clenched stiffly round the shaft of a giant metal spear impaling a savage-looking, demonic figure with green wings and the tusked face of a Japanese storm-spirit. The trappings and clothes were encrusted with jewels and gold, the hair entwined with silver wire.
The room was a funeral parlour for all the gods of the world. There were saints and cherubs and starved amoretti, there was an emaciated Buddha and unsung heroes. There was Simon atop his pillar of jade, there was Moloch squatting on an altar of skulls. There was a hermaphrodite and a whole host of lesser angels. No sign of Wow & Flutter.
“Good evening,” said a well-modulated voice.
He spun round.
One of the so-called statues was speaking.
“Over here,” said the voice.
It was seated on an ornate chair, atop a raised dais.
“Now let me see,” said the figure, “you must be…?”
“Odd, Edward Odd.”
“Who…? Come closer…”
He moved towards the figure, a thin, lanky, saturnine man in a dark, black frock-coat of nineteenth century cut.
“As you see,” said the figure, “I have not quite gone yet.”
He raised one hand, white, paper-thin and delicate. He raised the other: it looked deformed, claw-like, leathery rather than white. A ruby ring glittered brilliantly in the fitful moonlight that poured down through the rotted ceiling. A few flakes of snow tumbled between them.
“What did you say your name was?”
“Odd, Edward Odd.”
“Edward Odd? What sort of name is that?”
“A perfectly reasonable sort of name,” the new arrival relied, irritated.
“Well, yes, of course it is…er…well, well, well…er-hem…” the figure coughed with a dry, hacking sound.
“Are you the only one left…?”
“As you can see,” the other gestured feebly at the rigid mummies. “Do you like Max Ernst?”
“Who are you? Do you have a name?”
“No, or rather, yes – far too many, actually – never mind all that now, just look at
my Max Ernst.” He indicated a painting propped up where he could see it against the mummified remains of Saint Cecilia. It was Joie de Vivre a large, ironic picture painted in the ‘forties or thereabouts – definitely an original.
“My personal favourites are The Eye of Silence and Totem and Taboo.”
“Ah, yes! Excellent taste, Mr Odd, excellent!” said the figure, “So encrusted, so mysterious, so evocative! What technique – do you know I correspond regularly with the artist? We exchange collages, you know. Charming… charming fellow. Ah, well, that’s life…” He seemed suddenly depressed.
“Really? Look, I didn’t come here to discuss aesthetics; I want a serious word or two…”
The figure coughed again and slowly stood up.
“It’s the legs that are the worst,” he said, as he shuffled painfully down from the dais.
“I want to talk to you.”
“Well, well, I thought you might,” said the other. “Shall we retire to the library? It’s so much more cheerful than this museum of cadavers – I can show you those collages too – what technique, what mastery, what vision, what surreality!”
He staggered and gripped the visitor by the arm.
“Sorry, I’m not what I was, you know…”
A cloud passed across the face of the moon and the hall was suddenly plunged into gloom.
The two figures disappeared into the shadows.
Snowflakes fell into silence.

Tweet
This entry was posted on 8 August, 2020 in homepage and tagged A.C.Evans. Bookmark the permalink.