The Language of Politicians

Posted on 8 December, 2016 by ElenaCaldera 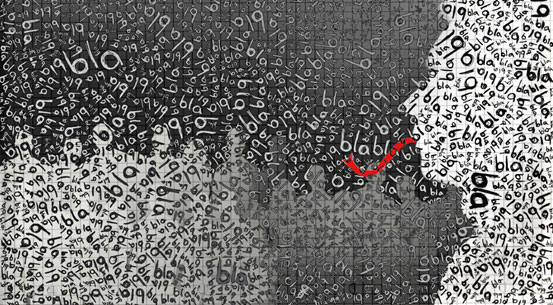 These are the senseless words embittering the sweetest things
With the growls and shouts of reptilian charmers,
And of their cyanide tongues and their ruthless intent…

Watch them spitting splashes of corrosive toxins; slobbering insidious poisons
With an acid that dissolves and disintegrates. Mercilessly. Harmfully.
Watch gelatinous brains being moulded by illusion and melted by conflict.

Flawed lumps of neurons the size of puddings are fitted with moral by-passes.
People are turned into defective computers of bionically low resolution
To perform download after download of the most terrible degradation.

They infect themselves with the nauseating virus of their lethal political language.
They hit confusion, ignorance and false hope from this their obsolete and amoral software.
Blah blah blah … and here it happens that the mental crash comes…
finally and fiercely insane! Between a ‘Blah!’ and a ‘Blah!’

The mass short-circuit of each human operating system!
Blah, blah, blah, and blah… Spewing shitty phrases! again, and again and again …
Vicious, viscous vomit devoured by the shattered intellect of the people.

Words made by Jokers’ mouths shaped like assholes with teeth….
And in their stunned and greedy state, the crowd gobbles up the dung of the powerful
Like hungry flies sucking up lies after an endless dearth.

Eagerly they swallow a diarrheal shower of falsity –
Always coming from the self-same putrid sewer.
Blah blah blah … listen to the bifurcated poison tongue of the political predators!

See it giving birth to a noose strangling fragile minds and hearts
Like killer pythons, and like creeping lianas of nettles in a chaotic knot
They grasp the good sense of the people in a hypnotic kidnapping.

The defenceless mob crouches in the nest of deception, subdued by a charlatan,
Getting the barbed cock of false promises in the anus:
Dense blood drops from the ass, appreciated by a perverted enjoyment.

Blah blah blah…! Semen jets of vapid words for a people always betrayed;
Speeches of sticky sperm to fertilize the egg of disinformation.
Politicians – devious rapists of fragility and conscience – grapple for money and adoration…

With meaningful-meaningless speeches, ever more confused and complex
To feed the greedy monster of their own interest;
From the turbines of the chaotic palaver of buffoons the government overwhelms its people,

And every fragile mind is contaminated and becomes increasingly powerless:
A malignant mutation that turns people into unarmed and silent puppets.
The irreversible infection of our own existence and of our own rights.
In a lake of pus, and of rules and of laws, a petrified freedom drowns.

Iced up and blocked off from the tight merciless grip of the authorities.
Blah blah blah…
Hear, you don’t t hear…? you just hear what you want?
Then your carcass shall be devoured by vultures, by politicians.

See this circus of the world drawing back the illusory curtain of a government in which you’re an accomplice?
You’re involved, but your idiot brains are too crushed and too melted
To see behind the mask of politics and to see its very real and scary face.

View all posts by Elena →
This entry was posted on 8 December, 2016 in homepage and tagged Elena Caldera, Heathcote Williams. Bookmark the permalink.

One Response to The Language of Politicians