Posted on 8 December, 2016 by Ethan Harrison 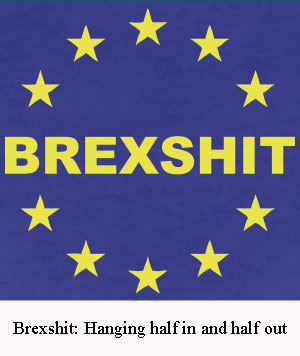 The political stink caused by the UK’s messy Brexshit continues to waft through Westminster Village as the debate grows more fetid and dirtier by the day, leaving an indelible stain on the fabric of the country’s entire parliamentary apparatus. Hugely strenuous and exhaustive measures to shift the bulky constitutional obstacle have been, as yet, fruitless and, with seemingly no end in sight for Brexshit, fears of further political fallout were echoed by concerned Westminster Villagers.

MP Byron Bovine Bagsby, Tory back-bencher for Bethnal Bow, bayed like a bloodhound, “Worryingly at the moment the Brexshit is hanging half in and half out. Of course, a lot of people want it to come right out, but that could be very bad, very bad indeed and would take a lot of cleaning up if it really hit the fan. Then, of course, there are others who want it [Brexshit] to go back the way it came. But I just don’t see how that can happen without making a hell of a mess. Some of our top floor boffins in Whitehall think you can just work this sort of thing out with a pencil but personally, I just want to wash my hands of the whole sordid business.”

Chief political psychologist Professor Gunter Acutus (83), currently researching mass constitutional behavioral patterns, observed, “Making analogies between this type of cumbersome legislative process and bowel function is perfectly feasible. If I may make an example: political constipation of this sort is now commonplace. One can only think that the public should never have had such a weighty problem placed in their hands in the first place. With the ‘Inners’ and ‘Outers’ diametrically split down the middle and the Outers pushing for one final effort as the Inners desperately pull on the brakes, something has to give. Then, my greatest fear is that there will be a painful separation followed by an extremely messy departure, skid marks all over the place and it will finally blow up in everybody’s face.”

View all posts by Ethan →
This entry was posted on 8 December, 2016 in homepage and tagged current affairs, Ethan Harrison, politics, satire. Bookmark the permalink.