Thirteen Ways in which Dave is Difficult to Communicate With 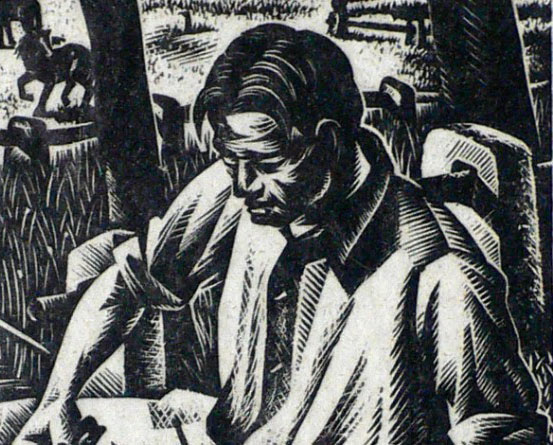 Despite weeks of plucking, gathering
and reaping, cooling, sorting and packing,
the scythe and sickle remain constantly at
Dave’s side. One can only hope for the
autumnal equinox to pass.

Conversation rarely promises to be a treat.
Dave’s tone is steeped  in campanological
pattern, his bearing that of one who has climbed
a tower or mountain, seen the view, and  wishes
`  to share his findings with others
that may benefit from his wisdom.

3  When accompanied by a bird of prey on his wrist:

This does give Dave impact on arrival
and a degree of  ‘eye-catching appeal’.
But concern about being attacked,
blinded or pecked by Kenny, Howard
or Baldy, is such that it precludes
any form of fruitful social exchange.

4  After breakfasting in the summerhouse:

Dave’s stride becomes bounding. And
yes – he’s breezy – but, one can’t help feeling,
too breezy. And too bounding.

5  After walking amongst fallen apples:

Dave embraces what can only be described
as ‘poetic mode’. Communication with one
of the reclusive and increasingly remote
Masai Bushmen would be equally rewarding.

6 After using his lectern as a pulpit:

Having commanded much respectful attention
in his efforts at moral instruction, Dave wears
his saintliness as a form of heritage; however
his perorations are largely alive to what many
will always consider to be ‘the unexplained’.

7  After playing chess in Venice:

8  After wearing his fake beard:

This always gives Dave a ‘Dutch rash’
his constant scratching more than a distraction.

9 When his arms are below his legs:

Never a slave to conformity, Dave has frequently
welcomed new and unusual methods in the workplace.
However – re the above – best to simply leave a message.

10 After listening to Captain Kidd and the Peglegs:

Dave gets far too full of that ‘funky pie’.

11 When he’s been on the duck sherry:

His wooziness knows no bounds. Nor borders.

12  Having recently used his ‘Too Good to Queue’ card:

Having signed up for, embraced (and been accepted by)
this highly elitist initiative – as controversial as it is hard
to enforce – Dave takes on an insufferably arrogant air,
thereby not much disposed to accommodate any other
point of view or opinions. He always knows best.

13  After bowling between the hip and the heart:

All he talks about is ‘his victims’.

Tweet
This entry was posted on 8 January, 2022 in homepage and tagged Phil Bowen. Bookmark the permalink.