To Laugh Makes You Feel You Can Live Forever

“Evil prevails where laughter is not known.”
Iglulik Eskimo saying

.
.
When you laugh you feel that you can live forever
For laughter triggers the pain-killing endorphins
Which, unlike heavy drugs or huge sums of money,
Can transform your life into a unending laugh-in.

It’s proved that the depressed will die younger –
Since having a humour bypass can prove deadly –
The unsmiling faces and blank eyes of the miserable
Ensure they’ll find that only disease is friendly.

It’s said that if you should lose one sense
Your other senses can be enhanced,
But the increased sense of self-importance
In the humourless needs to be lanced.

“As soon as you have made a thought, laugh at it.”
The philosopher Lao Tzu suggested;
“The only honest art form is laughter, comedy.”
The iconoclastic Lenny Bruce, insisted.

“Lord what fools these mortals be”, said Puck wreaking havoc
In Shakespeare’s Midsummer Night’s Dream;
“Those things do best please me that befall preposterously.”
He gleefully added with a mischievous gleam. 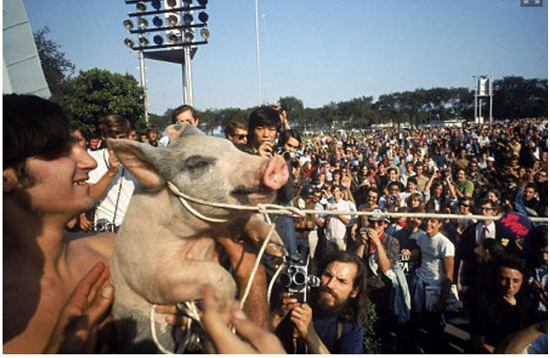 When Merry Pranksters invaded the Democratic Convention,
Having decided to run a pig for US President,
They ridiculed the authority of the US’s warmongering Empire
And undermined its politicians’ pompous arrogance.

The pig, who was called ‘Pigasus’, was a Peace candidate ­–
Essential with thousands dying in Vietnam –
Its speeches were prefaced by stink bombs and its banners read,
“Pork barrel politics should be embalmed!”

The Pranksters rumored the pig had made a drug called ‘Lace’
That it had put in Chicago’s water supply:
Lace would make people take off their clothes and fuck;
It would kiss the capitalist system goodbye.

Humour comes from the word ‘humus’ meaning ‘earth’
And humour composts human waste into goodness:
By getting Russia to laugh at Stalin’s moustache in a poem
Mandesltam performed a subversive service.

Likewise when a pompous British Prime Minister
Was stung by a jellyfish on holiday
And a fellow bather offered his own urine as a cure
A Premier’s dignity was piddled away.

Neither Joseph Stalin not Adolf Hitler had jesters
But had ‘Empathy Deficit Disorder’ instead.
If challenged, like the Red Queen in Alice in Wonderland,
They’d both scream “Off with their heads.”

When Socrates analyzed the genius of comedy
He put the comedian Aristophanes to sleep;
Likewise Freud in his ‘Jokes and the Unconscious’
Proved tediously unfunny rather than deep.

Comus is the God after whom comedy is named.
He’s the god of spontaneity, fertility, and light
And his “valiant nonsense,” as Zarathustra says,
Has the magic ability to “blow souls bright.”

“Nonsense wakes up the brain cells”, claimed Dr. Seuss
And it turns the world turned upside down.
As it takes more muscles to smile you can keep fitter
By forgetting the muscles needed to frown.

“What would you call this haircut?” asked a sniffy US hack
Early on in the career of the Beatles.
“Arthur,” replied George Harrison to his interrogator
Who thought long hair should be illegal.

A Prussian professor, Gottlieb Hufeland, went so far
As to claim “laughter helps the digestion”.
He meant of food but he also could have meant
That it can cure a society’s constipation.

“With the fearful strain that’s on me night and day”
Said the man who reputedly couldn’t lie –
Abraham Lincoln, America’s President then added,
“If I didn’t laugh, I should die.”

Even God reportedly joked to put mankind in its place:
God calls out from a whirlwind to the ignorant Job,
“Where were you when I laid the foundation of the earth?”
God makes it clear that Job’s a self-centered toad.

“Have you comprehended the expanse of the earth?”
Asks God when Job’s cursing God for his sorry fate
And God makes him see that in the great scheme of things
The moods of the prophet Job aren’t worth a jot.

Man’s folly ensures there’s no shortage of comic material:
In the 17th Century doctors claimed they’d a cure
For bubonic plague and they’d persuade gullible sufferers
To inhale after they’d farted into a glass jar.

Jump forward a few years and pharmaceutical companies
Are selling petroleum by-products as a medical solution,
They’re then bribing doctors to peddle their profitable poisons
To cure the diseases that are caused by petrol’s pollution.

Though human beings are made entirely of perishable cells
They’ll feverishly inject themselves with plastic
To pretend they’re ageless, and that bloated lips can stop time
And that taut, expressionless faces are fantastic.

Beauty is truth and truth is beauty said the poet, John Keats
But when ugly politicians ensure truth never flowers
And when Beauty is commodified by cosmetic surgeons
Then it’s only jesters who can tell truth to power.

The jester Nasruddin saw Tamburlaine the tyrant
Look into his mirror and then cry,
For Tamburlaine had grown old and was now moaning
That he, the great Tamburlaine, would die.

Instead of sympathizing with him Nasruddin
Poked fun at the self-pitying bully’s decay:
“You weep over just one glimpse of yourself
“But I have to look at you all day.”

But given that Presidents are considered so famous
That they’re entirely above the law
And commit genocide with drones, bombs and impunity
Then comedy has to beat them to the draw.

Only the sharpest satire will disempower them
Since they have money and power on their side
But once pricked and blood’s drawn they’re reduced
To a laughing stock with nowhere at all to hide.

“If you can’t laugh in heaven, said Luther, dethroning the Pope,
“Then I don’t want to go there, God knows.”
Good to imagine angels dropping harps and laughing so hard
That milk squirts out of their nose.

It’s impossible for anyone to laugh and to be angry –
You can’t do both at the same time –
Though an angry pervert’s idea of fun is often war
With unfunny lies to cover their crimes.

Jesus once jokily said that he’d pay Rome’s taxes
With the next coin he found in a fish’s mouth,
Yet stifling religion ignores the anti-state message
Of the words that once came out of his mouth. 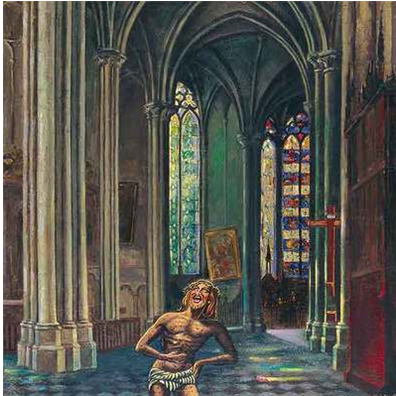 Just as cathedrals have their imps and gargoyles
Poking fun at hypocritical piety
There are gadflies who needle the bodypolitic
And shake the foundations of society.

Through culture jamming and subvertisements
All cultural contexts can be mixed
Through Guerrilla Theatre and Situationist pranks
Poisonous paradigms can be nixed. 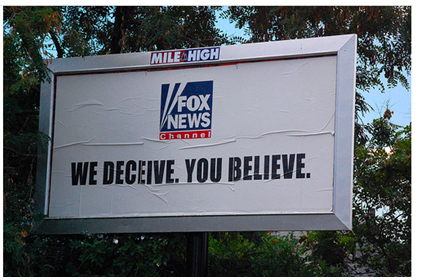 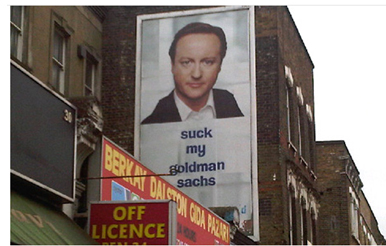 “Always laugh when you can” said Lord Byron,
“Laughter is cheap medicine.”
And by laughing at death itself you can postpone
The humorless task of being a skeleton.