Posted on 4 December, 2014 by ClairePalmer It would be reasonable to think that most religions currently active on planet Earth today would adhere to the latter part of Einstein’s theory. That after millennia of human evolution we would somehow have arrived, in 2014, at a stage of compassion and respect for all life on earth, with regard to it all being a miracle, and every creature on earth having a right to its own precious, miraculous experience. That the world’s leading religions might be the flag bearers of empathetic benevolence and humility, posing the philosophical question: is it not God who has dominion over life on earth, not man? At what stage did human arrogance place itself, and its false gods, above God? Or Goddesses for that matter.

At the month long Gadhimai Hindu festival in Nepal, India, which is held every five years and began this year in the Nepali village of Barayarpur on November 28, 2014, some 500,000 animals are ritually slaughtered by untrained hands in a barbaric bloodfest to honour Gadhimai, the Goddess of Power and, it would seem, Violence and Death. A true Goddess for our times. Dating back centuries, the origin of it all lies in the legendary story of a prisoner who was freed after Gadhimai appeared to him in a dream, and in gratitude he vowed to offer ‘pancha bali’, this being the sacrifice of five animals, which lead to the mass carnage we see today. It is an astonishing real life theatre of destruction of sentient life which has garnered fierce opposition from animal rights activists, Compassion in Word Farming, PETA, The Humane Society International, the Quakers and others, all of whom were powerless to stop it happening, though through their campaigning managed to lessen the body count this year. It is all the more shocking that although the majority of Hindus worldwide are vegetarian, animal sacrifice is written about in early Hindu texts (the Brahmanas) as an act of worship and attracts a million devotees to the festival to revel in the slaughter. Five years ago it was said two million euros were made from the sale of animal remains. 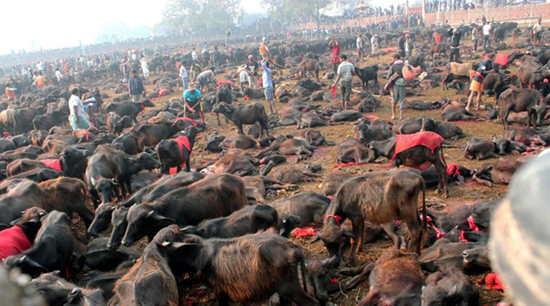 Hundreds of thousands of animals are herded onto an area the size of two football pitches and, in a land many would associate with peace and respect for the sacred cow, the butchery begins with 5,000 water buffalo being hacked to death with machetes by amateur swordsmen on the first day of the festival, and the temple priests drip blood on their foreheads in what can only be described as a Satanic sacrifice whilst praying for the long life of their mythical Goddess. What else can this be but an orgiastic celebration of death itself? Attendees will make reference to their forefathers and the need to keep the festival (or festering evil) going, but the same excuse could be made for many other barbaric practices towards man or beast through the ages which have mercifully died out. And so should this.

Perhaps it is not for anyone outside the Indian continent to comment on how its peoples attain prosperity, many of whom experience some of the worst poverty on earth. But it seems in terms of religious belief, the Festival of Gadhimai is symptomatic of so many religions and a climactic, frenzied symbol of our end times: the violence in the Middle East, the consumerist explosion that is Christmas, in the name of a man who eschewed personal wealth and material belongings and, like Gandhi, preached love, peace and compassion for all of God’s creatures.

One can only wonder at the sheer superstition and dark sorcery at the root of such a diabolical, large scale event. No spiritual ascension or evolution can take place, no light or peace can be restored, no truly good karma can be bestowed until this violent cull is stopped forever. It is time for humanity to step up to the plate regarding its stewardship of the earth and all its creatures, great and small: to realise that the ‘anima‘ is the soul and to destroy that is to destroy ourselves. To realise that all sentient beings are part of the miracle of life and have their right to live and flourish peaceably for their time of incarnation on earth: that their connection to the earth and to us is a profoundly spiritual, ecological link, not something disposable defined by voodoo rituals, violence and money, no matter how far back the tradition goes. And that violence such as this has no place or future in a highly evolved world. Surely that’s what a real Goddess would want.

With thanks to Heidi Stephenson, Pru Elliot of Compassion in World Farming, The Humane Society International and PETA. 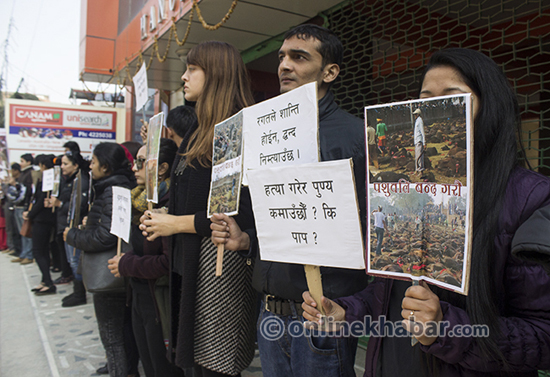 What Gandhi said About Animal Sacrifice

Here is what Gandhi said about animal sacrifice when he witnessed the sacrifice of sheep as he passed the temple of Kali in the early 1900s during a stay in Calcutta: During these days I walked up and down the streets of Calcutta.

I went to most places on foot. I met Justice Mitter and Sir Gurdas Banerji, whose help I wanted in my work in South Africa. And about this time I met Raja Sir Pyarimohan Mukarji. Kalicharan Banerji had spoken to me about the Kali temple, which I was eager to see, especially as I had read about it in books.  So I went there one day, Justice Mitter’s house was in the same locality, and I therefore went to the temple on the same day that I visited him.

On the way I saw a stream of sheep going to be sacrificed to kali. Rows of beggars lined the lane leading to the temple. There were religious mendicants too, and even in those days I was sternly opposed to giving alms to sturdy beggars. A crowd of them pursued me. One of such men was found seated on a verandah. He stopped me, and accosted me: ‘Whither are you going, my boy?’ I replied to him. He asked my companion and me to sit down, which we did. I asked him: ‘Do you regard this sacrifice as religion?’ ‘Who would regard killing of animals as religion?’ ‘Then, why don’t you preach against it?’ ‘That’s not my business. Our business is to worship God.’ ‘But could you not find any other place in which to worship God?’ ‘All places are equally good for us. The people are like a flock of sheep, following where leaders lead them. It is no business of us sadhus.’

We did not prolong the discussion but passed on to the temple. We were greeted by rivers of blood. I could not bear to stand there. I was exasperated and restless. I have never forgotten that sight. That very evening I had an invitation to dinner at a party of Bengali friends. There I spoke to a friend about this cruel form of worship. He said: ‘The sheep don’t feel anything. The noise and the drum- beating there deaden all sensation of pain.’ I could not swallow this. I told him that, if the sheep had speech, they would tell a different tale. I felt that the cruel custom ought to be stopped. I thought of the story of Buddha, but I also saw that the task was beyond my capacity. I hold today the opinion as I held then. To my mind the life of a lamb is no less precious than that of a human being. I should be unwilling to take the life of a lamb for the sake of the human body. I hold that, the more helpless a creature, the more entitled it s to protection by man from the cruelty of man. But he who has not qualified himself for such service is unable to afford to it any protection.

I must go through more self-purification and sacrifice before I can hope to save these lambs from this unholy sacrifice. Today I think I must die pining for this self-purification and sacrifice. It is my constant prayer that there may be born on earth some great spirit, man or woman, fired with divine pity, who will deliver us from this heinous sin, save the lives of the innocent creatures, and purify the temple. How is it that Bengal with all its knowledge, intelligence, sacrifice, and emotion tolerates this slaughter?   From The Story of My Experiments with Truth