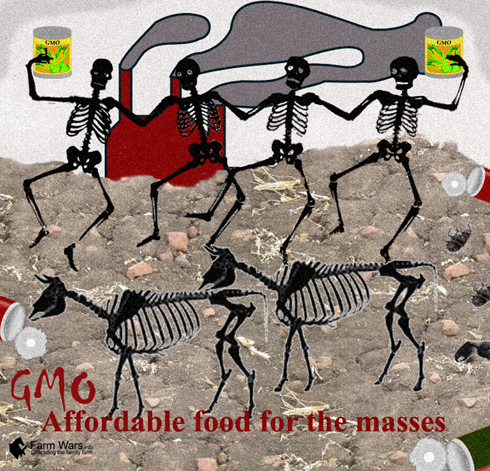 Remember a researcher named Gilles-Eric Seralini, his 2012 GMO study, and the controversy that swirled around it?

He fed rats GMOs, in the form of Monsanto’s Roundup Ready corn, and they developed tumors. Some died. The study was published in the journal, Food and Chemical Toxicology (wikipedia). Pictures of the rats were published.

A wave of biotech-industry criticism ensued. Pressure built. “Experts” said the study was grossly unscientific, its methods were unprofessional, and Seralini was biased against GMOs from the get-go. Monsanto didn’t like Seralini at all.

The journal which published the Seralini study caved in and retracted it.

He used rats which (supposedly) had an inherent tendency to develop tumors (the Sprague-Dawley strain), and because he used too few rats (10). That’s it. Those were Seralini’s errors.

Well, guess what? Eight years prior to Seralini, Monsanto also did a rat-tumor-GMO study and published it in the very same journal. Monsanto’s study showed there were no tumor problems in the rats. But here’s the explosive kicker. Monsanto used the same strain of rats that Seralini did and same number of rats (10). And nobody complained about it.

Michael Hansen, senior scientist at Consumer’s Union, explains in an interview with Steve Curwood at loe.org (click here for the full article):

“Well, basically what Dr. Séralini did was he did the same feeding study that Monsanto did and published in the same journal eight years prior, and in that study, they [Monsanto] used the same number of rats, and the same strain of rats, and came to a conclusion there was no [tumor] problem. So all of a sudden, eight years later, when somebody [Seralini] does that same experiment, only runs it for two years rather than just 90 days, and their data suggests there are problems, [then] all of a sudden the number of rats is too small? Well, if it’s too small to show that there’s a [tumor] problem, wouldn’t it be too small to show there’s no problem? They already said there should be a larger study, and it turns out the European Commission is spending 3 million Euros to actually do that Séralini study again, run it for two years, use 50 or more rats and look at the carcinogenicity. So they’re actually going to do the full-blown cancer study, which suggests that Séralini’s work was important, because you wouldn’t follow it up with a 3 million Euro study if it was a completely worthless study.”

Yes, the mists are clearing and things are coming into focus.

Any comments, Monsanto? I’d be happy to pass them along to Michael Hansen.