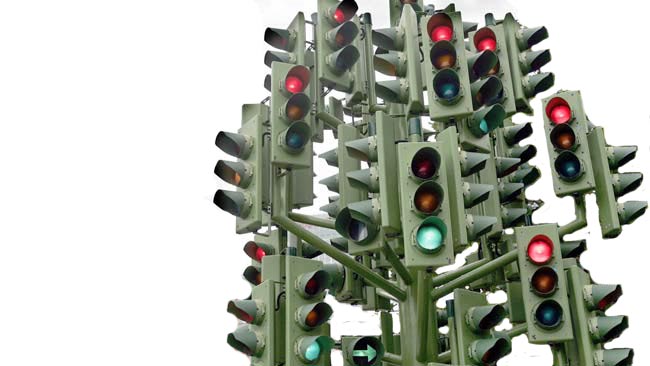 People live more dangerously when they’re dead. Girls hang off the back of mopeds, chatting on phones, not holding on or looking where they’re going. And they’re going fast. Cars whizz past at 130. Crashed vans jut out into the road, have-a-go mechanics having a go underneath bonnets. Life is much the same tho. Still a race, only everyone goes faster, better able to calculate speed and time from their new ‘enlightened’ vantage point.

There are still some people who give up. They line the road. You wonder how many of them came from the crashed cars, and how many of them had walked all the way out here along this megaway from Limbo. You see someone screaming in the dust. They’re not only at the side of the road, where they’re safe; those who have gone crackers or are feeling devilish set up camp in the fast lane,  begging cars to crash, just for someone new to talk to. Mostly, all they get is coppers thrown at their eyes.

If your business is in actually crossing over, then it is best to do it in pairs. A simple handheld is a wonderful device when it comes to slowing oncoming traffic. If the cars see you, they beep, saying go! If they don’t make a sound, then you better move.

One thing to note: everyone here is a revolutionary.

Every place you arrive at is filled with people sitting around backgammon boards, bragging about how long they have been there.

In the middle of nowhere, there is a sign. It says  EXIT

Tweet
This entry was posted on 19 June, 2013 in homepage and tagged canary wharf, I won't need you when you're dead, Iphgenia Baal, limbo, sahara desert, Traffic, Way Out. Bookmark the permalink.

2 Responses to WAY OUT MAN