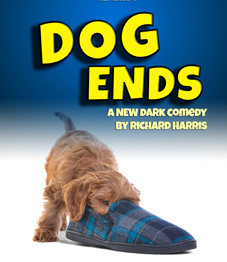 Entertainment is all. Or so the wild and free would soon tell us. And indeed, for most, entertainment is very much the meat on the bone for the housed. It is what we gnaw and chew on each night, after a day in the wild, sniffing, hunting as we scour the lanes for our pleasure and attend to ourselves with a lick. 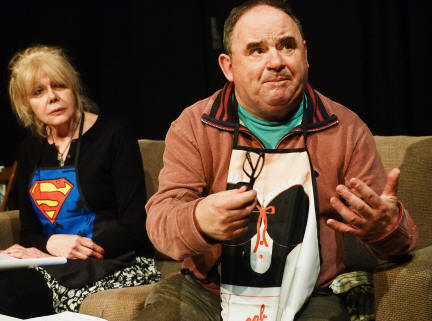 In the counter cultural context in which this review is written, this production of a very English treatment and treatise on the English attitude to death would seem an anathema. A cosy, Ackbournian, lower middle class setting, the requisite Christians at their Christmas of flattened ennui and pontoon. The slow, dying dog and death hungering granddad, each is a facet of the ‘shitcoms’ of the day. But soon things arise, like tiny trumpets of dischord. Odd words and phrases. Even stranger attitudes.  A lack of love becomes clear. The dog farts mid conversation. There is a sense of frustration. The old man, (as played by Bryan Hands) incontinents away on dry land. It is the English ‘englishing,’ as we might expect them to; stultifying. And yet something is happening, for in this play, despite all, there is a subversive idea to be cherished; the fact that death is a turn on for those in attendance. Death is food for those watching, as it helps to feed and fuel their distraction from the onset of their own.

Under this context of barely suppressed, surburban passive aggression, the protagonist, George, as played by TV’s Nick Wilton, yearns for the death of his father as he rots away in his chair. The old man underpins every facet of the living, with his growing confusion, chair shitting and the tangles and fuss the old leave. George’s long suffering wife, played with a charming sonambulance by Anita Graham, and son and daughter in law (a razor sharp Alex Mann and Chalotte Peak) accompany his one man chorus of disapproval with growing patronisation and updated iphone contemporisations, but George remains unsatisfied. The direction fails to the distinguish the level of George’s discontent and therefore loses some of the focus of this first act, which seems longer than it perhaps should in set up. This however, becomes deliberate as the second half is a quite different play; another unbalance which I believe works separately to its original intention.

Before we reach this point, George’s neighbour, Henry, played with both truth and soulfulness by Jeffrey Holland, appears in the aftermath of his own father’s death. For Henry, this loss is a liberation for him and his offstage wife, Marge, freeing them as it turns out, for a life of eternal cruises and holidays, the effect being that after the loss of the aged and infirm those at the onset of retirement achieve a last chance at renewal before their own deterioration. As I write that down, the resultant affect has more than a slice of Beckett attached to it.

Henry reveals that his father’s loss was tempered by the administrations of a specialist in the field of humane genocide and that George might find him useful. Played by acclaimed scion of English and American Theatre, TV and Hollywood film, Christien Anholt, the demonic vet soon appears. Bringing more than a dash of glamour and energy to the stilted proceedings, Anholt proceeds to introduce himself and his processes, inviting George to sign for the treatment that only he can supply. It is only when we realise that George is seeking peace and release for the dying dog, Rinty as a supplication for his frustrations with his father, that the complications begin.

By the end of Act One, the elements of English farce have been established. Act Two will see the constant moving of a corpse from Chair, to freezer, to garden to Recycling van and a growing arousal in the survivors for the heightened emotional states that the termination of one can leave in others. We are therefore encouraged to see the blandness of the setting as a paper thin cover for a wound that grows more visceral, the longer it is considered. From lines about ‘a boob job with free three months aftercare’ to reflections on the nature of the separation of the sexes and ‘the darknesses of the heart’, there is an attempt to show how the detachment we all feel in the face of death reveals our own inner psychosis and lack of empathy. If the tone in Act One is ruminative, in Act Two it is positively gleeful, with only the rather unlikeable George becoming more and more impassioned and affecting. Anholt’s Vet stalks proceedings like a handsome reaper, hidden behind distorting glasses and a tawdry beard, but showing through his wilful insistence that this is the way of all things.

Even the house music of – and I take some small delight here by using the words Max Bygraves in this context – attains usefulness as it is refered to as the old man’s favourite, so his deceasement shows us that with his death an entire generation and style has passed over into the wasteground of non reclamation, forever to be replaced by the need for efficient despatch.

There are very few great plays, but Richard Harris’ play does what a good play should; both hide and deliver its message, stealing its way into your subconsciousness, if it is clever enough. The great Harold Pinter, when pressed about what his plays actually meant, once revealed in a fit of irritation and humour that they were to do with the ‘weasel under the cocktail cabinet.’ He did this to appease the ignorant philistinism of many theatre goers and reviewers, who seized on the comment as if it were a tit in a pit of eunochs. In this play, the dark beast Pinter alluded to, does not possess the sleazy darkness of a rodent, but rather the black lethargy of an English Labrador. The dog dies not under a cabinet but by the side of an armchair, at the end  of the vet’s needle, his colour perhaps denoting the depression of his owners.

When Anholt  delivers this killing injection to dog and man, with all of the zest he can muster, we are led into a world of possibility that the second act attempts to convey. By containing our fears through  sometimes easy humour, the play shows how unable we are to deal with the one subject, perhaps the only real subject we, who do not deal in science fiction are obsessed by. The dog ends in death, but we are also the last trails and tatters. The last strands  of conscience snagging and caught on black breeze. That the play allow this says something for it, so to all of you close to Chiswick, I urge you to seize the Tabard. It is a charming Pub Theatre placed close to Turnham Green Station, on a charming street in West London with a cosmopolitan air. The ideal spot to consider the weakness within us, and to perhaps celebrate it, by prizing the moments we have left, as we can.

When Dogs approach death they go off alone and die nobly. This idea and production if considered more closely, places us in the silence, under which we all must sit, whimpering.