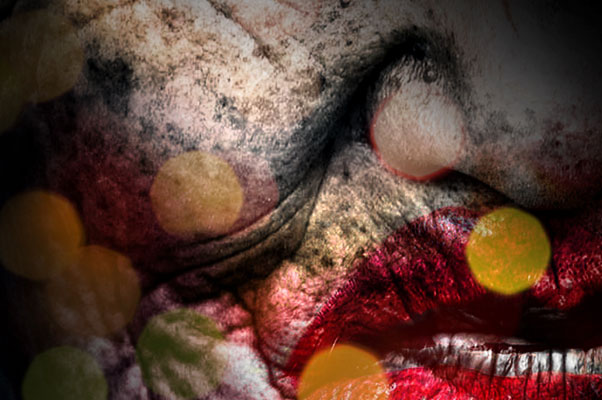 There she sits a rust pocket spinster
with twisted hip and crooked limp
her greying wisps of sick stringy hair
falling on weakened limbs -stick thin
her arms flop to one side like leafless twigs.
The red fire of death hissing through the trees
and the cruel lips of Autumn steal yet another breath.
There she is being sung to by a blossom -hued girl
her sun lit smile momentarily frees her from the
numbing beat of time.
And as the clock strikes she blinks
at the decaying stink of selfie- won stardom
a frenzied lust for riches and cunt
surrounds her.
Move in with those flattering film filters
hammy super grins of jammy youth –
as bloody froth pops rudely in a toddler’s throat
and Russian ballistic missiles and bottle bombs set Aleppo skies alight –
a gun powder symphony of sickening savagery
barrels dumped with shrapnel and gasoline –
a signature classic of the Assad Regime –
hot jets of human plasma detonate –
concentric body shock -flash burns –
spasms tear hands and legs and feet
they lie deep fried roasted stewed and boiled
human cuts of meat : upper thigh , heart, ribs, tender loin
carcass sweet : a prize -winning – photo opportunity.

Her home is now a brittle boned yesterday a boneyard of tears
and the lawyer Mister Weisman squats on the porch
the court rewarded him with her keys and the Deeds
for slow blood -letting usury- spawned by odious greed.
The wolf howls the night away and there are kinky dreams for sale
and silent voices ready to take a sledge hammer to this whole puppet show –
smoke screens will save the corporate bail out
and mobster pay offs
but the door is shut for simple truths
and angry palms remain outstretched for food .

A dry mouthed tomorrow awaits her
there’s no sign of an Asclepius wand
no hint of rebirth
just a pot of Earl Grey
and cough lozenges .
Her heroic eyes see through the lies.
She witnessed the killing of JFK
wept as the First Lady held onto half his brain
watched the bombs drop again and again
and cheered at the fall of the Berlin Wall.
She came from a different time
when women were sold with flocks of sheep
now they set their own price
but the highest bidder is still Mister Clean.
Is she any closer to the bridge ?
Cracked atoms find no peace
her candy apple flush
withered by time
bruised- now -liverwurst brown .
After Mary Magdalena Boadicea and Joan of Arc
after finding a room with a view with Virginia Woolf
and naked compassion with Sojourner Truth
she was the mini – skirted grin of ‘The Summer of Love,’
but still judgmental fingers point from above
Triggers aimed at Muslim burqas and policing bikinis on
French beaches sacré bleu !
G -string emancipation is a soft sell and Birkenstocks and bra burning
didn’t keep the world from turning -The Beatles played on .

She waits in silver shadows
under the dish cloth of an unknown charwoman
there’s no Eureka moment no noble recognition
just the crown of sacrifice and blistered knees
broken dream -back breaking -floor cleaning –
as she scrubs away the dawn the dirty truth revealed:
Dissenting tongues sing loudest
but the prison walls remain.

View all posts by Saira →
This entry was posted on 5 January, 2017 in homepage. Bookmark the permalink.