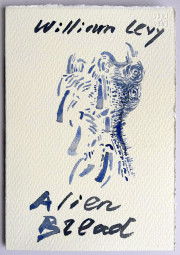 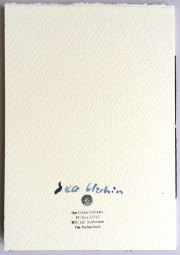 William Levy (Baltimore, 1939) attended the University of Maryland and Temple University and taught in the literature department at Shippensburg State College, Pennsylvania, during which period he co-founded the Insect Trust Gazette, a poetry magazine which – among others – published William Burroughs. Levy developed into a spearhead of the European underground soon after he had left the US in 1966. As chief-editor of the underground magazine ‘International Times’ and the first European sex paper Suck, Levy found himself refused entry to England as a “thoroughly undesirable character” and a“dealer in pornography” in 1970. After having been detained in England for a week, Levy was given the choice of either going to Holland or being sent to an English prison. Levy chose the former and settled in Amsterdam, where he has lived since.

As side projects of Suck magazine Levy co-organised the Amsterdam Wet Dreams Film Festivals of 1970 and 1971 and published the transgender photo novel ‘The Virgin Sperm Dancer’ in 1972. Together with John Michell, Levy edited the subversive ‘Souvenir Programme for the Official Lynching of Michael Abdul Malik’ two years before Malik (better known as ‘Michael X’) was hanged in Trinidad in 1975. The same year that Michael X was executed, Levy edited Ezra Pound’s controversial WW II radio speeches for Cold Turkey Press. And in 1981 Ins & Outs Press published Levy’s ‘Natural Jewboy‘, a collection of prose and verse illustrated by Peter Pontiac. Levy has championed Otto Muehl from the early 1970s and has written several leading publications on this uncompromising artist. Until recently his alter ego Dr Doo Wop broadcast weekly music programmes on local radio and to this day Levy has been the Ambassador to Amsterdam for the utopian Independent Republic of Uzupis and the publisher of the ‘Transactions of the Invisible Language’ series.

Alien Bread was written in November 2015 and sees its first publication as a Sea Urchin chapbook. The poem is set in an apartment on Puerto de Mogán, Gran Canaria, a ‘cocoon of self-banishment’ above the Paradise tattoo & Bar on Avenida de las Artes. From the balcony of this place of exile Levy observes the touristy world below: ‘a carload of teenage sluts unloads under swaying palm trees’, there’s karaoke and ‘a beach full of el pavo pechuga (= turkey breast)’ and there’s the eternal ‘flip-flop of waves’ at night. In Levy’s descriptions of this garish world there’s a strong sense of detachment, not to say alienation, which is reminiscent of some of Albert Camus’ finest diary entries. But also contained in the sober and clear descriptions there is, like in Camus writings, the desire to bridge the distance, to lift the exile and break free from the ‘cocoon of self-banishment’. Aware of Wallace Stevens’ ‘Thirteen Ways of Looking at a Blackbird’ written almost a century earlier, Levy reaches out to a blackbird, ‘singing perched on a satellite dish’, in an effort to unify the world: ‘…That’s why I always carry a flute / In case I come across a blackbird that digs duets…’

Alien Bread is a sublime existentialist poem which, once printed, spreads out in a gently undulating shape on the page. The poem is met – both in contents and shape – by an illustration by Ben Schot that can be viewed from different angles. Alien Bread is manna from dark heavens. Tweet
This entry was posted on 17 March, 2016 in homepage. Bookmark the permalink.