Young as Trees Begin [an extract]

This poem of young trees battling for survival and upper fellside revival is based on research done on Young Wood (on Bowscale Fell near Mungrisedale in the Lake District, UK). This ‘awkward remnant of shrubby sessile oak’ is thought to be the highest Atlantic-period semi-natural ancient oakwood in England. It has never appeared on any map old or new and was assumed to be a sporadic colonising by oak, gorse, bilberry and crowberry on south-facing slopes and rocky outcrops. A large area around it was fenced in 2008 (my double backslash divisions perhaps echo this) to see to what extent this type of woodland can spontaneously re-establish and expand in an area now free of sheep-grazing. 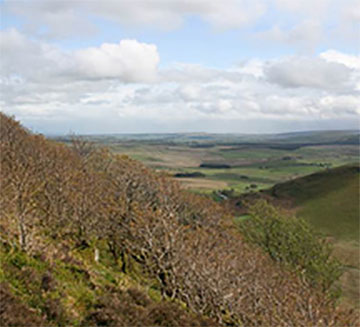 Rudimentary accession of trees \\ how can such stalled youth fit the land? \\ in such sticks butting it?

Not strutting across terrain but implanting its pick of arrival struts, their risings in green slur

High altitude, low-growth set at wind-sweep, youth of it beyond the edge of tree connectives

Awkward remnant of shrubby sessile oak \\ this unprevented wood, itself a ground habit undiminished at grub-hedging to miniscule provenience

A patchwork of stubs in cropped grass at their sticking point (travestied youth), become the thatchwork of clothing a sill

A fate of trees beyond a wood but so young in speculative pitchings, will not be isolates, consoling what there is for gusts to stroke

Kiddish ankle-cramps, jejune in tangle but a common testimonial \\ a triangle of corners recessioning (buttressing) shelter

Nothing like the age of earth, so young in flurries of delay-limb, of the same era as transitioning dust

Naked unraked ground prematurely slaked, these child trees must be earlier than every other resistance \\ leavings (callow-remote) of natural woodland

Too young to the infill, juvenile flickers crouch vertically, hold to loose couch

Starved for a maturity they don’t yet get, will fill their adolescence with figures of arboreal rebound

How earth lives off them by being raised one degree, this is an offground razing chivvied alive to exact leaf-shape
Here below nothing near fell-summit, already a taller horizon acts up its leaf-shadow stairs, swabbed verticals purer at each stunt

Tots of tree at a mildness of ground-touch (susceptible cauls of soil) instantly revisit what is tottering \\ sway now is all verticals ahead, infancy of beginner generational (inferential) bedding

Puny as they are to begin here these tree-quips are sprung to a major defence \\ can such juvenilia be local seed or the import-crust off some elect conservation shield?

Brinks to beget connotation, counter-attract trails of grit around currents of stem

Unfavourable recovering creeps to the living stores of its non-repair, lisping in succulent leaf

Fragment of Atlantic oak impoverished but wholly scouring (seed-mapping) its beginnings, any quittings will undershoot their residue

Impertinent whorls of greenery, the intrusion that this belongs where it can will only just reckon the effort, organs of curtain effect

Altitude won’t shrink except at granule cracks for a seed even smaller, pioneer trances (rinses) of grass

Skip any sparking between trees too young for the embers of full grant, can only dance their untaught going-at

At all drop it’s a matter of trapped stealth, where an acorn trips the wind’s sloping this is a reset \\ young in strands of reseaming the cessations

Or is a re-missive scantness, a message of clinging the slope sent to plenary summit \\ a desert until it comes to fetch how trees serve it a fore-habitat they never reach

Trying to crystallise the rim of a semi-ridge, at crouching light where shade begins dimmer

Struggling to be unfree in a loam of its own, future tree pines for its size-beginner in diminished adult, the youth-resin still at full tilt

Bold tatters of rubbed-down wood, batterings are the wizened shape of youthful forms in sole profile

A share of incoming weather co-habiting the one given ledge to score leaves, nestles the common scope

Prayer no longer steep where it commends the cramp \\ a young tree knows this as ascension pressure in itself, stripling verticals were never overdue this height

Tweet
This entry was posted on 21 August, 2021 in homepage and tagged Peter Larkin. Bookmark the permalink.