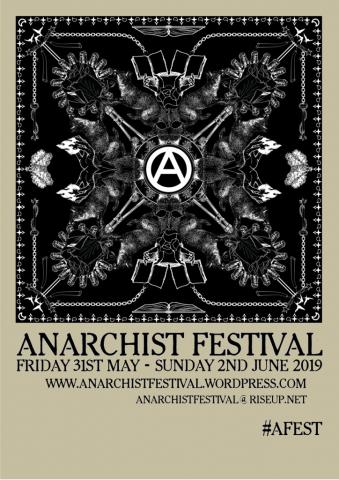 Following the success of last year’s weekend of decentralised anarchist happenings, the Anarchist Festival is back this year, this time aiming to host events scheduled across the country.

The Anarchist Festival is based on the simple idea: groups put on their own programme of anarchist events, concentrating on the dates of the long weekend of 31st May to the 2nd June 2019, and the programme is collated by the festival on their website and social media.

Below are some of the events confirmed so far. Please note that some ask for RSVP. Full lists are up on the event website and Facebook events page.

And, once you are planning your next weeks’ radical workshops and events schedule, you may also want to note that between 15th and 22nd June London will see the return of Antiuniversity: a ‘collaborative experiment to reimagine the 1968 Antiuniversity of London in an programme of of free and inclusive self-organised radical learning and mutual education events’.

A panel discussion on the continuous role of the anarchist imagination as muse, provocateur, goading adversary, and catalyst in the stimulation of research and creative activity in the humanities and social sciences, including anthropology, art, feminism, geography, international relations, political science, postcolonialism, and sociology.

Our panel discuss the continuous role of the anarchist imagination as muse, provocateur, goading adversary, and catalyst in the stimulation of research and creative activity in the humanities and social sciences, including anthropology, art, feminism, geography, international relations, political science, postcolonialism, and sociology.

At the event two books will be launched:
The Anarchist Imagination
Anarchism Encounters the Humanities and the Social Sciences, 1st Edition
Edited by Carl Levy, Saul Newman
https://www.routledge.com/The-Anarchist-Imagination-Anarchism-Encounters…

Carl Levy is a Professor of Politics in the Department of Politics and International Relations, Goldsmiths, University of London. He is currently writing two books, ‘Anarchists and the City’ and a biography of Errico Malatesta: ‘Errico Malatesta: The Rooted Cosmopolitan, the Life and Times of an Anarchist in Exile’.

Constance Bantman is Senior Lecturer in French and Director of Teaching and Learning and author of ‘The French Anarchists in London, 1880-1914: Exile and Transnationalism in the First Globalisation’

Ole Birk Laursen is a literary critic and historian of Black and South Asian people in Britain and Europe, researching and writing about race, resistance, and revolution, focusing particularly on Indian anticolonialism, nationalism, and anarchism, as well as the contemporary legacies of colonialism, racism, riots, and human rights.

Carne Ross is best known for once working as a British diplomat before leaving the civil service in disgust over the Iraq war, and testifying against the government at the Butler Review. He has gone on to become an advocate for anarchist organising

Anarcho Agony Aunts is a sex and dating advice show, covered from a feminist, antifascist, anarchist perspective. Hosts Rowan and Marijam are reclaiming space from the alt-right in giving people (mostly men) a space to ask tricky questions in a judgment-free zone. The session will include a live taping of the Anarcho Agony Aunts, with people being able to submit their burning questions before the show.

On a rare visit to London from Mississippi, a co-founder and co-director of Cooperation Jackson, Kali Akuno, will discuss the inspiring work they have been undertaking to create sustainable community development, economic democracy, and community ownership, within the confines of a historically structurally racist state.

To take seriously the desire for destroying the prison society, we need to find new ways of holding ourselves and others accountable for our actions and inactions. This panel discussion will be followed by a workshop in search of practical steps we can take.

FairCoop is an international cooperative movement that has adopted FairCoin as a radical ecological and social currency outside of the capitalist banking system. FairCoop is a visionary project founded on anarchist principles and operates at both local and global levels. In this session, we will hear from different participants in the FairCoop ecosystem across Europe who use FairCoin, and discuss the goal of building a cooperative ecosystem as an alternative to capitalist fiat currency and the state.

Bad landlords, poor housing conditions, crappy student lets, bedroom tax, sky-high rents, discrimination. The list of problems in the rental sector is endless, but what’s to be done? Come and chat about your experiences and opportunities for fighting back!

Housing Action: What Works? A talk on radical resistance by Brighton Solfed

Save the community’, ‘Support from the community’, ‘The community thinks’, ‘Community Land Trust’ are just a few of the references to ‘community’ that we us when are involved in a range of struggles such as housing, saving a library or getting access to land. However, to what extent does this ‘community’ exist? In this meeting, drawing on many practical examples of organising, we will discuss problems such as the impact of capitalism and divisions within localities. We will then hope to discuss how we can create genuine communities based on working class struggle. This event is organised by London Anarchist Communist Group.

Talks and film screenings focused on the current situation of Indonesian DIY collectives, and their actions in Indonesia, mainly on Java and Bali.

Members of the London Anarchist Federation will discuss anarchism as a political philosophy, its history, key thinkers and modern currents as well as an anarchist FAQ. This talk is aimed at those interested in learning more about anarchism and will also include an overview of the many anarchist groups you can get involved with.

Want to investigate a company but don’t know where to start? Come along to this practical workshop led by Corporate Watch

A launch of the Mycellium Collective’s Words End, a comic aiming to help people understand climate change and capitalism, and tackling the huge, complex challenges they pose. The event will feature a discussion on the radical politics in eivoronmental activism in the context of the recent explosion of Extinction Rebellion and Climate Strike.

This workshop will talk about the law on covering your face, discuss creative ways of hiding your identity that moves beyond the traditional black bloc aesthetic, and interrogate popular assumptions around the act of wearing a mask.

Screening of Subvertisers for London – a film about subvertising in London by Dog Section Press (21mins).

Join the Antiuniversity Now co-organisers crew for a collective exercise in making sense of radical language, where we will identify contested terms and work together to examine, clarify, reference and demonstrate what we mean when we use them. At the end of the session we will have the beginning of a glossary of movement terminology, to be continued and expanded on. Bring a word you want to define or pick one up from our list.

A profile of anarchist and bank-robber Salvador Puig Antich, the last person to be executed by garrot in Spain, in 1974 under the dictatorship of Francisco Franco.

The LARC Film Club is a sober, smoke-free space.

Please respect that and only attend if you are willing to follow this condition.

Write for your local anarchist rag?

Time to start a blog talking about your local politics?

Need to skill up to make a better stream?

Join speakers from Libcom, Freedom Press, SchNEWS and the Anarchist Federation to develop your skills and make links with anarchist media outlets. Alongside training sessions covering writing, the law, video production and much more will be talks from special guests including Ian Bone and leading anarchist YouTuber Emerican Johnson (NonCompete).

As publishers and anarchists we aim to develop our collective skillset to better share our politics and provide commentary on the fast-moving events happening around us.

This event is inclusive of all gender expressions, sexual identities, creeds and a general safer space policy will be upheld.

Please note:- The building MayDay rooms is housed in was built in 1902 and, due to the physical constraints of the building, has limited access. It is compliant with ‘ambulant disabled’ and provision for broader access is currently under review.

The Next Revolution Reading Group (NRRG), which started at last years Anarchist Festival, is co-hosting this event with the Education working group of the Kurdistan Solidarity Network (KSN). The event will feature an introduction to the Kurdish Freedom Movement and the inspirational feminist and ecological revolution in Rojava, as well as screening of a short video (23 mins) on what is happening on the ground with the radical democracy in action in Rojava, followed by discussion and info session on NRRG and the collective’s reading/discussion process.

This training workshop covers the following key areas: • UC in the context of the broader social security structure • Similarities & differences in claimant conditionality between UC & the system it replaces • Types of conditionality under UC & how different groups – such as single parents, disabled people, carers, migrants & low paid workers – are affected • Relevance of the UC ‘claimant commitment’ • Practical resistance to UC conditionality & compliance • Sanctions under UC & how to effectively challenge these • Strategies for dealing with common tactics used by the DWP to enforce the UC system. It also gives participants the chance to discuss/ask questions and empower themselves practically against UC and its inherent injustices.

A viewing and discussion of Zeitgeist: Moving Forward: a documentary on the issue of sustainability of our market-driven society and proposals for moving forward.

This event, organised by Green Anti-Capitalist Front (GAF), will bring together speakers from Anarchist Federation, All African Women’s Group (AAWG), the Kurdish Freedom Movement, and also speakers talking security culture & the police (& getting arrested), and speakers talking about fossil fuel extraction and the resistance against it (including anti-fracking), all in relation to green anti-capitalist resistance.

CWWDB and SnC will be chatting about how trans liberation and the Gender Recognition Act connect so strongly with the class struggle and how the both groups are natural allies in fighting the TERF war.

Tweet
This entry was posted on 25 May, 2019 in homepage. Bookmark the permalink.

One Response to Anarchist Festival 2019