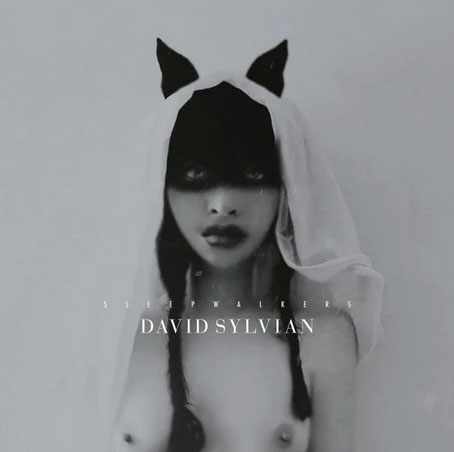 Sleepwalkers is a sometimes-overlooked release in David Sylvian’s catalogue, perhaps due to its compilation status rather than a regular album. I’ve always regretted this, having listened to and enjoyed Sleepwalkers as much as Sylvian’s notable ‘solo’ albums from the same period, Blemish (2003) and Manafon (2009).

Originally released in 2010 on Sylvian’s own Samadhi Sound label, and now reissued in a revised and remastered form on Grönland Records, Sleepwalkers collects a wide range of Sylvian’s musical and/or lyrical collaborations, including tracks which appeared on albums by Steve Jansen, Nine Horses, Ryuichi Sakamoto, Arve Henriksen and Christian Fennesz, and including some as alternate or remixed versions.

Sleepwalkers sits well in the context of Blemish and Manafon — there are many shared concerns, and some shared musicians, but Sleepwalkers is arguably the most accessible of the three given the way melodic songwriting is foregrounded across much of the collection.

That said, the songwriting is often complex and exploratory, and some of the arrangements are free-form or abstract with the sense of song singularly driven by Sylvian’s melodic vocals. There are also songs with left-field elements (for example, percussive or textural left-turns) and the collection also includes some more challenging fare — for example, two spoken-word tracks, and ‘Five Lines’, with music by Sylvian and Dai Fujikuru for string quartet.

Given this wide-ranging set of contexts, line-ups and approaches, Sleepwalkers stands out as a very effective and pleasing collection in its own right. Indeed, all of Sylvian’s work across the first decade of the 2000s suggests a powerful through-line of directness and honesty. The bulk of his work across that period feels direct-to-tape: the recordings mostly feel like they directly capture the musicians’ performances.

Sylvian’s lyrics and delivery are central to that directness: stripped back, raw and emotive, they feel personally incisive. There is anxiety, anger and pain, with attempts to process and understand those feelings — I feel like I’m being spoken to directly, the spoken and sung voice clearly and consistently voicing.

The title track opens with:

‘Work the handle’ and ‘smear and turn’ are representative examples of Sylvian’s lyrical strategies, poetically revealing through simple or direct images. The vocal delivery then elevates this further.

Of Sleepwalkers, Sylvian in 2010 said  ‘these are the orphans, abused, estranged, exotic, migrating from diverse corners of the globe, brought together under one roof which they’re learning to share despite their differences. we contain multitudes. we’re nothing if not contradictory.’ That statement nicely encapsulates the collection: these pieces do sit next to each other, in places rubbing up against each other through their differences, but underneath which there is a shared sensibility.

This was a phase of Sylvian’s work where (for me, as a listener at a distance) it felt that running his own label seemed to have created fertile conditions for artistic freedom — that’s feels like it’s reflected across the diversity of material on Sleepwalkers, as well as the more stripped back and exposed work on Blemish and Manafon.

Why reissue and why remaster, and why now? I’m not always clear what drives those decisions — demand for the first vinyl edition may be a factor.

And why change the track listing slightly? Three pieces have been added: ‘Do you know me now?’ (its first time on CD, an acoustic-led ballad), ‘Modern Interiors’ (previously download-only, a plaintive and quite beautiful track) and ‘World Citizen’ (complementing the other version of the song also included — ‘World Citizen: I won’t be disappointed’ — the additional track is perhaps the most conventionally arranged and produced piece on the new release).

Two tracks from the first edition of the compilation are also sadly excluded, ‘Ballad of a Deadman’ and ‘Playground Martyrs’ — both originally from Steve Jansen’s album Slope.

If you have Sleepwalkers already there may not be not a great incentive to buying it again (unless you’re eager for the newly-added tracks); the original mastering felt fine, and I’m not sensing a radical overhaul of how the music sounds. But if you don’t have Sleepwalkers in your collection, I strongly urge you to pick this up. And if you already have it, it’s a great album to return to.