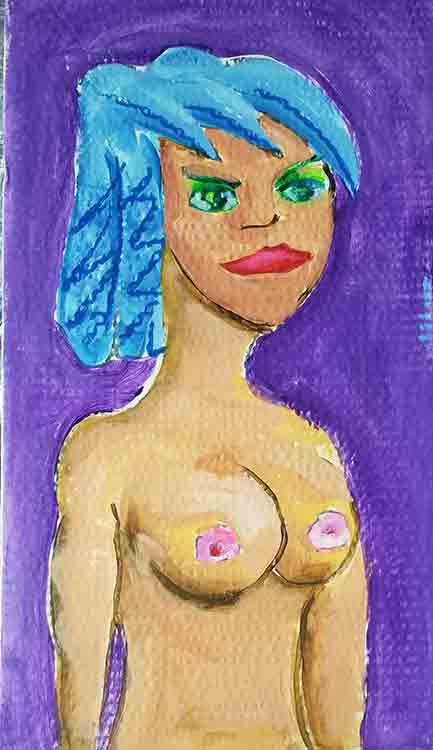 ‘Wiesel and the White Boys, Cooled’

An appreciaton on the stories of Saira Viola

Like the sound of the instrument in her name,

Her sound traps the darkness hidden within

As with this tale of sex streamed

Heroines glitzed and guttered; her protagonistas

Fuck and struggle,achieving glory though pussy

And seeking their sinewed rewards with a knife.

Or with a broken bottle, as here, you will hear

The rage and roar deep within her:

Viola’s guys and goirls trounce each other,

They spark and jazz on spunked thrones.

Each one a star’s opponent, while stained

By the glittered lust sent to frame them,

Such as this middle aged fool, who, over eager

Parodies through my subtitle the gore and the graces

Of the beautiful Rickie Lee Jones.

Her song from PIRATES resounds through Saira’s

And yet in that seed and seep, flowers grow,

Some may have blood on the stem, or have buds

Pre-cummed while they’re growing, but each one

Give you hard-ons as each word set truly knows

That baseness in you, you dirty dog, bound by Kiki;

She’s the heroine here. Get her habit

And you will want to in some way overdose.

For this is punk pop noir,in which Bogart meets

By taking descent down and then up, though the nose.

And yet Saira’s fictions distort.

Here she is, then, a Beatnik,

A low swung smile on her heart shaped face. Half-naked- topless in bordello -red panties. Her left leg slung at a ninety-degree angle across a black scrunched cocktail dress. Her right leg straddled the arm of an easy- fit budget sofa upholstered in an aggressive shade of convict orange. On the floor beside her, an open tub of vaginal jelly three fingers of blow and a dinky gold-plated cocaine spoon. It was noon. The sun vomiting diluted rays of insipid light into the room. A slit of dust on the coffee table and a shit- strewn kitty litter box sat by the back wall. It stunk of broken promises. Kiki Loveheart aka Mizz WhipKink aka Maddie Summers aka Sweet Cheeks 69. Kreative Gig artiste and professional cat sitter. Eking out a piece meal existence as: Daytime nurse -afternoon phone sex operator -night crawling glamour queen and private stripper.

Forced to juggle four jobs just to live in a cramped foul- smelling roach -ridden walk up. She Stared ruefully at her purple lizard leather stilettos. She felt like a Penthouse pin up in those heels. They elongated her calf muscles popped her pelvis and kinked her hips. Strutting the sidewalk never felt so good. Kiki blinked, yawned and slowly got up. Barefoot. She tip toed to the refrigerator and took out a cold bottle of sparkling San Pellegrino and rolled it against her forehead.

A goopy taffy- laced little voice. It could have belonged to a third grader or a whiny half -bagged grandma but it belonged to Michael Wiesel. A squiffy- eyed Buddha -faced eight- toed high- talking sex perv. Serial fraudster, bourgeois rapist and TV Judge. Presiding over his own prime time TV show, that pitted litigants in person against one another. Miserable little suburban dramas. Scripted for mass consumption. Of course, it was a ratings winner and Wiesel wore his success like an electric lit billboard. His patterned argyle socks vintage Rolex, silk -satin tux and two-ply cotton designer shirt screamed smug money. But his ageing blond- comb over pomaded across his jutting forehead – swollen bucket -gut and peeling- pink -skin humbled him on occasions especially at funerals, country clubs, and IRS meetings.

‘Keeeeeki. C’meer. I want chou to freshen up. Put on a dress or somethin’ pretty. You look like a syphilitic ghetto slut. Clean yaw self-up. Dirty bitch.’

His accent pure New Yawk. Purple gums on show. He threw a couple of c notes on the floor and flashed his platinum- circled pinkie. His loose -lipped pig mouth slapped her butt with another slew of insults: ‘You need a tan – lose a few pounds – I like your hair straight – classy chicks wear perfume – get bigger tits.’

Twenty-Eight years old and still listening to fruitless fuck balls who reminded her that she was just a split-second vignette in THE BIG PICTURE. She switched her gaze between a moldy slice of Kraft deli -deluxe and Wiesel’s spreading bald spot. Swirling her tongue around her index finger she whispered. ‘Got a better idea.’

‘Hmmmm. Why don’t I text Nahhhtashhha? And we mix it up.’ Natashaar: Twentyish. Nouveau redhead. Faux Russian accent big bazookas- shapely ass -creamy lips. Sweeter than Nutella and Kiki’s bestie. The pair of them responsible for a rash of tricks that would make even the hardest hustler blush.

‘Whaddya have in mind?’

‘Okayyyyy. Make yourself more comfortable. Take off your pants.’

Kiki grabbed her phone from the dresser. Natasha would be there in a few minutes. Wiesel was caught between the bastard of time and his own carnal greed. He paced the floor like a restless tiger. ‘Hurry up.

She patted the seat with a fiendish glint in her eye. Then slid on thigh -scraper black velvet boots- and a black leather string bikini. Wiesel’s creeper peepers fixed on her downy v shape mound peeping through the slit of her gusset.

‘I said you know you make me so hot for it.’

The creases on Wiesel’s face were lined with dust and type 2 diabetic sweat.

Squatting on a throne of debt. Kiki was tired of sleazo tricksters. Tired of renting herself out to small- souled roly poly hardballs. Tired of one bowl -easy mac frozen dinners- three-minute hustles with teenage dopers and cheapo plastic heart break. Her brain backed up with years of toxic yesterdays. Ever since her only sister had succumbed to cancer. She felt trapped in a psycho blizzard. She wanted out. Wiesel. He was the catalyst. Sprawled there. On her green linoleum five-dollar armchair. Balancing papers on his balloon shaped stomach. Tapping his foot to an invisible beat. Kiki stiffened. The double thump of her heart jumped three seconds. She had a driving primal urge to glass him in the neck, and played every move slowly, in the dungeon of her mind. Psych out!

It wasn’t the most original way to kill someone, but it was definitely doable. It made her body tingle. She knew that Wiesel kept at least 10 grand in his grab bag. A pre -packed emergency kit stocked with doomsday end of the world shit. Wiesel carried it everywhere he went. Bragging to anyone who’d listen that he was ready for Armageddon. It was the perfect get away bag. Ideal for two huzzies on the lam. Kiki’s murder plan simmering in the cauldron of her mind. Something gross and a little immoral was about to happen.

Kiki buzzed her up. Wiesel moistened his mouth and moved to the bed. Panting his fairy tale sex romp through Pepto bismol coughs. Natasha bounced into view. ‘Well hellllloooo! How ya doing?’

Rude -cute in a stylized red plaid mini. Cropped shirt- white gartered knee highs a striped tie with pigtailed hair and cheap mary jane shoes. She slow -kissed Kiki and cupped her face in her hands. Wiesel unbuttoned his shirt, revealing an expanse of silver and brown gorilla chest hair and a thatch of wispy fuzz that sprung from the nape of his neck. He stank of onions and tuxedoed fraud. Tracking the curves of Kiki’s thighs, he said ‘You know what I love about your type?’

Natasha pulled away grinning. ‘Our type?’

He ignored the sarcastic inflexion in her voice and sucked his teeth. ‘You understand that sex is just a business. I don’t have to think too hard. I fuck you. Pay you: You’re mine.’

His mildew eyes clung to her ass. She had to dig her nails in her palms to stop herself from puking in his lap. In a bitter- sweet tone part Marilyn Monroe part Morticia Adams she whispered: ‘Let’s try something new.’

A dangerous smile curled her lips. Together they cuffed Wiesel to the bed. Kiki placed a blindfold on his eyes.

Kiki and Natasha shared a knowing wink. Natasha banged her hips in Wiesel’s face. Toying with him while Kiki got busy.

‘You think you know our type? Think again!’

She gagged him with a pair of sheer stockings. Deaf to his protestations. The gentle curve of her mouth promised more pain. Natasha bound his ankles with uber kinky bondage tape and leather restraints.

Kiki steamed. ‘It’s you and your type. You’re the limp dick asshole who’s got your greedy cheating hands all over the city. Everybody knows you’re as crooked as hell. We’re the only ones hurtin.’

Kiki marched into the kitchenette. Smashed the San Pellegrino bottle against the wall stomped back to the bedroom and ignored the little yelps, and spittle, dribbling down Wiesel’s chin. He was thrashing around like a bottom -trawled fish gasping for air. Kiki gripped the base of the bottle jabbed it into his neck, and Sliced open his throat, hitting both carotid arteries and his jugular.

They racked up the balance of the coke Kiki armed with the grab bag. ‘C’mon let’s get outta here.’

A few moments of thin silence. Kiki’s voice strangely alien eaten by the shadows in the room:

‘Ghetto sluts like me, always end up vertical not horizontal.’

View all posts by Saira →
This entry was posted on 2 May, 2020 in homepage and tagged David Erdos, EnDo, Saira Viola. Bookmark the permalink.