Voices from a sleepy hollow Cow Shed in Lancashire 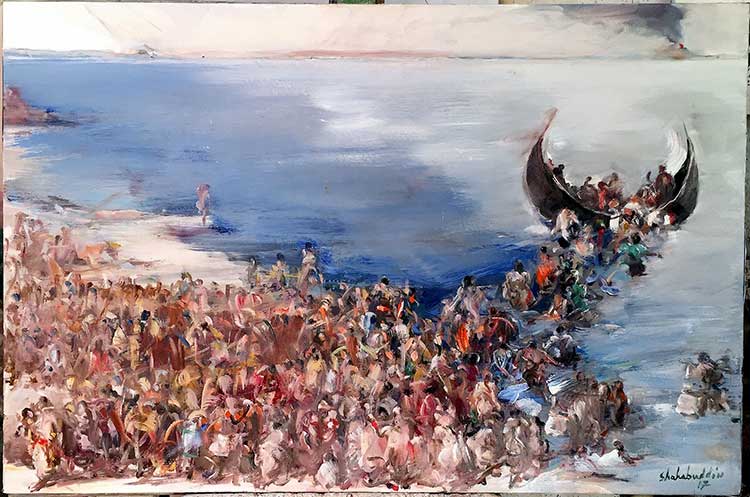 Today, more than some 40 years after
why do I remember, so vividly
the harrowing site of some 165 bullet ridden Bengali policemen immaculately dressed in their khaki uniforms
At 1875s built Mitford hospital morgue
on 27 March’s early morning, soon after the curfew break in Dacca,
Massacred by the Pakistan Military Junta

Why my teenage memories of those invisible
100s of raped Bengali women, in white sarees
Inflicts me so much of pain?
Memories, only to be heightened by the
Blue and white abstract painting of freedom fighter Shahabuddin
Whose paint brushes agonises in pain
his 40 years long exile in Paris in despair
As I plan to retire from my exiled 37 years in Inlan

And now after 40 years
why does those harrowing tales, the plights of
I million Rohingya refugees
Engulf me with extreme sadness, despair and anger?
It all started building up with the tragic departure
of my beloved wife Yasmin in the summer of 2016
in the sleepy hollow of Lancashire

But then again, my distant memories of
Joy Bangla, liberation of Bangladesh 1971
Brings me immense comfort and lots of positive energy!

In my teenage, I still remember the distant crackling noise of our
lather cased Phillip transistor radio’s of BBC’s feeble broadcast of
Joan Baez, Ravi Shankar, Ali Akbar Khan and George Harrison’s
Emotive songs, ragas and music from the concert in New York 1971

‘Bangladesh, Bangladesh
When the sun sinks in the West
Die a million people in Bangladesh’

‘Bangladesh, Bangladesh
Where so many people dying fast
And it sure looks like a mess
I’ve never seen such distress’

Even within years of my temporary stay in Inlan
I see in TV, the man made famine in Ethiopia
And I get overwhelmed with Joy to find
‘emotions taken out from public to private sector’ in
Bob Geldof’s Live Aid 1985 in London
The eerie footage of Korem, Ehiopia 1985
which Michael Buerk’s reported as like Biblical famine
costing lives of 1 million people, chillingly shown in the Cars Drive

And I remember in Liverpool,
where even the un-employeds
Sending pounds to Live Aid Appeal
Making a staggering 42 million pounds one joint concert
In Wimbley and Philadelphia

I fast forward 33 years on from Live Aid
And incomes the Rohingyas, as Jessica questions
‘Who are the New Boat People?’
The most persecuted refugees of the present
The Rohingyas

A million driven away from their homeland in Rakhine province
In Myanmar to Bangladesh
An unthinkable, incomprehensible atrocities
of killing fields, Torture and Rape

fleeing Burma (now Myanmar) through
Mountains, Seas, Rivers and Canals
Landing the good old sandy beach of the British empire of
Cox’s Bazar to meet the mighty Bay of Bengal

A million jostling in the world’s largest makeshift refugee camps in
Balukhali, Kutupalong and hundreds of such clusters in Ukihya
Even the UN says that they haven’t seen such a catastrophic massacre and demands a trial for Myanmar Military Junta

And then there is such a hypocrisy of the so called the
Champion of the Oppressed, the Nobel prize winner
Aung San Suu Kyi
Silently gazing the gang rapes,
tortures and the killings of children and men of innocence
of Rohingya community

As this Political Black, Muslim, Mediocre, Provincial, British Academic
plans for an Engxit
before Brexit
because Inland is a Bitch

My heart bleeds as to why there are no
Joan Baez, Ravi Shankar, George Harrison, Bob Geldof or Bono to
salvage those miserable displaces, traumatized and raped Rohingyas
seems eternally trapped in the isolated southern district of Bangladesh

But then, I now see a glimmer of hope
A sliver line in Lancashire overcast skies
Where photojournalist Fojit Babu, captures the miseries of
The plights of Rohingya refugees to vividly and brings them
To here in Ormskirk Lancashire for the Festival of Ideas in June 2018
When staff students and friends in Bangladesh and England combine
Their efforts to make short documentaries with Amman doing
Rapid editing

‘Amay bhshaili re, amay dubaili re
Akul doriar bujhi kul nai re’
You submerge me now, then set me afloat
Boundless river, you seem to have no border

While my human geography students keep on playing his piano during the intervals of this show and where
Kieren, Eden, Sam or Jessica re-assemble every time there is a
Meet for Rohingyas, who entice me to defer my retirement date by
At least six months to this Christmas of 2018

What can I say?
I now feel upbeat
We will continue this campaign to raise the awareness of the Rohingyas
Globally

Tweet
This entry was posted on 8 December, 2018 in homepage and tagged Rohingya refugees, Shahabuddin, Taz Shakur. Bookmark the permalink.

2 Responses to Anger despair and hope?