Posted on 2 October, 2021 by Andrew Darlington 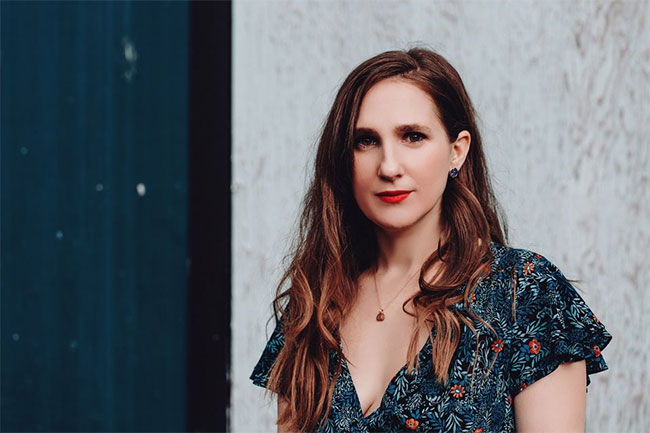 There are firefly fairy-lights draped at the window. Annie sips from a glass, shucks her long dark hair aside, and retunes her guitar. Husband Paul Goodwin monitors the sound as she opens with “Nyack” from current album ‘Coffee At The Corner Bar’. Yes, I had to Google it too, Nyack is the New York State village where she grew up. There’s a rural Perry Hastings video elsewhere online to illuminate this song of memories and reflections ‘about my childhood and my brother’, with the heartfelt pledge ‘ain’t nothing’ll break us, ain’t nothing gonna tear us apart.’

‘I really miss New York’ admits Annie, who now lives in Cambridge. ‘My first album was done in NYC. I moved shortly after that. I’ve lived here in the UK for nine-&-a-half years. My husband is British. He produced ‘Coffee At The Corner Bar’. We recorded it in our house with him in the office/music room and me in the laundry area. It will be a long time since I’ve been home. I miss my Dad and I wish my kid could go see him. I’ve not been home in a year-and-a-half. I’m so homesick.’

We live in strange days. But it’s a great time for girls with guitars. For intimate journal-entry songs. The age of huge stadium-Rock has gone forever. Music is a more personal ear-bud one-to-one experience. Ideal for poetic lyrical songs. Ideal for online livestreams.

‘Well, hopefully now is my time then!’ she quips. 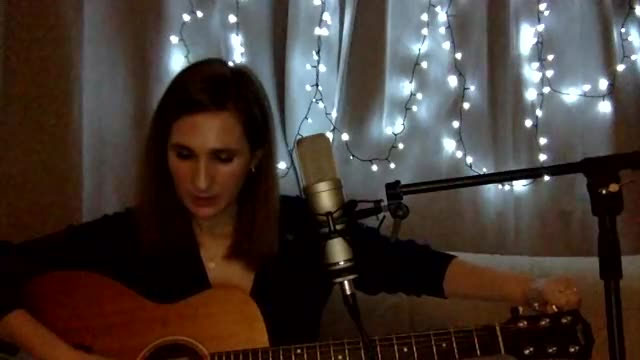 Now she goes all the way back to the title-song from her debut album ‘Strangers Who Knew Each Other’s Names’ (May 2010)  – ‘it’s ten years since it first came out,’ now she’s considering maybe a vinyl edition? It’s a song about an instant rapport with a stranger, done in a conversational lyric-style, with the hanging ‘didn’t you?’ hook. From the same album, “Fly” – written in her New York apartment, was picked up for the soundtrack of ‘Drive Me To The End’ (2020), an uneasy car-share Amazon movie. “Find Me” has a more electric Indie-band sound, the Leonard Cohen guitar of “How Am I Supposed To Be?” is authenticated by a sing tear, while she performs “When I See Stars” at the 2013 Green Man Festival. These are songs of some sophistication, it’s difficult to see how she could evolve on them. Yet she has.

Does she see those evolutions in her songs? ‘That’s really kind of you to say. In some ways, yes, I can see how some have become lyrically slightly more complex or less overt, however, many are still the same style, I haven’t deliberately tried to change my style, but I guess I’m ten years older so I have (hopefully) evolved as a person, and perhaps that could be reflected in my music?’

There was the ‘East Twenties’ EP, then ‘Broken Into Pieces’ (2018) with the string quartet clarity of “Fades Away”, and the whistle-along “Don’t Go” – ‘you got me over-thinking.’

In real life, does Annie overthink things? ‘I’m interested to know why you ask if I overthink things, although the answer is… yes.’ Well, it’s in the lyric to “Don’t Go”. But it’s also a way of understanding her writing process. ‘I wrote “Don’t Go” with (producer-songwriter) Nigel Stonier, it was a co-write that we did in the studio when I was recording my second album.’

There is no song called ‘Coffee At The Corner Bar’ on the new album, but the lyric occurs in “Pretend” – ‘that was different. I wrote the lyrics to that first.’ She made a Zoom video for the song featuring all her Lock-Down friends. I want to be in her next Zoom video! She says ‘I pretend a lot, and I’ve had to do a lot of pretending during Lock-Down.’ Is pretending part of the creative process? ‘Not really – I think I pretend a lot with my kids, especially this year during Covid, at the beginning of all of this they were two and five and I wanted to protect them and have them be happy, so I put a lot of effort into ensuring a sense of safety and fun, which was not at all how I felt but I had to make their world feel light and happy, because I love them.’

Kids already have amazing pretend-worlds anyway. Are the three-&-six year-old in her videos those same two children? ‘Haha! yes, they are mine! As exhausting as it has been, probably having them here to play with has been good for me too.’

Does Annie have ‘characters in her head’? ‘You’re referencing the lyrics to “Midnight Bus”.’ Yes, but isn’t that the art of interview, to weave textures from your character and art, to take references and expand them into dialogue? ‘I don’t tend to have characters in my head when I write, as a lot of what I write is autobiographical or about things I might have read about, for example, so in a way there is, but not explicitly. Normally when I sit down to write a song I record myself, then start singing and playing. I go back to that until I have built a song or song-structure and then go back in and tweak it.’

Is it good interacting with other musicians? Is writing with other people a learning process? ‘Each co-write is different because everyone writes differently so I would say ‘yes’. But they have all been enjoyable.’

On the current album she has Polly Paulusma adding harmonies to “Secrets, Tell Me Lies”, while Matthew Caws of Nada Surf is doing harmony vocals on “Midnight Bus” (his own impressive “When History Comes” advocates Democratic voting while wearing a Paul Revere costume!). How did that come about? ‘We are friends and we co-wrote that song. When I was making the record he was kind enough to contribute harmonies and electric guitars.’

She also does her first cover, of Stephin Merritt’s Magnetic Fields song “The Book Of Love”. ‘Yes. I love that song! I started playing it because friends of mine were getting married and they asked me to perform at an open mic they had there, many of my songs are not love songs they are more like breakup songs and songs about grief and sadness… (such as heartbreak ballad “Out In The Cold” on the current album, ‘like a storm you have come, and you left me in the cold’). My friends are poets and literature folks, so I thought about what would be a good song, and I chose “Book Of Love” and then kept it in my set list.’

Does she have a list of other songs she’d like to cover? ‘I did a cover of Elliott Smith “Between The Bars” and I also like to cover the Gin Blossom’s “Follow You Down”, which I’m currently recording a little rough demo of. I also did a demo of the Foo Fighters “Up In Arms” the other day!’ 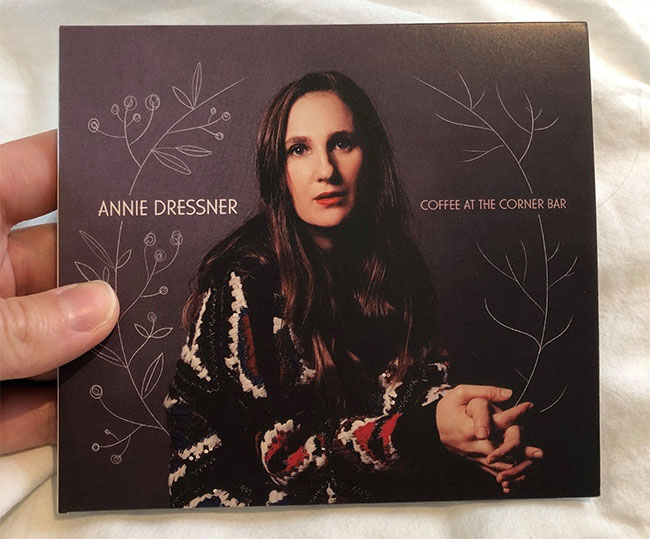 On the Livestream, she does a new song, “A Dance We Do”, by resorting to a lyric cheat-sheet, and a touching memory of her late Grandma called “Leather Chair”. She says ‘today was not eventful,’ then tells tales of dog-poo adventures while rolling down a hill, an online chess fad prompted by watching the excellent NetFlix ‘The Queen’s Gambit’, and how an autographed vinyl edition of the new album mailed out to friends in Berlin went missing in the post, only to turn up on eBay!

‘STRANGERS WHO KNEW EACH OTHER’S NAMES’

‘COFFEE AT THE CORNER BAR’

Expanded from an interview originally published in:

View all posts by Andrew →
This entry was posted on 2 October, 2021 in homepage and tagged Andrew Darlington, ANNIE DRESSNER, NEW SONGS, OLD SONGS. Bookmark the permalink.