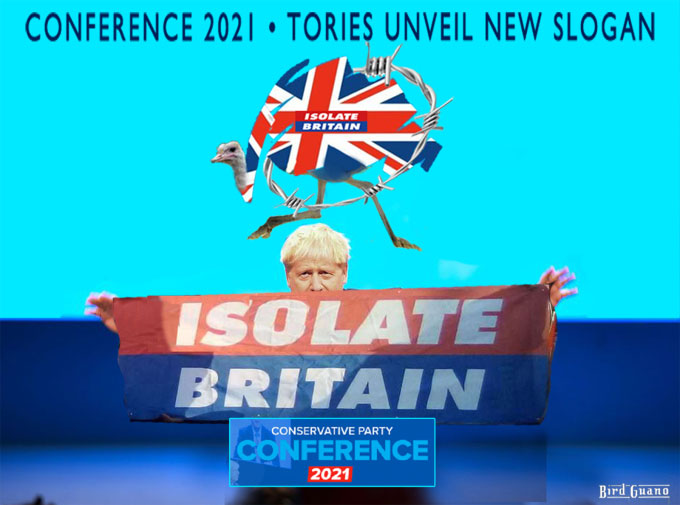 The column that refuses allow dyslexia to hold it bakc

MYSELF: Sir Kier Starmer, leader of the Labour Party?

READER: Yes, at the Brighton party conference, don’t you pay attention to anything?

MYSELF: Unfortunately I do, and what I saw and heard did not conjure up the word brilliant. The gormless Pavlovian dribbling from the audience, who applauded like trained seals every time they detected a comma, had him petrified. He was like a deer, frozen in a car’s headlights.

READER: You can’t freeze a deer in a car’s headlights, you need a proper cold room or a spacious chest freezer.

MYSELF: Be that as it may but having heard that the new Bond film Wokefinger is out, I assumed your intellectual weather cock might be pointing in the opposite direction.

READER: My intellectual weather cock is more than capable of pointing in several directions at once and anyway, don’t trivialise a great British institution. A new Bond film is, like the Queen’s Speech or a new album by Abba, beyond criticism.

MYSELF: I trust then that you took the opportunity to waste two precious, unrecoverable hours having been flogged this multi-million dollar dead horse?

READER:  Scoff if you like, but just read the reviews:
“The opening scene of Wokefinger, penned by the writers of Killing Eve and Dr Who features Bond’s 1963 Aston Martin DB6 being scrapped after failing its MOT on exhaust emissions, thus announcing the franchise’s long awaited arrival in the 21st century.” (Semolina Pfaffer-Westerhope, The Tatler).
“Bond is back, but this time the stunt men are women and all the ‘Bond Birds’ are men. The new bearded James is tolerant, vegan, drives an electric car, uses a bamboo Glock with sustainable ammunition and drinks craft beer which tastes like chilled piss… 5 stars.” (Felicity Smallgoose, Dog World)

ROLY-POLY RIPOST
Following our opinion piece, about Boris Johnson (issue 96) entitled Blimping Nuisance, which was accompanied by a satirical photograph, the Prime Minister* has emailed this reply which we are only too happy to publish. On the instructions of the editor I managed to get it down from its original 15,000 words.

Dear Farciminis Vita,
I normally find your organ, despite its Trotskyite leanings, satis ludibrium (smirks), but as for your somewhat unflattering illustration in a recent issue, depicting me as a non-dirigible free-floating airship, incapable of being steered, which is tethered on the front lawns of the Houses of Parliament for the amusement of tourists, I have only this to say; Hoc equidem reor factus es mihi nimis sufflatae! (Smirks, pauses for laugh, gets none). If I must be likened to a balloon (and it wouldn’t be the first time), I suggest that a more appropriate comparison would be with a more revolutionary, game-changing form of aviation such as the magnificent Hindenberg, a huge luxurious airship which regularly navigated the Atlantic Ocean between Europe and the USA, before being struck by lightning and bursting into a fatal, hydrogen-fuelled conflagration as it tried to dock with its mooring mast in New Jersey killing a third of those on board. My point of course is that we, magna Britannia populi will, now that we are free from the tentacle-like shackles of the super shower that is the so-called European Onion, will soon be able to return to our old, independent, triumphant and victorious trading routes around the cape to the dark continents and to reconquer the New World for our descendents.
Optimum Ipsum,
Bojo xxx

Dejected supporters of Hastings & St Leonards Warriors FC suffered a further setback this week, as their first season in the Hobson’s Denture Fixative League (South) continued to follow a downward trajectory. After last month’s controversial appointment to the club, Sicilian manager Sergio “The Horse” Peccadillo delighted reporters after declaring that he would dispense with translators and speak only English during his post – match interviews. The recent run of unfavourable results however, appears to have caused the talkative Italian to fall out of favour with Warriors fans. At half time in Saturday’s shock 8-0 defeat against Cockmarlin Thunderbolts, banners were unfurled on the terraces calling for the manager’s immediate dismissal. After the game, Peccadillo (54) responded robustly to a barrage of questions about his competence by by consulting his Time Out Book of Conversational English: “Please direct me to a chemist, I wish to purchase some shaving cream and a disposable razor.” he insisted. Pressed on whether he intended to offer his resignation, he snorted angrily: “Is there a lifeguard on duty? I have forgotten my bathing costume.”

Several people were arrested and charged with causing a public affray last Saturday outside Hastings nightspot The Cats Pyjama. An argument ensued after two men entered the bar dressed as C-Threepio and Chewbacca, two mechanical characters from Star Wars, only to be confronted by the club’s three armed security robots. Things rapidly escalated when the two men and several members of staff who sprang to their assistance were incinerated by a blast from the droids’ 300,000 volt Death Tasers. “We hold our hands up,” said  Bob Loaf, the club’s owner, “The Chinese-made security robots malfunctioned when their face recognition systems incorrectly identified the chaps wearing the Star Wars outfits as a level-9 hostiles and acted accordingly. We have contacted Robocop4S, the security company who supplied them, and they have promised to look into this. Lessons must be learned”. Police were called by terrified customers who had taken refuge in the cellar and a helicopter containing an armed rapid-response unit was despatched to the scene in less than four hours. “By the time my men got there,” Hastings’ police chief Hydra Gorgon told us, “the situation had calmed down somewhat. The unfortunate casualties, sadly now reduced to piles of smoking ash, were declared dead at the scene by paramedics. After a thorough search of the building, we concluded that the two rogue security robots had fled the scene and although there have been reported sightings of the pair trying to chat up a fixed odds betting terminal in a Ladbroke’s bookmaker in Upper Dicker, they are still at large. We strongly urge members of the public not to approach them, particularly if dressed as a cyborg”.

LEARN TO PLAY THE VIOLIN IN 9 SECONDS OR YOUR MONEY BACK!

Get bowing immediately and be the life and soul of the party! Instant results guaranteed. No need to annoy the neighbours with screechy practicing and boring scales. Imagine – the great classical works of Haydn, Beethoven and Liberace and folk evergreens like Paddy McGinty’s Goat and Ahoy for the Wooden-Headed Sailor will be instantly at your virtuoso fingertips. Just enter your bank details, mother’s maiden name, the name of your first dog and a recent photograph and we’ll do the rest: www.fiddleronthehoof.co.uk 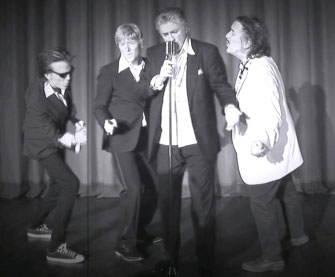 View all posts by Colin →
This entry was posted on 2 October, 2021 in homepage and tagged Colin Gibson, SAUSAGE LIFE 199. Bookmark the permalink.