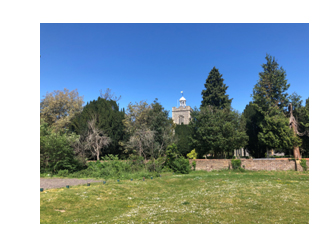 I finally take my long walk: Coney Green,
Across from the house that I live in.
A miniature take on the country, including
To scale dogs and walkers and a tiny

Village Church on the side. These empty steeples
That point are missiles now, scenting God,
Who sniffs straight back, clearly shrugging,
As each of us seeks direction and a locale

As if the children held in it had aged
And died, suddenly. Its board declares its intake
And the provided date echoes in me:
‘From Three Months to Five Years.’

As if this were the sentence that the Lockdowned
Were going to serve finally. How will the world
Have changed by that point, once this close
To cosy illusion has lifted, only to be replaced

By another, and then another again, when books
Burn? When will we find that the Farenheit
We all face will be as Ray Bradbury once predicted,
With all we knew and thought singed, then

Surrendered to the powers that oppose
Hearts that learn. I take a random road from
The Green, that I have never walked, having
Lived here for years, and turn into a star specked

Light tunnel. It is a seemingly endless Public
Footpath (the U68) that delivers me from
The urban to a form of ruralised past.
Moving further still through this zone I pass

Elderly owners’ Allotments, or at the current time,
Their ‘Allessments,’ as people size their smallholdings
To measure the scope and scale of what lasts.
And so I catch a glimpse of the place this once was,

A former breeding ground for the river, and fancy
I hear on the breeze former voices, colouring
The sunned and spectral air with times lost.
Shades that will never return, and in walking

Through, their fast fading remains to remind
And to honour Time’s shaping before the horrors
To come apply cost. Green gives way to Green,
As I turn into a larger enclosure. Spilling

From a long lip of houses the fat tongue
Of this field kisses me. It is in that single instant
Serene, before the relaying in of a near parade
Of Dog Walkers, which in turn becomes

Almost stately, as if each separate snare
Of confinement permitted the dogs
To walk people in some pale attempt
To feel free. But for that initial moment,

The field speaks of a much older England.
The movement of the grass in the breeze
Is a larynx, through which the ancient earth
Clears its throat. The sound that spills speaks

For trees, whose leaves weave and wave
Their agreement, as even scent casts opinion
And Mother Nature starts screaming,
In order to smother the joke that man

Has started to tell to keep the long invited
Dark in abeyance. But Aunt Gaia is appalled
At our mire and is raising the curse as we sit.
What dogs spend feeds the soil, but now,

Long forgotten airs comment on us.
They know that we in fact have no graces,
And that our scars coarsen landscape, as Covid
Flavours boredom with the texture and heft

Of our shit. I listen hard to the land, perhaps
Seeking forgiveness. In walking out I have wanted
To both sacrifice and survive. Previously,
I had only ventured out to the shop,

But today I was actively tracing time travel,
Hoping against hope for renewal, as well as
Bidding those workers of old to revive.
And once more honour the land

So that the tempered earth might protect us,
But it has for far too long borne the insult
That we have trampled and pissed into it.
So, is this the world biting back, or another

Final Solution that the fascists frame
And then shatter as seven billion souls taste
Lime pits? Will and can we return across
The world at large and this country.

Or in the small green I return to,
Close to the bunker of books that’s my home.
No-one knows. We’ll know soon.
So, welcome the ghosts who call to you.

I seek and need their lost counsel, as cursed
And cut in my county, the Uxbridge Green and
Peasant land, begins singing. And so I chorus
Back, scared, alone. How long now? I dare ask,

And cast my gaze, ever upward.
But the castle in cloud appears empty,
And I wait once more for the guidance
From an increasingly distant Throne.

View all posts by David →
This entry was posted on 9 May, 2020 in homepage and tagged David Erdos. Bookmark the permalink.