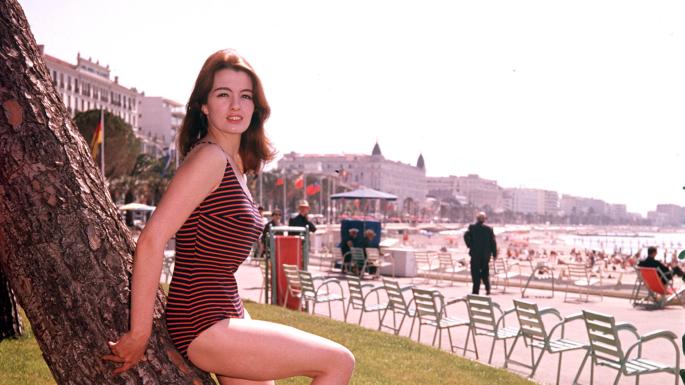 Christine was the famous Christine Keeler, protagonist of the “Scandal of the Century”, which caused the downfall of Harold Macmillan and his Tory government in England in 1963.

A rough diamond, who emerged from the gutter to take London by storm like a modern-day Zola heroine destined to make history, she was a live-wire, a luminous spark, game for anything. You could tell she was a star because in any crowded room all eyes would inevitably be drawn to this untamed, charismatic, young chick of dubious ethic, who caused a furore when she found herself having an affair with three powerful men concurrently. John Profumo, the English Minister of Defence; Captain Eugene Ivanov, the Assistant Naval Attaché at the Russian Embassy; and Lucky Gordon, a violent West Indian who held convictions for larceny, rape and grievous bodily harm, had all three lost their head for her. And who could blame them.

When word of her indiscreet and explosive love-life (Lucky toted a gun he didn’t mind using) filtered through both London’s shallow society and deep underground, MI5, suspecting possible espionage, decided it was time to investigate, and Christine became the epicentre of a political and social cyclone. In the end, after months of interrogations, lengthy trials, much lying and loads of publicity, careers were ruined, marriages broke up, suicides took place, Harold lost his job and Christine, charged for perjury, went to do a nine-month stint in Holloway prison. And sold her story for a lot of money.

In the summer of 1965 Christine and I went to St. Tropez. She had taken a house for the season and had invited me, all expenses paid. In turn my role was that of her chauffeuse, even though she was a much better driver than I was, but having a damaged reputation, she wasn’t allowed a driving license – at least, she wasn’t allowed insurance. A Catch 22 predicament.

It was a memorable trip which began with our boarding the ferry at Dover at the very last moment. We were late because Christine had gotten a sudden attack of primal fear that she might go hungry in France (of all places) and insisted on quickly going shopping: “You know what the food is like over there,” she explained as she rushed out of the supermarket, laden with tins of baked beans and Irish stew, just as I was about to have a nervous breakdown.

As we had been the last to get on the ferry, we were the first in the long line of cars to get off. I pushed the knobs, pressed the pedals, pumped on the gas, but nothing would induce the cream Triumph to start. The hooting horns of a swarm of holiday-makers behind us didn’t help either. Piles of pale bodies anxiously awaiting their long-planned vacation; with rollicking children hanging out of windows; with tents, suitcases, deck-chairs, bikes and even canoes strapped high on car roofs, wanted us out of their way, hey presto.

“I know I can’t fucking drive, I told you I hate fucking driving! Anyway you  drive it, it’s your fucking car!” I yelled back at her.

“I wish you wouldn’t swear so much – it’s common. You know very well that I can’t drive because they won’t give me insurance. I can’t even insure my bleeding mink – which is all right – just let anyone try stealing it from me!” Her brown eyes shut to a thin slit and I remembered how she told me that one of her childhood games was to shoot the water rats that swam in the river that ran at the back of her bleak caravan home. “My house is on wheels,” she would tell her school mates.

“Excuse me, miss, what seems to be the trouble?” a polite official inquired.

“I beg your pardon?” asked the polite official.

“We’ll just have to push you ladies off,” said the official and called upon a couple of sailors to do the job.

In the enormous grey hanger in Calais the customs officers smiled French charm at us (did they suspect the hash in my bra and the speed in Christine’s bag?). They were desolate, but there was no petrol here, they explained. Since I spoke some French, I set off to find a garage. Forty-five minutes later lugging litres of gasoline and an aching back, I returned to find Christine niftily showing her shapely thighs as she sat cross-legged on the bonnet of her car, signing autographs.

“They recognized me!” she beamed, flashing the impertinent smile of the young and slim.

“I thought you wanted to travel incognito.”

Our first stop was for lunch at a country auberge. I ordered frog’s legs, Christine said: “Ugh!  Steak and chips please. Well done.”

She tasted my frog’s legs: “They’re good,” she said.

“I know they’re good.” She ate my frog’s legs as I was left with well-done steak and chips. Ugh.

When we arrived in Paris, Christine insisted we should stay at the George V.

“It’s got to be one of the most expensive hotels in the world, Chris,” I informed her as though she didn’t know.

“It’s just for one night. We need a good rest on some soft beds. Don’t worry about the money, I’ve got plenty.”

A steaming bath in a huge marble tub, a change of attire, a telephone call: “Hi, we’re from London, Annie Ross told us to ‘phone. Can we come to your club in trousers?”

It was the in-spot, called ‘The Living Room’ and that’s the feeling it had – cosy: comfy sofas, a bar to one side, the jazz combo in a corner. We were bought drinks, chatted up the musicians, took a pill to keep awake, snuck into the lavatory to get stoned, got invited to another place, then another. In the early morning hours we picked up a piano player with a notable dandruff problem, who took us to Les Halles to eat the traditional onion soup.

“It’s good,” admitted Chris who was fast acquiring a taste for French fare.

“I hear they’re shifting Les Halles out of Paris. What a shame.” I said, saddened by the fact that also the market of Covent Garden was due to be relocated quite soon.

“It will leave a lot of rats behind,” said the pianist, brushing dandruff off his tattered jacket’s collar.

“Hey, what’s the time?” I suddenly realized that the dawn had long dawned.

“Nine! My God, Chris, we should get started.”

We went back to our plush room, picked up our luggage, took more speed; she paid for the soft beds we hadn’t slept in and we steamed out of gay Paree. Needless to say, by this time Christine, who couldn’t bear my snail pace, was driving.

Finally we arrived at our cute cottage on the outskirts of St. Trop, under a French Riviera sky, which obviously means it was dripping with stars (both human and cosmic).

Too early in the morning we were woken by a gale which was shaking our small house, and maniacal knocking at the door.

“Allo, allo, allo!” someone was shouting from outside.

As I rolled out of bed I got my feet wet: there were inches of water on the floor. “Jesus, we’re flooded, I almost drowned, the roof must be leaking.” I moaned. “Oh, Christine, you left the fucking bidet on!”

“Don’t nag me, just open the bleeding door, you’re so slow.” She ordered, as was her way of doing.

“Allo, allo, allo!!” The man outside sounded like the enemy. I didn’t feel at all secure and besides I have a thing about being bossed about.

“Don’t shout at me, I don’t like people shouting at me, you open the fucking door!” I tucked my cold, wet feet back into bed like an ostrich – what did I care about the lunatic in the storm.

Christine went to the door. His name was Franco: rough in a sort of Corsican-peasant appearance, and the secretary of playboy millionaire Gunther Sachs (soon to become Brigitte Bardot’s husband). Were we free for lunch? We certainly were!

But we did not go down well at this posh party where we were treated with chilly reserve by bejewelled, elegant, perfectly coifed and immaculately manicured beauties accompanied by highly polished socialites and suave aristocrats. Our informal, swinging-London ways, my patched blue-jeans, Christine’s spontaneous cry: “Blimy, is this all there is?” at the meagre buffet served by mute black waiters in red livery, ensured we would not be asked back. It hardly mattered, from then on there was no shortage of fun. Frolicking in Mediterranean waves, picnicking in pine forests, sailing on yachts, gossiping in cafés, excursions to restaurants in neighbouring villages and never missing a wild night in the innumerable discos, dancing into the glorious sunrise. St. Trop. was buzzing: from de-frocked priest to de-throned kings; from the famous and filthy-rich to characters like Yuri, the extravagant, wild Cossack artist, bone thin like some ancient pirate, reputed to have escaped from a prison camp in Siberia, who was now planning to descend into Vesuvius wearing an asbestos suit: “to paint in the bowels of the earth”. And of course there were the curly haired, hungry eyed, loose, lost, lusty, penniless young adventurers. Those were the ones that tugged at Christine’s heart (and purse) strings, taking her for all she had. For a woman with goddess-like sexual power why was it that in the final run she was always the victim?