Climb aboard the HMS Pinafore and hear about the lass that loved a sailor! 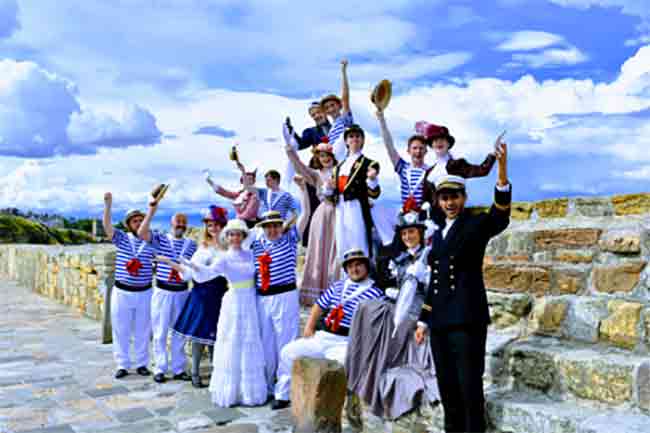 The University of St Andrews Gilbert and Sullivan Society

Returning to the Edinburgh Festival Fringe after the success of their 2016 production of The Mikado, The Gilbert and Sullivan Society are inviting you to board one of the most famous ships in British history, The HMS Pinafore. Prepare for stunning music, song, and dance on the ship’s decks, delightfully presented by the university’s most talented performers from St Andrews.

Climb aboard HMS Pinafore! Josephine’s to be engaged to the First Lord of the Admiralty. But she’s madly in love with Ralph, a humble sailor, much to the annoyance of her strict father Captain Corcoran. Can Ralph summon the courage to confess his feelings and elope with her? What will happen when dear little Buttercup reveals a secret that could change the lives of everyone on the ship? The Gilbert and Sullivan Society of St Andrews bring Gilbert’s wittiest writing and Sullivan’s most soaring melodies to life in this lively story of turbulent love on the ocean blue. Sail back into the 1870s, step onto the ship, sit on the passenger deck and experience the story of love and rivalry unravelling on the ship. It doesn’t matter if you’ve been singing Gilbert and Sullivan since a child, or have never even heard classical music before, The Gilbert and Sullivan Society are excited to welcome you on board and meet the illustrious Captain Corcoran, his daughter Josephine, the heroic Sir Joseph Porter, and even purchase refreshments from the ships’ Bumboat Woman. This Fringe, the ship undertakes a celebratory voyage – a voyage that may change the future of the British Navy forever!

Dedicated to raising awareness for the work’s of Gilbert and Sullivan, the University of St Andrews Gilbert and Sullivan Society are excited to return to The Fringe, bringing HMS Pinafore to Eindburgh in the hope a new generation of G&S converts can experience the joys of light operetta. Loved for over a hundred years, this operetta has stood the test of time quite like no other, it being one of the most performed operas both in amateur groups and by professional companies. A stinging satire on the class system, love and duty, William S. Gilbert’s swathing commentary on the class system still bites to this day, while its portrayal of love in the face of all odds still touches the hearts of many. It’s a topsy-turvy world for sure! Premiering in 1878, and even travelling to the USA, seeing HMS Pinafore was described as a ‘mania’. Desperate to revive the mania in the heat of the Edinburgh Fringe, the HMS Pinafore will transpire as the audience enters amongst the notorious poles of Paradise in Augustine’s, transporting our guests back to the hey days of masts, sails, and sea shanties. Musical director, Emilia Wright, describes the production as ‘a family friendly treat for everyone that loves musical theatre.’  Meanwhile, Emma Barker who has participated in over 20 G&S productions, her most recent being her directorship of The Gondoliers at The Byre Theatre, St Andrews, is excited to welcome the audience into the colourful world of HMS Pinafore. ‘Everyone is a passenger on our ship from the moment they enter the auditorium. It’s interactive, immersive, and filled with joy. We know we’ll have the avid fans in the audience, but we hoping to find new fans of Gilbert and Sullivan in the Fringe crowds.’ Supporting the company, the ensemble is accompanied by Piano Accompaniment Scholars Anthony Hickling and Josh Wood and features movement choreographed by Seonaid Eadie.

‘Sprightly and buoyant, Pirates of Penzance has me very excited for the Gilbert and Sullivan society’s next venture.’ Emily Elderfield, Owl Eyes.

For further information, images or to request a media ticket please contact Melissa Jones on [email protected] or 07407302778 or alternatively contact the venue.

Tweet
This entry was posted on 15 August, 2018 in homepage. Bookmark the permalink.