I don’t know exactly how many chapbooks, folios, broadsides, and poetry cards Cold Turkey Press has published. I never counted. But it must be in the hundreds. All of them—produced in handmade, illustrated, and limited editions—are unique manifestations of their publisher’s mind: scholarly without being academic, exotic but not obscure. They constitute an archive that subverts the ordinary both in literary and artistic terms.

Bart De Paepe’s bibliography describes them in detail with sample illustrations from the very beginning in 1970—when Cold Turkey started out in Rotterdam with it first publication, a Dutch translation of a book of poems by Charles Bukowski—up through the present. Most of the publications are in English, however, with a strong emphasis on expatriates and cultural dissidents, like the publisher Gerard Bellaart himself, a Dutchman who lived for many years in England and now lives in France, where he continues to produce his limited editions. Among the writers and artists who have benefited from Bellaart’s generosity are Sinclair Beiles, Heathcote Williams, Ira Cohen, Harold Norse, William S. Burroughs, Allen Ginsberg, d.a. levy, Ed Sanders, Carl Weissner, and Malcolm Ritchie, as well as earlier cultural dissenters like Artaud, Lorca, Cocteau, Cendrars, the pre-Dadaists Arthur Craven and Julien Torma, and an impossibly long list of others.

Two of Cold Turkey’s most-favored authors—Beiles, a self-exiled South African, and Williams, an Englishman who has been likened to a modern Shelley—were both close friends of Bellaart’s. Beiles, who died in 2000, is represented by posthumous chapbooks as recently as 2012 (The Idiot’s Voice) and 2013 (Bone Hebrew). Williams, who died in 2017, was published by Cold Turkey as far back as 1975 (Manifestoes / Manfesten). Ever since, a torrent of his poems have poured forth on separately published cards, many collected in portfolios such as American Porn (2009) and Was Moby Dick Behind 9/11? (2012), or in some cases as stand-alone folios such as his antiwar verse memoir My Dad and My Uncle (2104). Similarly, his prose memoirs, produced as chapbooks, have been singularly brilliant Cold Turkey mainstays: Harold Pinter: A Portrait (2014); Burroughs in London (2014); and Of Dylan and His Deaths (2015). 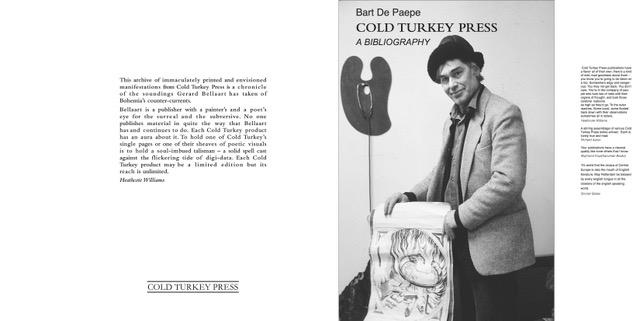 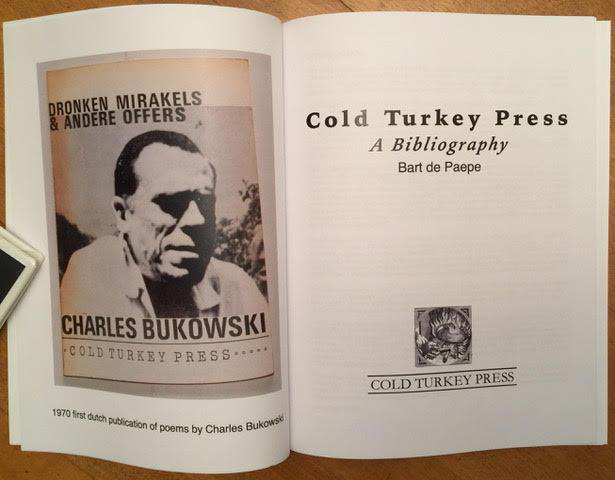 View all posts by Jan →
This entry was posted on 26 January, 2019 in homepage. Bookmark the permalink.