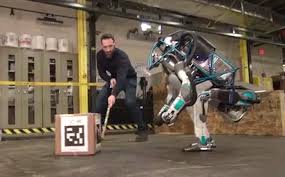 Hopes of AI machines taking our jobs received another kick in its titanium groin yesterday when Boston Dynamics’ disastrous program to build a shelf-stacking robot ended in failure. (see video below). Top US scientists have now decided the only workers that robots can realistically replace are US politicians.

Head of Robotics at Boston Dynamics Hans Creosote PHD, frowned, ‘We’ve spent $700,000,000 developing the Shelf-Stacker Hyper Independence Technical Employee Replacement Robot (S-S.H.I.T.E.R.R.) but every time we turn it on all it does is knock down the boxes then tries to mate with them. Our backers were anxious to recoup their investment so they decided the only job on earth low-skilled enough for our defective robots to replace were US politicians. A deal was quickly completed with the Un-human Resources Centre of the Federal Government and the robots will be phased in during the Senator’s summer holidays. Er …Good luck!’

A White House aid commented that Mike Pence, Rex Tillerson and, of course, President Donald Trump himself are ‘first in line for replacement’, adding, ‘Before the new defective robots come on line, due to the volatile political situation in Charlottesville and North Korea, new interactive Mickey Mouse talking dolls will be purchased from Amazon and used instead as a precautionary measure.’

The Boston Dynamics’ team have already fitted their new replacement ‘bots’ with ground-breaking clapping software and extra long-life Duracell batteries in preparation for Benjamin Netanyahu’snext state visit where it is hoped that they will be able to perform the obligatory 33 standing ovations without exploding and bursting into flames. Other necessary attributes, including random sentence generation, jerky hand gestures and illogical press conferences, were said to be ‘well underway’ with one team member suggesting, strictly off the record, ‘Haven’t you been watching TV recently? The Shelf-Stacker Hyper Independence Technical Employee Replacement Robot might not be able to put one box on top of another without making a total dick out of itself but it’s not that bad.’

Funny video – Trump is a fortuneteller to foresee everything? Donald Trump wins presidency and creates a robot army, Donald …

View all posts by Ethan →
This entry was posted on 23 August, 2017 in homepage and tagged Ethan Harrison. Bookmark the permalink.