Dogs in the Rain: A Review in the Form of a Poem of ‘Warp and Woof’ 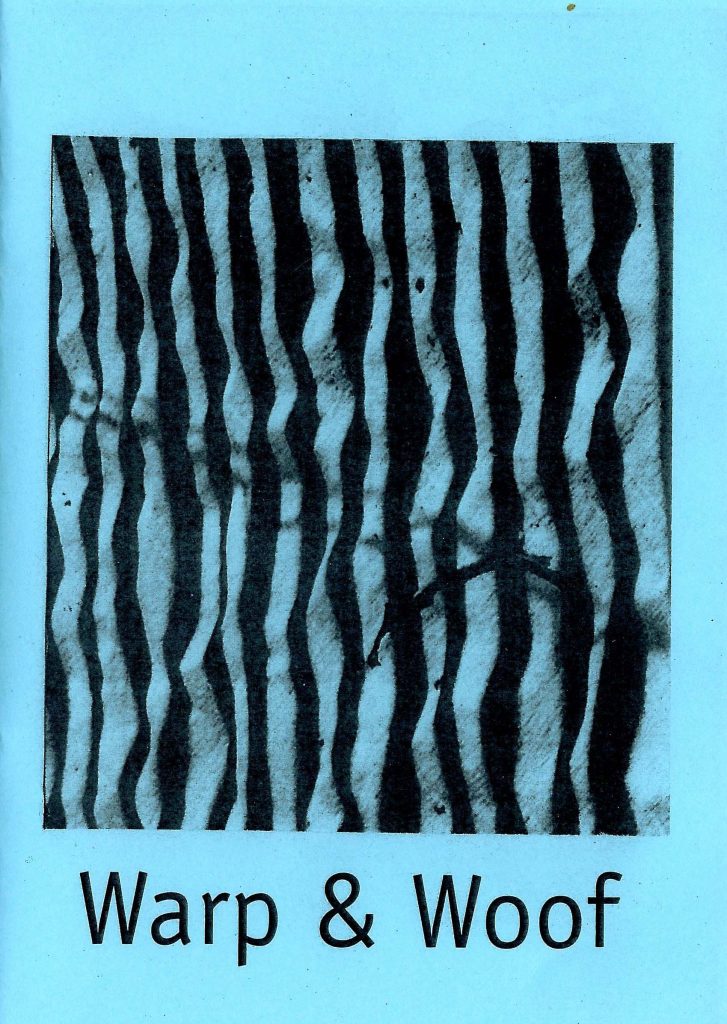 Reviewing reviews can be tricky,

As if the repeating of viewpoints can

In some way distract. And so charged

With the task, and with the need to distinguish,

I choose the form of a poem to draw attention

To detail and to in my own small way, interact.

The pamphlet is dense, as all chapbooks are

With opinion; appraisals of albums, and their affects,

‘Absolutely She Cried’ strikes me most, being as it is

A prose-poem, capturing The Doors’ ‘Alive She Cried’,

With his needle scratching ‘a warped ouroboran groove.’

Listening to the Floyd she’s transported by ‘Echoes’

And ‘the motionless albatross in the air.’

Her recollection is brief but shot through with detail,

The privilege of the place breeds a conflict

Between what is elite and what’s shared.

John Gimblett’s ‘The First and the Last’ talks of Fripp

And all he’s accomplished. From Bowie to Blondie

And all the way back to KC. But its on the first Peter Gabriel

Tour that Robert is most praised and pictured, sitting

On the side of the stage, flagged by curtains ‘throwing out

magnificent music like the sun and it’s neutrinos, speckles..’

In terms of World War two and the legacy it engendered.

He sees Waits as a phantom from a ‘muddy hole in that war.’

An album for the ‘urban dispossessed’ and

Leaves us is certainly worth waiting for.

With aplomb, ‘a music belonging outdoors, to raw women’

And all of its ‘strident calling’ for the intimate

Realm of the heart. Her writing is rich, her immediacy clear

As she listens, transforming time in her ‘morning kitchen’

From so called normal encounters to those close to art.

Andrew Darlington Jefferson’s the old Airplane for us,

From Dylan’s Basement tapes to an Abearareon campsite,

Bert Jansch’s Jack Orion sits next to the Convenience Kings.

Editor Loydell chooses well and the voices are both

Eloquent and instructive, as we align tastes as readers

To those writing for us, who in these gentle pages

Celebrates those who inspire

The weather is warm but still it cuts through us.

As it changes and weathers us we find music to alter

The soul and assist. The dog barks. The voice breaks,

Taking the heart along with it. These reviewers choose songs

That reveal the rain and warp within living

Is soon saved by singing and what it teaches us to resist.

View all posts by David →
This entry was posted on 3 November, 2016 in homepage. Bookmark the permalink.