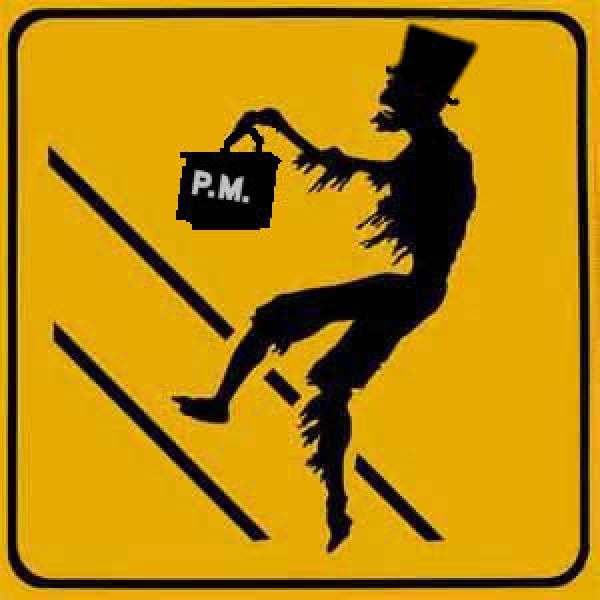 Priorities can at times become a little confused where the pressures of power are concerned, and the long term consequences are liable to be severe if the final word lay in the hands of a political retard, as of course they usually are

There comes a knock at the door. The PM looks up from his spread sheets of statistics with some irritation.

His PA enters with some papers in his hand.

‘Well what is it?’ says the PM shortly.

‘It’s a new report on climate change,’ says the PA. ‘And I think it is very important that you see it, sir.’

‘As you can see I’m very busy just now,’ says the PM, but taking note of the PA’s concerned expression he relents a little.

‘Only two or three pages, sir,’ says the PA.

‘Well just read it to me will you?’ says the PM.

The PA clears his throat nervously and reads.

“Climate change ─ The truth.” He begins. “A report by six leading experts on the dire consequences of the continued exploitation of the earth’s resources.”

The PM meanwhile is muttering over his figures and hardly hears a word.

“The scale of these climate changes,” the report goes on, “is vast, and once in motion they are liable to gain so much momentum that it will no longer matter whether we change our habits or not; once the original balance is lost no one can predict what the outcome may be, except that the environment could well become one in which human life is unsustainable.”

The PA stops and looks up; but the PM is deeply immersed in his figures, and hoping some of it gets through to him the PA continues.

“Therefore those in power must now decide what must be done to halt this process ─ and do it now, because very soon it will be too late.”

The report goes on to speak of widespread and permanent flooding; of oceans poisoned by industrial effluents; the destruction of most wild species and the growth of virulent diseases. When he has finished reading the PA looks ashen, he waits awhile in silence but the PM does not look up.

‘The report on climate change sir ─ that was it.’

‘Oh, climate change, yes, yes, yes,’ says the PM. ‘Seems to be the latest fad among these fellows. But look here, Watkins, I have more important things on my mind than climate change, you’ll be coming in here disturbing me with stories about homeopathy next ─ just leave those sort of hippy ideas for the Prince to witter on about will you?’

‘But sir, these men are all meteorological experts and university professors much respected in their field.’

‘What universities?’ snaps the PM.

‘Well two of them are heads of department in the universities ofIllinoisandDallas, and others here atDurhamandLiverpool.’

‘Right, well just leave it somewhere for now and see about my tea.’ says the PM.

‘But sir, the report is calling for urgent measures now.’

The PM explodes: ‘Do you realise what I’m dealing with here?’ he shouts, and the PA flinches.

‘I’ve got no time to listen to the whinges of small town eggheads when I have important issues like the bank rates and economic recovery to deal with, so just take it away and let’s hear no more of it,’ he bellows, and the PA, his eye on his job is reluctant to push it further.

View all posts by David →
This entry was posted on 11 April, 2013 in homepage and tagged climate change, dave tomlin, Prime Minister, Sustainability. Bookmark the permalink.