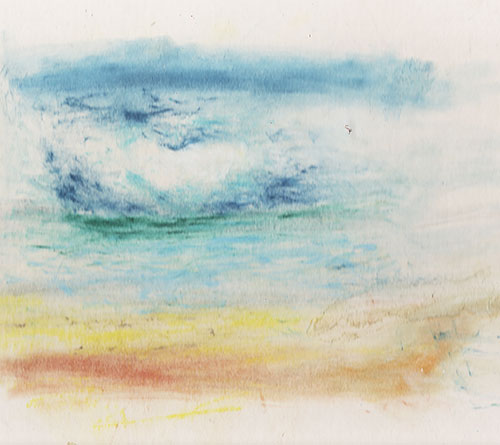 Gaia is a metaphor. A useful metaphor, but a metaphor nonetheless. Because the interactive dynamic Earth-systems in some ways resemble those of a living organism does not mean that it is a living organism. James Lovelock makes this distinction clear in his first few paragraphs. ‘Gaia’ – the name of the Greek Earth-goddess, was proposed in 1969 by ‘The Lord Of The Flies’-novellist William Golding, as an appropriate designation for ‘the Living Earth’ idea. That its leading champion, James Lovelock, is then ‘unrepentant’ about persisting in employing this useful metaphor as part of his didactic arsenal, with conscious purpose, sometimes lends ammunition to the New Age mystics and Loony-Tune Pagan groups who take Gaia on face-value. Lovelock speaks misleadingly of the ‘goals’ of Gaia. Inanimate systems cannot have goals. The fragile temperate biosphere we inhabit is more a state of equilibrium, a random and shifting compromise between forces, with ‘checks and balances’ resulting as these complex interactions fine-tune and adjust against each other. Only sentience, the accidental by-product of this chaotic fluctuation, has goals. If Earth has a consciousness, it is the resident naked apes who provide that brief experimental state.

As Crispin Tickell writes in this book’s Foreword, Leonardo da Vinci presciently saw the human body as a microcosm of the Earth, and the Earth as a macrocosm of the body, without being aware of just how much the human body is a symbiotic assemblage of tiny elements of life – bacteria, parasites and viruses, which are often at war with each other. Pretty much as Gaia is seen to function. Or now, it seems, to veer into malfunction. We’re all familiar with the vocabulary of Global Warming. We’ve watched the poignant TV-docs of polar bears on vanishing ice-floes, seen the satellite scare-photos of reducing ice-caps. We’ve no excuse for not knowing that the systems that govern climate have shifted into a dangerous instability, and that negative feedback-loops are accelerating the process.

Other planets have vast and turbulent weather-systems. Other planets have, or show evidence of having had, geothermal activity. Only Earth in the entire immense cosmos is known for certain to have biota. That’s why the ‘Curiosity’ probe is trundling around arid Mars now. That’s why it’s important to determine whether Mars does, or did ever harbour even primitive microbial life. Many extra-solar planets have been tentatively identified. It seems that planetary systems occur with some degree of frequency. But life is something else entirely. Its likelihood is so far impossible to ascertain. It’s impossible to draw up a chart of statistical likelihood with only one sample. So far as we can be certain, Earth is still the only world to evolve biota. And that thin shell of biosphere is another of the interactive elements that determines the conditions of Gaia.

Chaos Theory enters into the equation round about here. The idea that very small environmental changes can produce huge and unpredictable consequences. As with butterflies and hurricanes. This is not just fancy theory. The poisonous atmosphere of the newly-formed Earth was subtly altered over millions of years by bacteriological activity. Enabling plant-life, which accelerated the process further. Ushering in the kind of atmospheric composition that allows it to become this planet of the apes. It’s just that now those clever naked chimps are inflicting their own hazardous changes on the planet.

Science Fiction talks blithely of terraforming Mars. While out-of-control forces are already transfiguring our own planet in ways that can only become increasingly apparent, in ways already suggested by enviro-disaster movies such as Kevin Costner’s ‘Waterworld’ (1995) and Roland Emmerich’s ‘The Day After Tomorrow’ (2004). Even the title Lovelock selects – ‘The Revenge Of Gaia’, adds a SF slant, as though this is an ongoing episode from the epic ‘Star Wars’ cycle. And yes, imagination is a useful tool against short-termism. A single lifetime – let alone a political term of office, is not long enough to register the changes going on around us. Science provides the necessary template. Imagination can populate past and future with incident. This can provide the overdue tool necessary to envisage what Lovelock describes as the ‘coming crisis’, warning that ‘nothing so severe has happened since the long hot period at the start of the Eocene, fifty-five million years ago’. How are we expected to conjecture such conditions? Does he overstate for effect? Unlikely – the ‘climategate controversy’ demonstrates just how quickly deniers seize on any evidential inconsistency to fuel their smear-campaigns. But that episode does serve to illustrate how much indeterminacy there is within the calculations, and how unpredictable results can be.

Sci-Fi has been here before. We’ve lived with imminent apocalypse since Hiroshima, since technology took over from biblical visions of armageddon. Why should Climate Change be different? We got through the Cold War by a hair’s breath combination of calculated self-interest and luck. Neither is an option now. And so far, the twenty-first century has been misguided by the stupidest free-market economic concepts, what Crispin Tickell calls the ‘deeply entrenched fashionable delusions about the supremacy of market forces’ (and Lovelock calls ‘the mess of current energy and transport policy’). With policies that are based around the unprincipled principles of limitless expansion gorging itself on profligate acquisition, which are the direct antithesis of the responsibilities required if Global Warming is to be addressed. To Lovelock there is an ‘extraordinary degree of international effort and carefully planned sequences to implement’ ahead of us, but we are ‘tribal animals’ with deeply embedded behavioural-DNA resistant to coordinated change. Things don’t look good. Politicians tweak at percentage-reduction in greenhouse-gas projections for the coming decades in the full knowledge that they will not be fulfilled. While whatever fuel-economies or renewables-implementation are achieved are simultaneously swallowed up by the expanding energy-needs of a world-population nudging nine-billion. And globalised civilisation is so precariously stretched that the slightest environmental tilt will have terrible and far-reaching consequences. As Lovelock says, ‘the planet we live on has merely to shrug to take some fraction of a million people to their death.’

We are victims of our own smartness. Victims of our own success. Ten-thousand years of superstition, prayer, religious piety and ritual sacrifice saved not one plague victim. A brief few centuries of rational medical science, balanced diet and hygiene has expanded life-expectancy and reduced the threat of early death, to such an extent that population-levels are already unsustainable. The overpopulation bomb adds to an instability that will adversely touch every Earthling over the coming century. Lovelock has written elsewhere about how ‘we have grown in number to the point where our presence is perceptibly disabling the planet like a disease.’ To Tickell the answer is ‘how to achieve symbiosis.’ There’s no problem on Earth today that could not be resolved by reducing its human population to pre-industrial or medieval figures. That’s my assertion, not necessarily James Lovelock’s.

So Global Warming is now generally – if grudgingly accepted, as Lovelock concedes in this highly-readable book. While ultimate outcomes remain impossible to predict. Climate changes will happen as systems adjust against each other, until a new stable equilibrium emerges. What that equilibrium will be is still anyone’s guess. Whether the ongoing escalations continue indefinitely, beyond the optimum temperatures for life as it did fifty-five million years ago in the Eocene. Or simply, if devastatingly, restabilises at a new, if different, level, to which a much-reduced human civilisation will have to awkwardly adapt. All planets achieve a kind of equilibrium. Mars has one that’s remained unchanged for millions of years. Venus has one. Neither has one capable of supporting life. There’s so much unquantifiable theoretical data involved, each with its own built-in uncertainties, that no amount of computer climate-modelling can foretell it. As Lovelock gloomily predicts while tinkering with his ‘Daisyworld’ simulations, breeding pairs of humans will likely survive. With the full scientific and technological resources at our descendents disposal, some kind of SF future will happen. What that future will be is still the stuff of speculation.

He laments what we have already lost. The pollution and rape of his once-familiar English landscape. Although obviously Green by necessity – his ‘The Gaia Hypothesis’ (1972) provided a vital catalyst in the Global Heating debate, Lovelock has antagonised the Green Movement by embracing nuclear energy as a temporary fix to tide civilisation over until nuclear-fusion provides a more lasting solution – as though such a technology is inevitable! And by advocating ditching ‘extravagant and intrusive’ wind-turbines in favour of massive sea-defences for threatened coastlines. Governments must, must, must he hectors. Surely aware that governments – fixated on electoral think-tanks and focus groups, won’t, won’t, wont. Not until there’s absolutely no other alternative. But he has a point, about the sea-defences anyway. We don’t need Atlantis to illustrate previous inundations. Just beyond the reach of recorded history, the North Sea was the forested ‘Doggerland’, home of human tribes and animal species. This happened at the end of the most recent glaciations, the last time the ice-caps melted, ten-thousand years ago. A blink in time for Gaia. Yet nature is resilient. There have been mass-extinctions before. In the lifetime of Gaia it’s no big deal.

Even taking on Lovelock’s most bigoted Right-Wing Big Pharma, Military-Industrial, Big Petroleum and Agri-business free-market fundamentalist critics on their own terms, and conceding – OK, Global Warming isn’t happening, it’s not our fault, it’s part of a natural cycle of climate-fluctuations… by implementing more rational policies, we still come out with a cleaner more-sustainable energy-efficient and more tolerably inhabitable planet. Yet mere stability – as James Lovelock relentlessly emphasises, is not enough. It’s equivalent to a terminal lung-cancer victim anticipating a cure by belatedly quitting smoking. Because the processes are already in motion to counteract the viral blight of the proliferating ape. Our racial hubris could so easily be checked – Gaia-wise, by a single species-jumping pandemic. There’s no sentient element to such a solution. It’s purely a random series of events. But, as with the model of climate-change, it has the effect of a self-regulating health-check on an endangered Gaia. This is where the checks-and-balances built into the Gaia concept come into play. Gaia is a metaphor. Earth is not a living thing. Human beings are.

View all posts by Andrew →
This entry was posted on 20 April, 2017 in homepage and tagged BY ANDREW DARLINGTON, nick victor. Bookmark the permalink.

3 Responses to ‘EVE OF DESTRUCTION’