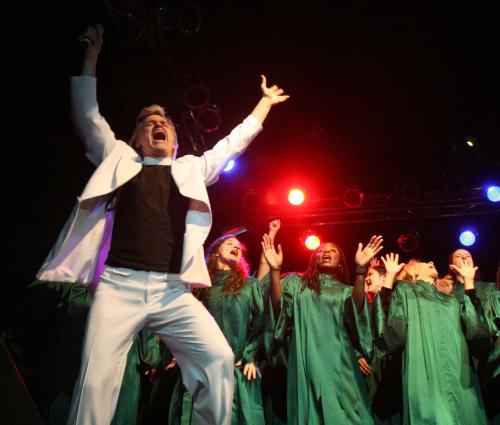 “The intensity of the Reverend’s emotions is outlandish—but also moving because, for all the absurd trappings, the message is vital, the righteous fury on behalf of Mother Earth.”
Time Out London

Over the last year, Reverend Billy & The Stop Shopping Choir have applied their signature musical activism to counteracting big corporations’ role in climate disruption and mass extinction. By turns attracting critical and popular acclaim and threats of serious jail time.

The Faster, Monsanto! Die! Die! tour comes to London from The Live Ideas festival in New York and Vienna’s Donau Festival. A 90-minute show with 12 singers and a 3 piece band, on its surface the show resembles a church service but its brand of wild punk gospel will comfort even the staunchest secularist.

Prepare to be shaken, stirred and served neat on a bed of hot coals.

Reverend Billy and the singers, led by director Savitri D and music director Nehemiah Luckett, have been opposing Monsanto for the last year, beginning with a campaign to draw attention to the collapse of honey bee populations due to “neonic” pesticides and changing weather.

Reverend Billy has won an OBIE Award, the Alpert Award, The Dramalogue Award and The Historic Districts Council’s Preservation Award (for leading demonstrations to save Manhattan’s Poe House), and has been jailed more than 70 times. He was a central figure of Occupy Wall Street and toured 25 OWS tent communities from Zurich to Oakland, CA with the Stop Shopping Choir.

The Stop Shopping Choir are wild anti-consumerist gospel shouters and earth loving urban activists who have worked with communities on four continents defending land, life and imagination from reckless development and the extractive imperatives of global capital. They employ multiple tactics and creative strategies, including cash register exorcisms, retail interventions, and cell phone operas. They are entertainers and artists, performing regularly throughout the US and Europe.