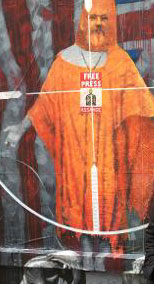 Let’s raise a toast to you,

And the struggle for your freedom.

Freedom from and freedom to – the sophistry of philosophers.

But it can be a business.

Neo-Liberals are free to do what they want,

But then so are hyenas.

And we find rich mobs

Don’t they love the word?

And the kidnap of the word, of course.

They mugged it, threw it into a cell.

Like Mars Bars are good for you, or that a country has weapons of mass destruction.

But when you, Julian drew aside Shadowland’s veil, revealing what’s there

In pictures, real ones mind, not doctored photos, or hearsay, or cooked up interviews.

And you showed us.

The enlightening dark, glittering in its cruelty.

They came for you and they are torturing you.

But instead of arrows they shoot you with tranquillisers.

And strip-search you – for what?

You have nothing left but what you know,

And what you stand for.

Standing too, in an upright coffin as you’re driven to court.

Deprived of sleep and company.

So now they are killing you

So now they are cruel beyond measure.

There will be a time, in the better world we struggle for

When you’ll be venerated.

Who told the truth and were persecuted.

So let’s carve your name with pride.

Not later, when you’re done and dusted,

Or dead or extradited.

For how many know that –

‘Extradition shall not be granted if the offence for which extradition is required is a political offence.’

And since they are throwing the book at you

This is article 3 para 4 of the US extradition treaty.

And how many know this?

Is married to her Lord, who Wikileaks exposed.

So who will they come for next?

No journalist who behaves, that’s for sure.

May you soon walk in the sun.

View all posts by Jan →
This entry was posted on 12 December, 2020 in homepage and tagged Jan Woolf.Julian Assange. Bookmark the permalink.

One Response to For Julian Assange