Government shutdown: the takedown of America 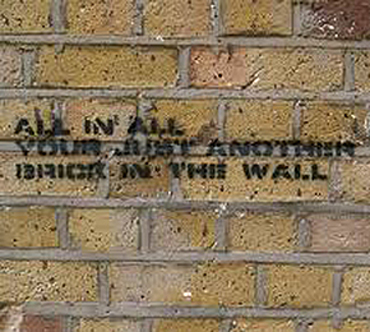 Another brick laid in the path to decimation.

While the Democrats and the Republicans, the White House and the Congress cross swords over the funding of government;

While the White House orders the shutdown of visible national parks and war memorials;

While the USDA threatens to turn off food-stamp benefits for 50 million Americans in November;

While this deadly game of “who will blink first” goes on;

Operation Chaos, the higher-level plan to bring America to its knees, proceeds. Its ultimate goal? Reducing the United States to the status of “desperately needs rescue.”

That is the status which elite Globalists demand for every nation on Earth, in order to introduce one currency for the planet, and one system of management for all nine billion people.

In such a system, all borders and sovereign countries would be eradicated, “for the greater good.”

No, this isn’t going to happen tomorrow, it’s a long-range op and a long-range plan. But it’s being implemented.

Presidents of the United States are agents of the plan, every one of them. They accept this future. They entertain various delusions about it:

One, the US will emerge as the leader of a Globalist world.

Three, the US will participate as “an equal partner in a kinder, gentler structure.”

Four, the US will be submerged in a glorious international collective, for “the greatest good of the greatest number.”

Five, mega-corporations and banks will make the need for national governments largely obsolete.

Six, the US will finally receive its comeuppance for centuries of oppression.

None of these views is really accurate.

The future which the elite Globalists are planning and implementing is a sluggish, morbid, depopulated Earth dominated from a point of Central Planning, and run by a bureaucracy which would make current national and regional bureaucracies look like streamlined rockets.

In this future, the individual as an idea and a reality would disappear.

Order out of Chaos is the guiding strategy for getting there.

Create crises, large and small, provoke a level of fear that results in people everywhere demanding “a restoration of security, no matter what it takes.”

Set person against person and group against group, cut off people who are on government benefits, while swelling the ranks of those who depend on governments for physical survival.

Characterize all this as “share and care” and even messianic rescue from above.

Make it appear there is no way out, no way to exit this future awaiting all of us.

Meanwhile, keep the world on wartime status, which has been the case since 9/11.

And up the road, to enforce this New World? A single linked international army, a single global intelligence agency, single energy and medical and money cartels.

The self-styled Globalist masters are doing everything they can to export the image that we are all helpless in the face of this onslaught.

This is the primary mind-control message of the 21st century.

The question is: when we, each one of us, throws off this programming, what do we see?

What do we know?

Are these resources small or great?

How much self-imposed ignorance does it take to believe we are helpless?

How we act, what we do has no time limit. No matter how bad things get, the war is never lost.

Freedom forever is a fact. Whether we like it or not.

It is a far greater enterprise than slavery.