Posted on 12 February, 2015 by Ethan Harrison
Claiming ‘Its The Only Way To Save The World’ 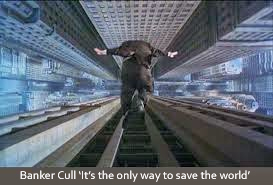 A humanist think tank composed of professors, doctors, nurses, teachers, public sector workers, university lecturers, financial analysts, journalists, philosophers, lawyers, scientists, writers, dentists and traffic wardens has proposed a cull of bankers claiming its the only way to save the world. Micheal Veritas overseeing the think tank explained, ‘A few years ago when bankers were killing themselves in ever larger numbers throwing themselves off buildings and dying in extremely suspicious circumstances it seemed as though happily we would be saved from their locust like behaviour. Since this lemming effect has experienced a sharp downturn and their numbers are growing out of control we are once again faced with the reality of mounting a cull.’The think tank has calculated the world would only actually need half a dozen psychopathic, power-crazed central bankers to run the globe’s existing fraudulent financial system. Two to run the photocopier printing the meaningless billion dollar notes needed to en-debt the countries of the world to their funny money racket. Another two to man the world banking computer, one constantly pressing the ‘0’ button devaluing the the earth’s money 10% every time, the other one to turn it and off and on again in case of technical difficulties. The other two could be used to keep the respective limousine, Learjet, skyscraper, prostitute and drugs businesses going and to appear on the TV when it was necessary to explain to the public how ‘complicated’ economics actually is. It is thought a few extra staff would be required to keep this reduced team up and running mainly for clerical duties and cleaning up the blood after one of the banker’s satanic rituals.Mr Veritas summed up the situation, ‘Unfortunately the harsh reality is the world can no longer support the current banker population. Six or seven of the thieving bastards will stretch the world’s existing resources to its limits because as everyone knows there is no limit to their inherent greed and lust for power. But as a humanist myself it would be immoral to kill them all thus removing one of the planets most primitive species. Like killing all crocodiles, sharks, snakes and wasps.’

View all posts by Ethan →
This entry was posted on 12 February, 2015 in homepage and tagged Ethan Harrison, political satire, spoof news. Bookmark the permalink.